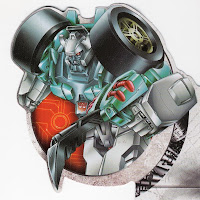 We've discussed enough Transformers toys by now that the issue of repaints (or, perhaps more properly, redecos) should be no surprise to the long-time reader. Repaints are just a fact of life for Transformers, as Hasbro seeks to maximize its investment in designing and creating molds by issuing toys from these molds in different colors. It has become increasingly commonplace to expect that a mold created for a line will be reused at least once before the line itself is even finished, let alone later for a separate line such as the original Universe line, which consisted entirely of repaints. 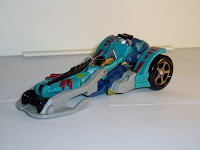 Unlike many repaints, which are often designated as new characters (or given the names of characters from long before), Brakedown GTS (released in 2006) is simply an "upgraded" form of the original Brakedown from the 2005 Cybertron line. I can't tell what "GTS" is intended to mean within the context of the Transformers story, but my best guess is "Gran Tourismo Sport." GT often refers to "Gran Tourismo" on a number of high-performance vehicles in the real world, and I've found at least one instance where the full "GTS" is used, and it apparently means "Gran Tourismo Sport" there, so there you go. It's a bit flimsy, but it's the best I've got. 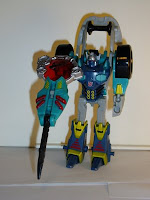 Anyway, one of the particularly interesting features of Brakedown GTS is that although it's "just" an upgrade for an existing character within the Cybertron line, the toy is also an homage to a Generation One character, namely Kup (who we discussed in a "younger" form just recently). This may make more sense if I point out that Brakedown was an "old guy" character in Cybertron (complete with facial hair to drive this point home!), and Kup's G1 personality could also be almost entirely summed up as "the old guy." In fact, there are indications that the powers-that-be at Hasbro were considering calling this toy "Kup" at one point, before deciding to keep Brakedown's name attached to it. This has led to more than one fan deciding to place this toy in their "Classics" collections as "Classics Kup," although I prefer to keep Brakedown with the Cybertron toys as intended. The colors may say "Kup," but there really isn't much else about the mold that does. Yeah, Brakedown's an "old guy," but even Kup didn't have facial hair!
Posted by Mark Baker-Wright at 12:00 AM