Loot Crate Highlight of the Month - May 2013

So, this was the third and final month of my initial Loot Crate membership, and thus the last month I'll be featuring a highlight from the box set. In the interest of protecting the surprise for those who care about such things, the reveal will come in the next paragraph (after the "Read More" link on the main page and RSS feed)... 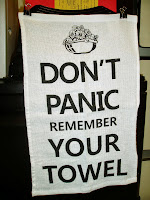 The theme this month was "Equip," and what better way to equip your galaxy-trotting hitchhiker than with this towel? The timing coincides nicely with "Towel Day," which is just three days away at the time of this writing.

Besides being an obvious reference to Douglas Adams' Hitchhikers' Guide to the Galaxy books, the message on the Loot Crate towel nicely references another meme that's been going around this past few years. Perhaps you've seen the various messages all over the internet working off of this "Keep Calm and Carry On" poster. What you might not know is that this meme originates back to the earliest days of World War II. "Keep Calm and Carry On" was one of three posters commissioned in 1939 by a publicity and propaganda wing of the government in the United Kingdom, designed to strengthen morale in the face of the attacks to come. Oddly enough, this particular poster was never used publicly (the other two apparently were), and most of the posters that were produced were lost after the war ended. Fast-forward to the year 2000, when one of the "Keep Calm and Carry On" posters surfaced in an English book store, where prints of it were made and became extremely popular. 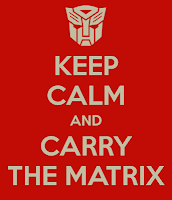 As I indicated earlier, parodies and pastiches of "Keep Calm and Carry On" have become common in the past few years. I've even done this one myself, which I posted on Facebook some time back. You can make your own at this link. If you'd like to see what other Loot Crate goodies came out this month, do a search for "Loot Crate Equip" on YouTube and you'll get a bunch of options. Then, come back and click this link to subscribe to Loot Crate for yourself!
Posted by Mark Baker-Wright at 8:30 AM No comments: