The Perseverance of Weird Al Yankovic

The odds are you've probably already heard that Weird Al Yankovic's most recent album, Mandatory Fun, has officially been named the top album on the Billboard chart this week. Although Weird Al has been doing albums for more than three decades, this has never happened before, so it's kind of a big deal. Suffice it to say, being an album of parodies and funny novelty songs, this is not the kind of thing that normally tops the charts (in fact, according to Buzzfeed, the last comedy album to debut at #1 was in 1960, by the still-living legend Bob Newhart - UPDATE 7/26/14 - I've since verified that the last comedy album to reach #1 at all was in 1963, so it's still been more than 50 years however you slice it!).

There's been a fair bit written online about how Yankovic's public relations stunt of having a new video from the album posted each day for the past week (for a total of eight videos, a high number for any album) contributed to the album's success. While I'm confident about the truth of that statement, I've found myself thinking about other reasons for Weird Al's continued popularity over so many years. Specifically, I've been thinking about how things that appear to be set-backs at first glance sometimes actually prove to have been good for us after all.

For example, it's pretty well-known that some of Weird Al's first successful parodies built off of popular Michael Jackson songs ("Eat It" and "Fat," from "Beat It" and "Bad," respectively), and Weird Al himself credits Jackson's willingness to allow such parodies of his songs with having "jump-started (his) career." What's less known is that Jackson later asked Yankovic not to do a parody of his song "Black or White," apparently feeling that the message of that particular song was too important to potentially be diluted by a potential parody. This happened right around the time that Weird Al's career was at a low-point following the commercial failure of his movie, UHF (which is now considered a cult-favorite, by the way). Because Weird Al couldn't release the "Black or White" parody,* he was forced to do something else. The "something else" eventually was "Smells Like Nirvana," which became Weird Al's biggest hit since "Eat It."

That was 20 years ago, and Weird Al has naturally suffered other apparent set-backs over that time period. It's inevitable when doing something for long enough that things don't always go your way. It even happened on the road to Mandatory Fun, when Yankovic's label, RCA, told him that they wouldn't pay to have any videos made to promote the album. I don't know what RCA's reasons were. Perhaps it's because they didn't have faith in the material, or maybe they just thought that Yankovic should do it all himself, or possibly they were reluctant to lend such support to an artist working on what was to be the last album of a 32-year contract, and thus couldn't depend on the album's success to yield future dividends. Whatever the reason, this prompted Weird Al to look for partners, and this is at least part of why each video this past week premiered on a different online channel, ensuring that a wide swath of the internet audience would see what was going on. Fans who may not care for Nerdist might well be on Funny or Die, or YouTube. One way or another, the odds were that if you were on the internet this past week, you were going to have the opportunity to see a Weird Al video.

I'm always cautious about suggesting that such set-backs might be good things to anyone still currently suffering from them. These kinds of things are most safely discussed with the advantage of hindsight, when we can clearly see just how well things actually worked out in the end. Even so, I do think these stories provide a testimony to the importance of perseverance. I'm extremely happy to see Mandatory Fun at the top of the charts. As unpredictable and unexpected as such a victory is, it is one that I feel Weird Al surely deserves.
*The parody to "Black and White," entitled "Snack All Night," was written, and Weird Al occasionally performs it. It just wasn't released commercially.
Posted by Mark Baker-Wright at 3:30 PM No comments: 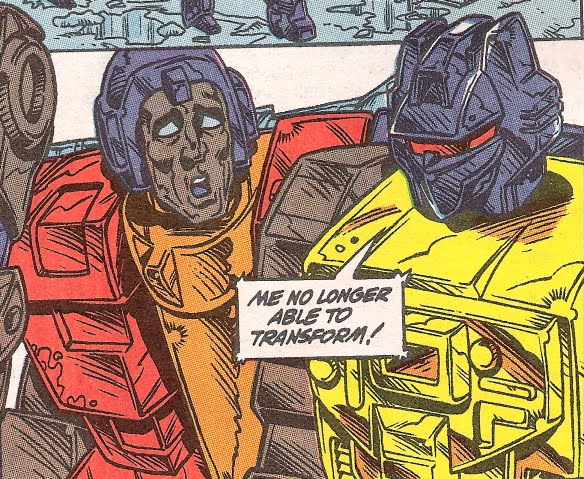 As many of you know, I have made it a bit of a hobby for the past few years to collect information regarding the various convention and club exclusives toys, dating back to the first BotCon in 1994, and collect them on what I have called "The Unofficial Transformers Club and Convention Data Pages" (at least, that's what I've called them since expanding from one to three pages sometime in late 2011/early 2012). When I started the project, I had some free web hosting space through my internet access provider, but when I changed providers several years ago, I lost that privilege, and had to find an alternative.

After a bit of research, I ended up with Zymic. Besides offering a free service, they gave me the ability to change from an unwieldy multiple-directory URL to a comparatively clean one: http://gbblackrock.zzl.org/

Over the years, Zymic has become increasingly difficult to work with. Site outages would crop up from time to time, with no real timeline for getting fixed. Usually, these would be fixed within a day or so, and so while this was annoying, it was never more than a nuisance. After all, the site doesn't generate a large amount of traffic, except perhaps during convention season.

Since about the time of BotCon 2014, however, the situation has gone from nuisance to unacceptable. While I was able to make an update on the Friday of the convention, I have been unable to access the site since, nor upload any of the further updates I've since been able to make to my master files. I did not actually discover this problem for a couple of days, as I was away in London for about a week, and thought that the problem might somehow (don't ask me how) be related to accessing the site from so far away. When a conversation with a fellow fan online assured me that no one could access the site, I realized the problem was more widespread, and upon my return to the States a few days ago, I started to look into the problem with Zymic.

Unfortunately, I have been unable to get any concrete information from Zymic directly. The Twitter account they set up for announcing server issues hasn't been updated since February, and their webmaster forums have been "offline for a spot of maintenance" for quite some time (I can't verify exactly how long, though). An e-mail to their administrator address has gone unanswered, as have tweets (from people other than myself) asking for more information. I am left to assume that the service has simply been abandoned.

There is, obviously, truth to the mantra, "you get what you pay for," but since there is little expectation that I will ever generate income from the site, I see no point in paying for a more stable server. This is a hobby. Not a job. It's supposed to be fun (both for myself and for those fans who use the site).

So this brings me to my reason for posting. What do you guys think? Is this a site worth saving? Do you find it useful? What effort should I undertake to move it elsewhere? If I choose to do so, what are my best options?

For those who may have been unaware of the site until now, you can still see an archived version (obviously not updated with the most recent information) via the Internet Archive's Wayback Machine.

Thanks for any and all comments!
Posted by Mark Baker-Wright at 3:40 PM No comments: