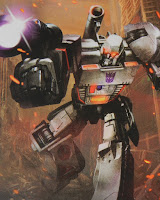 I have tended to consider May 8th, 1984 the "birthday" of the Transformers, working from the publication of the first issue of the Marvel comic. However, other dates are possible. Surely the commercial that advertised that very comic aired at least a few days earlier, although I know of no way to document that for certain. "CrazySteve" (aka "Evil King Macrocranios") over at "The Roboplastic Apocalypse" (who I was pleased to chat with briefly at TFCon Los Angeles last month, possibly for the first time in over a decade) found an ad for Transformers at Zayre that he can source to April 29th, 1984 (thanks to Radio Free Cybertron for pointing me in his direction). I honestly don't recall whether or not toys had started showing up in stores by this time (much less an exact date), so this date wins for now. Still, although I'm missing the anniversary of that advertisement by a few days, this seems a good time to say "Happy 35th Birthday, Transformers!"