The third set of "BotCon souvenirs" has nothing to do with the "Wings of Honor" story whatsoever. It's called the "BotCon Anniversary Pack," in honor of the 25th Anniversary of the Transformers franchise and the 15th Anniversary of BotCon, which also happened to be the 5th BotCon put together by Fun Publications. Both of the figures in the set were featured in previous BotCon stories, although no figures were made of these characters at the time. Even back then, it was clear enough that the characters were patterned off of existing molds such that exclusive toys could be made, and there have been a significant number of fans asking for these figures. Razorclaw was featured in a cameo at the end of the BotCon 2006 story, "Dawn of Future's Past." 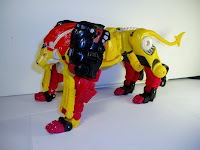 BotCon Razorclaw is a redeco of Cybertron Leobreaker, transforming into a mechanical lion, an homage to the original Razorclaw, one of the Generation One Predacons from 1986. BotCon Razorclaw's Tech Specs suggest that, as the Decepticons were facing defeat at the end of the war against the Autobots, Razorclaw forged a new team of Predacons to continue the fight. These new Predacons are intended to be the faction that was featured in the Beast Wars line. Razorclaw disappeared at about that time (apparently believed to be assassinated), only to re-emerge some time after the Beast Machines series (at the end of the "Dawn of Future's Past" story) vowing that the Maximals would "again tremble before (his) might." What happens next has never been told, and it's rather uncertain that this story ever will be finished, but at least fans finally have the toy they've been asking to get for about three years now, complete with the "post-Beast Machines" Predacon symbol created specifically for Razorclaw in that cameo.

Razorclaw has been given a remolded head, which completes the homage (unfortunately, mine's missing a couple of paint applications on one side of the head!). A few months before the convention, Hasbro released another repaint of Leobreaker with a remolded head, Leo Prime, causing fans to wonder (when rumors of a Razorclaw exclusive began to surface) whether Fun Publications would use the Leo Prime head (which has a number of general similarities to the original Razorclaw head, but which is clearly a "Prime" design), or "waste" the effort to create a "similar" head, as BotCon 2008 Blurr and the BotCon 2006 Arcee repaints Chromia and Flareup are often accused of having. Pete Sinclair made a comment online indicating that he didn't like the Leo Prime head for Razorclaw, but it wasn't revealed until the convention itself that Fun Publications actually didn't know Hasbro's intentions for Leo Prime at the point when plans for Razorclaw were being made. If they had, there would undoubtedly have been a lot pressure to use the Leo Prime head instead of one created specifically for Razorclaw, and Pete indicated being glad that they didn't have to make that decision, preferring the head created for Razorclaw quite a bit. 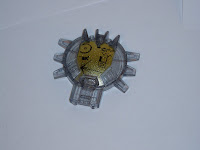 Razorclaw comes with a Cybertron-style "key," but this one is painted up with a "Golden Disk" pattern in a similar fashion to other figures in the BotCon 2006 set, and is therefore called a "Golden Disk" key. Plugging this key into Razorclaw's arms will activate spring-release claws.

Although the "BotCon Anniversary Pack" was a convention exclusive, Fun Publications made 2000 sets, and these did not all sell out before the end of the convention. Remaining sets can still be ordered from the Transformers Club Online Store for the same price as they were sold for at the convention itself (minus California's 9.25% sales tax, but plus shipping).

EXTRA: Members of the Fun Publications staff went to see a taping of The Price is Right when they were out here for the convention, and one them got called up on stage! The episode aired today, and you can catch it at CBS.com tonight, and for the next couple of weeks.
Posted by Mark Baker-Wright at 12:00 AM