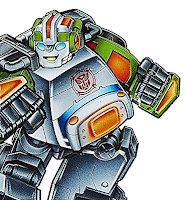 It's no secret that people everywhere are thinking about things related to the medical profession these days. I'm no exception, and so have decided to focus on a few medical-profession Transformers characters that I haven't featured before for the next couple of weeks. For this entry, I'm focusing on the "Rescan" version of Rescue Bots Medix.

Over the years, there have been several attempts to bring the Transformers franchise to preschool-aged children. Of these, the Rescue Bots line has inarguably been the most successful. Beginning toward the end of 2011, toys related to the line have been available ever since, and the original Rescue Bots cartoon (which started at about the same time) actually holds the franchise record for the longest-running cartoon, both in terms of episode count (104 episodes) and in number of seasons run (the only series to be produced for a full fourth season).

While it would certainly be a stretch to suggest that all transformable robots not made by either Hasbro or Takara try to take advantage of the popularity of the Transformers franchise, specifically, there are numerous examples of such toys that unmistakably attempt to either homage or replicate (some might say "steal") Transformers-specific characters and concepts. The "Tactical Officer" from Junkion Blacksmith is a toy that actually manages to homage two Transformers-specific concepts simultaneously.