Why Transformers Fans Hate Action Masters So Much 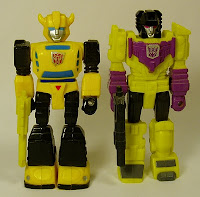 Well, this and that whole "not transforming" thing....
Posted by Mark Baker-Wright at 12:00 AM No comments:

The Insecticons are among the more memorable characters from Generation One. I'll need to do a feature on the whole set before long, but some unexpected events of the past week dictate that I don't have time to do a full review right now. In the meantime, here are some pictures of the two existing toys created of the Insecticon Bombshell. First, the original Bombshell in insect mode.

Next, the Action Master version, which was never available in the United States, alongside the robot mode of the original Bombshell.  For whatever reason, Bombshell is the only Insecticon character to be given an Action Master.
Posted by Mark Baker-Wright at 12:00 AM 2 comments:

It sometimes seems that there's a holiday for every occasion, even if very few people are aware that it exists.  Such is the case with "International Left-Handers Day," which has existed (if perhaps "celebrated" is to say too much) on August 13th every year since 1976.  Such is the lack of attention given to this day that, according to this 2006 piece from Washington Post writer Bill O'Brian, "the organization that started the movement is defunct."

Even though I myself am one of the 7-10% of the human population that is left-handed, I was unaware of the observance until just a few weeks ago.  Such a day deserves not to be forgotten!  People need to be aware that we're out there.  Although it's no longer as common as it was in my Dad's generation to force a child to use his or her right hand (we're actually pretty sure that my Dad is left-handed, but because he was pushed into right-handedness at such an age, we'll never be completely sure), the world still imposes right-handedness onto those of us who simply aren't all too often.  Many devices, for example, are constructed so as to be difficult for left-handed people to use with their naturally-dominant hands.  I remember being in elementary school, looking through the crafts box in vain, trying to locate one of the few "Lefty" scissors still in there, only to have to force my way through using the regular scissors to complete my project with less-than-stellar results.

Even today, when I go out to eat with a large group, I often make an effort to get one of the left-hand corner spaces at the table, so as to not bump elbows with a person eating right-handed to my left while I attempt to eat (my wife, happily, is left-handed as well, so we can still safely sit next to each other, provided that one of us has the necessary corner!).

I certainly don't want to make the case that left-handed people are oppressed in the same way that other minorities are oppressed (although O'Brian's somewhat tongue-in-cheek observations to this effect are quite interesting), but since we do have to make a not-insignificant number of sacrifices to live in a predominately right-handed world, I don't think it's asking too much to have the fact of left-handed accommodation recognized.

So, left-handed people of the world, unite!  This is your day!  More information (and a few links) can be found at http://en.wikipedia.org/wiki/International_Lefthanders_Day.
Posted by Mark Baker-Wright at 12:00 AM 1 comment:

Transformers Then and Now: Brawn

The Legends class of figures has often been neglected by retailers.  This is more than a little unfortunate, since it has been a venue for reimagining some of the more obscure characters from the early days of Transformers history.  Cosmos and Warpath were both characters originally used in the 1985, but Brawn goes back to the very first series of Transformers toys from 1984, and the recent 2008 Legends version was the first new-mold use of that character since then (although the name can be argued to have been used in the interim--for what it's worth, I also consider the recent 2010 movie toy to be a different character). 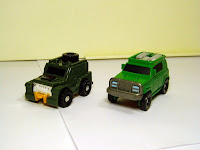 Pictured on the left is the original 1984 toy, while the 2008 version is on the right.  As has been common with many of the "updated" versions of old characters in recent years, the 2008 version transforms into a somewhat different type of vehicle than the 1984 version--more Hummer-like than Jeep/Land Cruiser-fusion.  Even so, the color scheme helps create the basic feel that this indeed the same character (well, mostly.  It is a rather different kind of green). 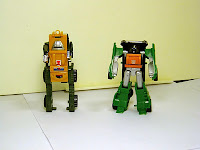 One can easily see the effort that went into homaging various aspects of Brawn's 1984 toy in the 2008 version.  Not just in the coloration, but also in various molded details.  One significant difference between the toys is the design of the head.  Brawn's 1984 toy was, of course, originally created for the non-Transformers Microman line, and his Transformers character model was heavily modified for the cartoon and comic (as was the case with nearly all of those first couple of years' worth of toys).  Thus, the 1984 toy's head looks much less expressive than the version we came to know as Brawn in most of the fiction.  The 2008 toy attempts to capture the basic look of the character model, yet for some reason gave him a black face and white helmet, where the character model would have been more faithfully represented had they done the reverse.  Oh, well.... 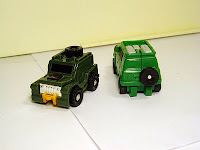 One other clear homage in the figure is in the vehicle mode, but it can't really be appreciated in the front-on shots above.  If you turn the 2008 version around, however, you can see that it was given a spare tire, much as the 1984 version has on top of the vehicle.  It's a small touch, to be sure, but I really do appreciate the effort that went into creating these updates.  I just wish that more stores carried them when they were being made.  Despite traveling to every Rite Aid (the only chain that was carrying Legends at this point in time) I could find in the area (I haven't kept count, but this is well over a dozen different stores), I never did find this toy on the shelves, and ultimately got it from eBay using some eBay Bucks I'd saved up.  I'd love it if Hasbro would just straight-out reissue this wave (as they've done for similar figures in the past.  Perhaps through Big Lots?), but I'm not holding my breath.
Posted by Mark Baker-Wright at 12:00 AM No comments: