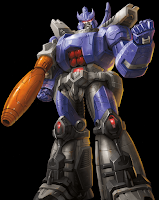 When I discussed the Titans Return line while featuring (perhaps ironically) Legends Blurr, I mentioned that the Headmaster-like gimmick was applied to nearly all of the toys in the Titans Return line. What I didn't spell out was that a very intentional part of that gimmick was that all of the small "Titan Master" heads/robots were sized so as to be interchangeable with all other "Titan Master" figures. That is to say, I could take the head off of Blurr and switch it with the head from Six Shot, giving Blurr Six Shot's head and vice versa, despite the fact that the two main robots are significantly different in size. This commitment to keeping all of the "Titan Master" figures the same size, even for the large robots, was achieved via a series of "cheats," which a review of Titans Return Galvatron will make clear. 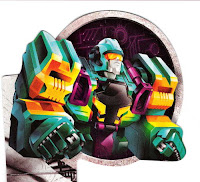 The realities of rising prices and increasing production costs have meant that some once-common size-classes of Transformers toys are now considered things of the past. One casualty of this phenomenon is the "Scout Class," once the go-to size to get a decent fully-featured character for under ten bucks. Coming out as part of the Cybertron line, Hardtop is a good example of this class.