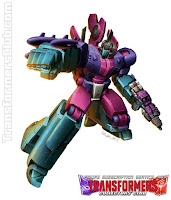 This week, Hasbro is starting a promotion whereby fans can select pairs of characters to be featured in an upcoming toyline. As it happens, each pair features one G1 cartoon-era Autobot alongside some lesser-known character who (coincidentally, I'm sure) happened to be featured in the fourth "Transformers Figure Subscription Service" by the now-defunct Transformers Collectors' Club a couple of years ago. I doubt I'll ever have a better reason to feature these lesser-known characters, so I'm taking advantage of the opportunity.

On February 19th, 1968, a mild-mannered man in a cardigan sweater introduced himself to the nation.

He wasn't completely unknown at that point, of course, having worked in Canadian television for a few years, and for a local Pittsburgh public station for a few years both before and after that. And he'd had other experience, mostly behind-the-camera, before that. In fact, by the time Misterogers' Neighborhood (as it was originally known) first aired nationally, Fred Rogers was already nearly 40 years old, and had been working in the television industry for the better part of two decades. More or less ever since his graduation from college with a BA in Music Composition.