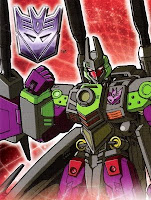 In addition to the box set and "attendee freebie," there are always a couple of "souvenir" sets of exclusive figures you can buy at BotCon, but which are not officially announced until the convention actually begins. At BotCon 2009, there were actually three sets. I mentioned one already--the Sweeps--when I featured Scourge. Banzai-Tron was one of the two figures in one of the other two sets. The set with Banzai-Tron was referred to at the convention as the "Wings of Honor Villains" set, since both figures in this set were Decepticons that featured in the BotCon 2009 comic story. We'll get to the other set in a couple of days. 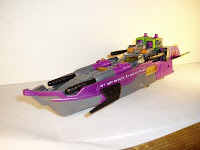 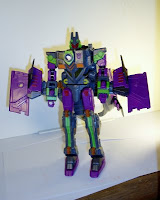 Of course, BotCon Banzai-Tron is a repaint of a previously existing figure: Energon Mirage. Although no remolding was done to Mirage to create Banzai-Tron, it's a surprisingly good match. The head shares enough of Banzai-Tron's distinctive characteristics to clearly be the former (or is that future?) Action Master character with nothing more than a few paint applications. 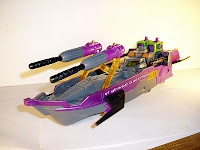 Decepticons in the Energon line tended to feature pop-out weaponry, and so Banzai-Tron inherits this feature. Here you see Banzai-Tron's vehicle mode with the front missile launchers deployed. Another feature of the vehicle mode worth drawing attention to is the Cybertronian lettering on the side. This says "To the victor go the profits," which happens to be Action Master Banzai-Tron's Tech Specs quote. Unlike Legends Cosmos, where we just have to accept it on faith that the lettering on the toy actually spells Cosmos' name, the lettering on BotCon Banzai-Tron actually conforms to the Cybertronian alphabet created for AllSpark Wars, an online site (although it conforms to the "Autobot" variation rather than the "Decepticon" one). Gotta love that attention to detail! 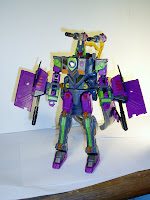 Banzai-Tron's pop-out weaponry can be deployed in robot mode, too, although it makes the figure even more unwieldy than it already is to start with. In fact, that's my only real gripe with this toy. He's got a HUGE amount of vehicle kibble hanging on his back and his arms that makes playing with the toy awkward, at best. Still, the mere fact that an Action Master character who'd never had a vehicle mode before finally has one (although this isn't the first time this has happened) is a huge plus, and this toy is really worth picking up on the merits of that reason alone.
Posted by Mark Baker-Wright at 12:00 AM