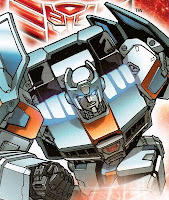 Of the four "Elite Guard" Autobots featured in the five-toy "Wings of Honor" box set, Kup is by far the best-known. His character was introduced in the 1986 animated movie, and is probably most easily described as "that old-guy Autobot." Seriously, being ancient was Kup's major defining trait. His scenes with the Dinobots in that movie convey the idea of an old guy sitting in a rocking chair telling stories of "how things used to be" to the neighborhood kids. 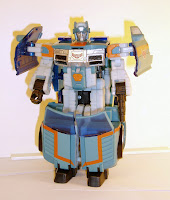 One major benefit of having an old-guy Autobot is that it implies the presence of a familiar character in an unfamiliar time. You can tell a story of times gone by while retaining someone that readers will still be somewhat familiar with, just by saying that this story takes place when that old-guy character was young. And so, with "Wings of Honor," we get a story of the beginning of the Cybertronian Civil War, when the Decepticons were only just beginning to make themselves known as a threat. Indeed, the story hammers that point home by having Kup be the youngest member of his crew. 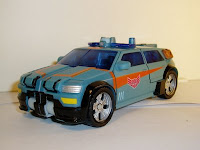 Because of my previously-stated ignorance of car makes and models, I have to take other people's word for it that Kup (who, like all convention exclusive toys, is a recolor of a previously created toy, Cybertron Red Alert in this case, but with a new "Kup" head) transforms into a modified Dodge Magnum, which of course isn't the type of vehicle one would expect on an alien from roughly 9 million years ago. This kind of thing has happened before, and it's best not to think about it too hard. 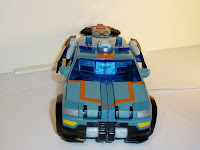 As with all Cybertron-era molds, Kup features a "Cyber Key" which unlocks some feature or another. In this case, the feature is a couple of flip-out rifles that can be deployed in either vehicle or robot mode (although, in my opinion, they work in vehicle mode much better!). 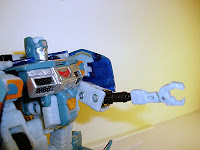 One potential pitfall of having to use already existing molds to re-create well-known characters for whom the mold was not originally intended is having to find some plausible explanation for why the new toy has a feature not previously associated with the character (or doesn't have a feature one expects the character to have). The Red Alert from the Cybertron continuity was one of those rare characters (like Shockwave) that had a gun instead of a fist at the end of one arm. Red Alert would use this arm to attach various tools and gadgets, totally in keeping with his role as a doctor. But up until now, Kup has always had two hands, so the writers decided to say that he had a previously-unattested "manufacturing glitch" whereby he could detach and re-attach joints at will. This explains why Kup can use the claw and the hammer (as seen below), but honestly it makes him seem more like a Junkion than I think the writers intended. 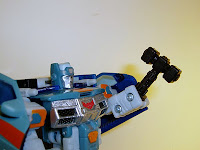 Between the vehicle mode and the missing hand, a lot of folks argue that Kup should have been given a different mold, or (if the mold had to be used) that a different character should have been used altogether. Perhaps. I'm not able to look into some crystal ball and say what possible options that might have been chosen would have worked better. I can just comment on the ideas that I'm actually presented with. For better or worse, this is what we got. Honestly, I don't think it's a perfect fit, but its certainly close enough that I can accept it.
Posted by Mark Baker-Wright at 12:00 AM