Although the Transformers franchise has always been primarily about giant transforming robots, the folks behind the fiction have generally sought to include a human element to the saga from the very beginning. But the proportion of human representation in the toyline itself has always been fairly low. While this perhaps isn't an exhaustive accounting, I'll try to cover the bases.

The first attempt to include figures of human characters came in Generation One, with the advent of the Headmasters and Targetmasters (and, later, Powermasters). Technically, these aren't humans, but an alien race called Nebulans. However, in the Marvel comics, Nebulans were all but indistinguishable from humans, so I'll include them (and, Spike, the "Nebulan leader" who came with the original Fortress Maximus, was a human).

I suppose I could make a case for the Pretenders as being "human figures," but in this case, the toys were never meant to actually be human characters, but merely to "pretend" to look human, so I'll make do with a link to Pretender Bumblebee.

That was pretty much it for the original Generation One, but the next attempt I've been able to locate, in 2001, was also Generation One-related. Takara released a series of PVCs of popular characters, and although the focus was decidedly on the robots, there were a couple of human-character PVCs released alongside robots with whom they had some connection. Minerva here, a Japanese Headmaster character, originally just a repaint of the American Nightbeat toy, was released with a Metalhawk PVC figure, but only in Japan. A Spike PVC was released with a Bumblebee PVC, both here and in Japan, but I no longer seem to have that figure.

The next attempt to create a figure for a human character in the Transformers franchise came in 2005 with Energon and Kicker, the human figure that came with Deluxe-sized High Wire. Finally, we're given a fully-articulated G.I. Joe-sized figure (the only human character to be given such official Joe-like toys in the Transformers franchise to date). Sadly, since this picture was taken, my Kicker has suffered the fate of many others, in that the rubber O-ring that holds his torso and legs together has disintegrated and fallen apart. Although I have attempted a repair, I'm none too happy with it. I'm really pretty annoyed at Hasbro for constructing this figure in such a way that it cannot be disassembled without doing damage to the figure (there is a differently-constructed Kicker figure in the Takara line. I haven't heard whether or not that one has this problem).

A short time later, Hasbro—which also owns the rights to the Star Wars action figure line—started releasing some Transformers toys of famous Star Wars ships that turn into robots resembling the characters of that "galaxy far, far away." A few of these also came with little human figures that fit into the vehicles. However, I'm not really counting these, as the Star Wars franchise really is its own thing.

Fast-forward to 2007 and the first live-action Transformers movie. A few "Screen Battles" sets came with figurines of human characters such as Sam Witwicky and Mikaela Barnes, in fixed poses relevant to a diorama-style action scene the set enabled you to create. Owing to my distate for movie figures, I've never bought these, but here's a link to an image from the TFWiki.

I've not stayed completely away from movie-related toys, however. After the second movie, Revenge of the Fallen, came out, a line of "Human Alliance" toys were released, containing small-but-articulated human figures designed to interact with the robot the figure was packaged with. Although I never picked up any of the original figures, I have recently picked up one of the smaller "Human Alliance" figures released with the latest movie, Dark of the Moon. This toy features an astronaut packaged with a dune buggy that's supposed to pass as a lunar rover. 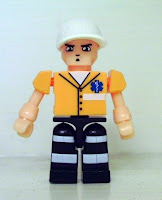 Finally, we have the recently-released KRE-O line of toys, which are basically LEGO sets done by a non-LEGO company (that is, Hasbro). My local Target had the Ratchet sets on clearance, and so I picked one up. The "Kreon" figures meant to represent the actual Transformers are admittedly far more interesting, but this human medic is more relevant to this post. Most sets that include "Kreons" include at least one such human character.

There has always been a good deal of debate about how much the Transformers franchise should feature humans, either in the fiction or in the toys. Personally, as long as they don't overwhelm the attention on the robots themselves, I see no problem. And as long as they are doing human toys, I'll still keep petitioning for an official G.B. Blackrock figure!
Posted by Mark Baker-Wright at 9:30 AM No comments: