BotCon, the official Transformers convention, has come and gone. As I indicated earlier, I did not go. Both the cost and the timing made it impossible. However, I have been able to keep up with most of the news via several Transformers news and message boards. For the most part, it seems that the convention was fairly well run, but the general feeling I get from many of the fans who attended is "they really don't get us."

By way of background, Fun Productions (henceforth referred to as "FP"), the current organizers of BotCon, have been running the GI Joe convention for nearly a decade. This is the first year that FP has organized the Transformers convention, and so they largely adapted the model for toy conventions that they know: that of the Joe convention. It was largely understood by everybody that this was the best way to do the convention in a short span of time (9 months after getting the license), and that while not everything would work as well for Transformers as they did for Joes, it was better do it this way than the reinvent the wheel with untried (or previously tried and failed) methods. Even though FP often took a "trust us, we know what we're doing" attitude that largely alienated Transformers fans with legitimate criticisms, many of us decided that it was best to wait until after this convention was over and allow FP the benefit of the doubt.

So, did they know what they were doing? In large part, yes. However, the dealer room was quite a bit smaller than usual. The art room was decimated to the point where all the entries fit on a small table, and the expensive exclusive toys were produced in such small numbers that no one who wasn't there will ever be able to afford any on the secondhand market unless they have tons of disposable income. Perhaps this web comic explains some of the feelings the best.

But probably the most telling sign that FP doesn't understand Transformers fans was the dinner. I found this statement at the Allspark forums:

The dinner was a perfectly good beef meal. For everyone. There was no spot on our prereg forms to specify if we wanted a different meal. Can't eat beef due to religious or medical reasons? Allergic to one of the other items on your plate? You're gonna have to send it back, and you're gonna have to wait up to half an hour for something else. Real American Heroes don't have such pissant concerns.

Mr. Savage made absolutely no effort to cater to vegetarians, or anybody who might not want to eat beef. This might work fine for Joe fans (who, as a commenter has observed, are a more "Republican" group. Not suprising for fans of a military toy line), but Transformers fans are a more diverse bunch, and people might not want a "red-blooded-American meal" for a variety of reasons: personal, health, religious, etc. While non-beef eaters were eventually given other options, it was only after they sent back their steak and complained, and then they had to wait half an hour. Even worse was this story, which tells of a person who can't eat mushrooms, who turned in his steak with mushrooms only to recieve chicken with mushrooms!

But even more disturbing was the fact the Mr. Savage interrupted the meal for a prayer. I first learned about this through a throwaway comment on Walky's blog, but this paragraph after what I just quoted from Allspark says it much better:

About 10 minutes into dinner, Savage came over the PA to lead us in saying grace. Maybe this goes over okay with the Joe fans. We're not the Joe fans. Everyone with an interest in saying a Christian prayer over their meal had already done so, with their own families around their own table, well before Savage chimed in. Everyone else was embarrassed or offended. But it's okay, because Jews and other undesirables aren't Real American Heroes.

Mr. Savage not only alienated a lot of non-Christian Transformers fans (which, I'm sad to say, is probably the majority of Transformers fans), but he embarrased most of the Christians, who (as was already noted) had already said grace if they were so inclined.

I have to admit to being rather torn on this one. As an evangelical Christian, I'm not unsympathetic to the argument that Christians should not be afraid to demonstrate their faith, even in secular, public forums. But this crosses a line for me. Mr. Savage wasn't just demonstrating his faith, he was forcing everyone else to participate in it. While I do believe that Christianity is the "one, true, way" (even though I'm not willing to be any more specific as regards any Christian denomination), I do not believe that one should force someone to participate in a Christian act of worship. A person comes to Christ themselves (or more properly, through an act of God), if at all. They cannot be forced into it. The prayer at the BotCon dinner was totally bad form.

So, the end verdict? Lots of style, but the substance leaves a lot to be desired. Time will tell if FP has learned from the experience.
Posted by Mark Baker-Wright at 8:10 PM No comments:

In that vein, I'll try here to give a little bit of background on one of the main characters. The Autobot known as Bumblebee.

Now, the first thing you need to know, when I use the term "Autobot," I'm referring to the "good guy" faction of Transformers. There are a few others, most notably the "Decepticons," who are the usual "bad guys." Now that we're clear on that, on to Bumblebee himself.... 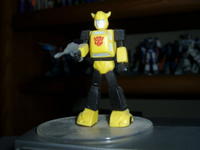 In the Transformers cartoon, Bumblebee is most familiar as the Transformer who spent all his spare time running around with the main human character, Spike. Because of Bumblebee's comparative small size, he was able to interact more easily with humans, and he had a very warm and likeable personality. 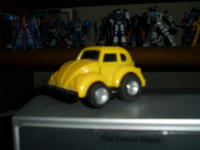 Bumblebee was able to transform into a small, yellow, Volkswagen Beetle. While not quite as ubiquitous as "Herbie" back in the early '80s, this made him instantly recognizable. 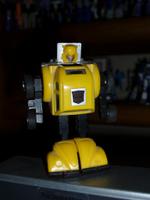 The original toy version of Bumblebee was one of the less expensive Transformers available back when the line first came out, which no doubt added to his popularity. His transformation was very simple: push the arms in, fold the feet down and push the legs up, fold the head over, and you're done!

This character was so popular, in fact, that three other toy versions of Bumblebee were made available by the time the original line ended in 1990, representing six of those seven years (1988 seems to be the odd year out) making Bumblebee the most readily-available character of the original Transformers toy line!
Posted by Mark Baker-Wright at 10:00 AM No comments: