Video Game 30th Anniversary of the Month - Mr. Do!

As the year 2012 comes to a close, I find myself tying up loose ends. The bulk of my attention this past couple of months has been in some combination of the usual Christmas preparations with a move out of the apartment my wife and I have lived in for the past eight and a half years. I finally got the last of our personal belongings moved out of there this morning. Of course, the task of properly moving into our new home has barely begun! But, for now, that can wait. With the original Star Wars trilogy playing in the background as we await 2013, I have one more blog entry to finish up before the ball drops: the final video game 30th anniversary of 2012: Mr. Do! 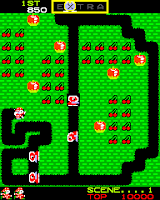 At first glance, Mr. Do! is similar to Dig Dug. In both games, the main character digs through an underground playfield while trying to avoid various enemies which can be defeated by dropping objects on them. The games diverge from that point, however. Far from being a suited-up subterranean miner, the main character in Mr. Do! is a clown which seemingly has no business running around in underground caverns, and the addition of cherries set in groups of eight around the board adds to the whimsical randomness of this game. Unlike Dig Dug, where one can only advance to the next level by defeating all of the enemy characters on the board, the player may advance in Mr. Do! simply by grabbing all of the cherries (other ways to advance include the completion of the word "EXTRA" at the top of the screen — more on this in a bit — or by grabbing a diamond that could appear on the board at random. Grabbing a diamond not only completes the board instantly, but also awards the player a free game — a rarity among coin-operated video games).

While Dig Dug could inflate and destroy enemies through the air pump he carries with him, Mr. Do carries around with him a "power ball" that he can not only shoot at monsters in a straight line, but actually around corners! The power ball will zig-zag along its path until it either destroys an enemy or returns to Mr. Do's hands. Of course, once a power ball is released, Mr. Do cannot shoot another until it returns to him (which it will do automatically several seconds after destroying a foe). The other main way to destroy enemies is by dropping apples on them from above. Unlike the rocks in Dig Dug, you do not have to approach apples from underneath, and then walk away (although this works much the same as with the rocks in Dig Dug). You can also push on apples from the side until they reach an existing pit, at which point they will drop down. 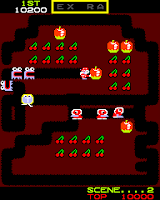 Like many games of this era, Mr. Do! also has a bonus target that appears in the middle of the screen. It usually takes the form of an obvious food item that may be eaten safely once all of the monsters for the round have departed the "base" at the center of the board. Eating this food item not only awards points, but also freezes the monsters while a new group of monsters enter the game from the top of the board. The last of these monsters will be an "Alphamonster" containing one of the letters in the word "EXTRA." Destroying this Alphamonster wards the player that letter. If all of the letters in "EXTRA" are earned, the round ends immediately, and the player is awarded an extra life. Although the game rotates through each letter periodically, including already-earned letters, if the player times the approach to the food item just right, one can arrange for the exact letter one needs to be made available. The Alphamonster will also appear (without freezing the rest of the board and without his blue buddies) whenever the player's score hits a multiple of 5000 points, affording additional chances to earn "EXTRA" letters. Don't expect to defeat the Alphamonster or his blue friends easily, however, as they will simply eat any apples in their path, including most (but not quite all) apples dropped from above. To beat these guys, you generally have to use your power balls, and remember that you only get one at a time!

I've enjoyed revisiting some of these classic video games from my childhood. I still have business to take care of before resuming my regular blogging schedule, but hope to do so within the next couple of weeks. See you in 2013!
Posted by Mark Baker-Wright at 10:00 PM No comments: