For several years now, I've tried to include packaging art with features of Transformers toys. In the case of Generation One toys, this hits a certain "nostalgia factor" for me, while in the case of later generations of Transformers, this is intended to help supply a source of such artwork where no archive has been known to have been created. While I certainly do not have the resources to create such an archive, myself, I hope that I'm making the job that much easier for someone else. That said, Transformers packaging artwork doesn't always match the toy that it's created to help promote especially well. This set is a particularly egregious example. 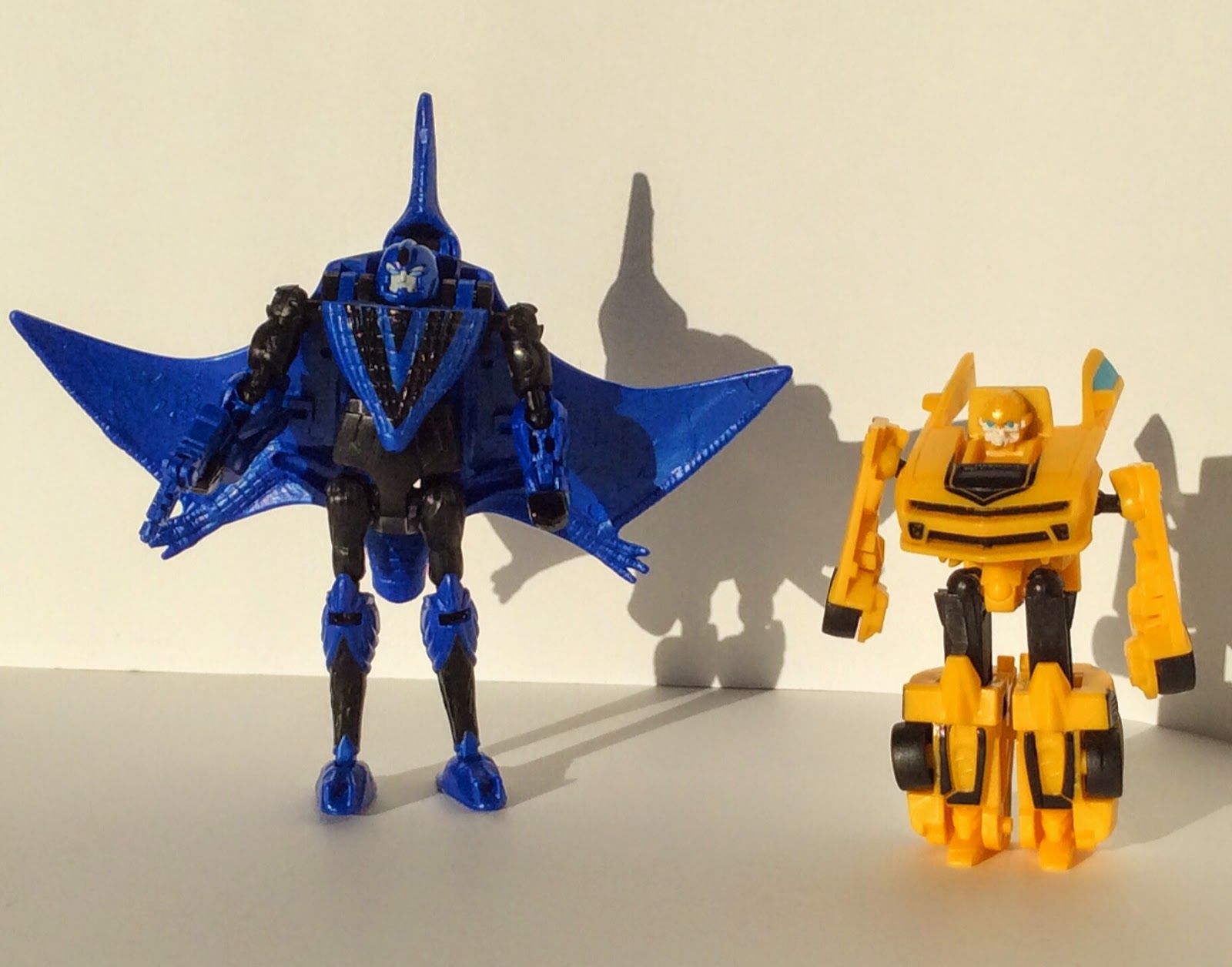 With the release of the most recent live-action Transformers movie, Age of Extinction, several of the main retailers have exclusive product on the shelves, and Walmart is certainly no exception. This Bumblebee and Strafe two-pack (for those who don't know, Strafe is on the left, and Bumblebee is on the right) is just one of several Walmart exclusive sets that were recently made available, and like most of these sets, it uses old molds that have been repainted to (more or less) resemble characters from the movie. The artwork in this case, however, doesn't even bother trying to emulate these particular molds. The picture at the top of this entry, which spans the top of the package, simply represents characters from the movie, but although the robot on the left is indeed a Bumblebee (if not quite this Bumblebee) the other robot depicted is a red robot, which isn't in keeping with any version of the Strafe character I've seen thus far. As it happens, this isn't even Strafe at all, but rather is a character named Stinger instead. The intent was apparently to do a generic "battle" image, and this image does indeed show up on most (if not all) of the current batch of Walmart multi-pack exclusive sets. But given the inclusion of a Bumblebee, I think it's definitely a bit misleading. 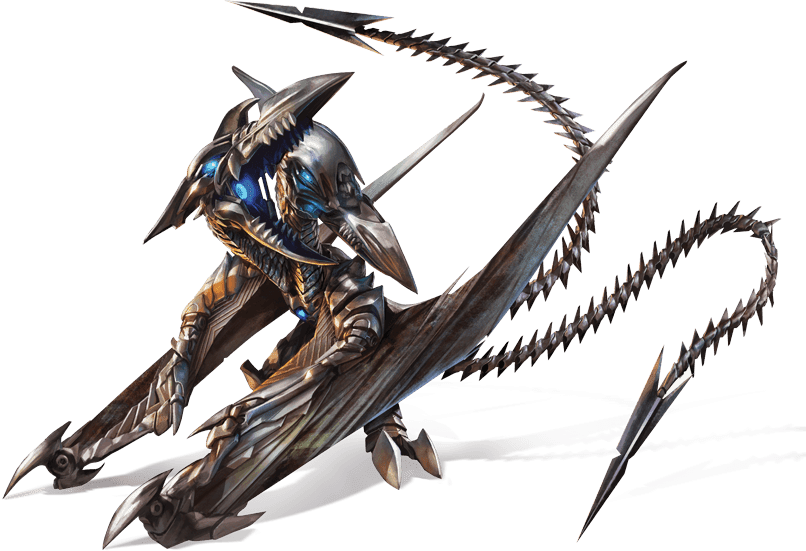 Of course, this isn't the only artwork on this package. The right-hand side of the box has this bit of artwork (the version on the box is partially obscured by an explosion with the Age of Extinction logo. This version is a clean variant), which does indeed represent Strafe as seen in the movie, but again, it's not remotely relevant to the toy actually in the package, which turns into a single-headed pteranodon, as opposed to this two-headed, two-tailed monstrosity from the film.

As I indicated earlier, this two-pack features old molds. Molds that were originally created to represent other characters entirely. This really isn't a big deal in the case of Bumblebee, as the character looks more or less the same despite a number of cosmetic changes. While the art doesn't really depict this Bumblebee very accurately, he's more or less identifiable, so I've chosen not to spend much time talking about him. The mold used for Strafe, on the other hand, was created for Beast Wars Terrorsaur, which was originally available in 1996, nearly two decades ago! (Indeed, this may be the oldest mold to be used for something other than an actual reissue, if one accepts oddities like "Diaclone colors Ultra Magnus" or "Shining Magnus" in that category, and even that mold wasn't as old at the time of those toys' release as the Terrorsaur mold!) While the blue color is certainly in keeping with Strafe's other toy portrayals (if, again, not as he appears in the movie or in that artwork), there's no getting around the fact that this one-headed, more or less organic-looking, beast simply isn't the same guy as the shrapnel-monster from the movie.

That's okay. I wouldn't have picked the toy up if it was. I wanted a blue Terrorsaur, not a hideous movie-beast.

Still, I'd have wished to have packaging art that was actually relevant.

Posted by Mark Baker-Wright at 10:30 AM No comments: 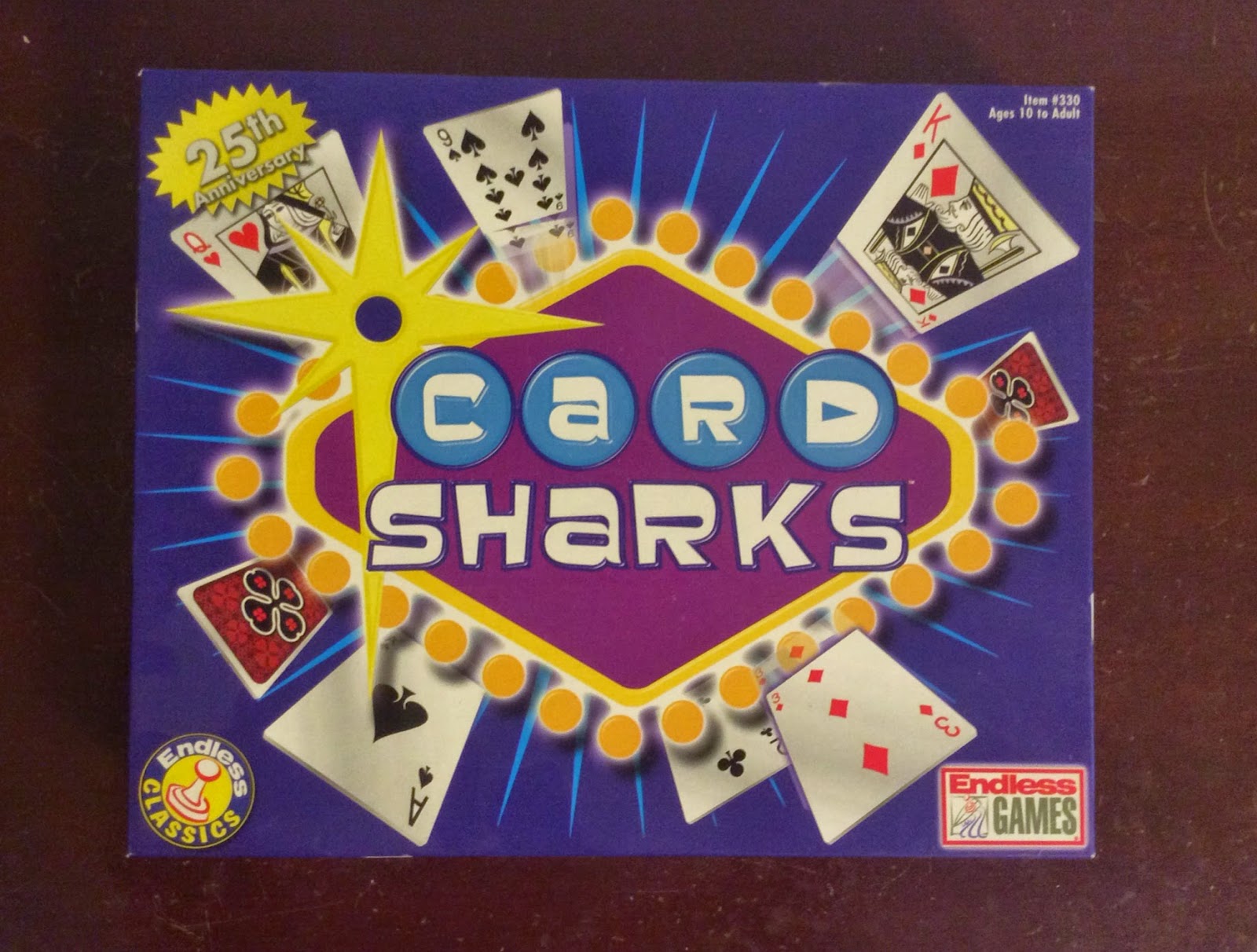 Card Sharks is one of those shows that's due for a proper revival. It's now been 13 years since the most recent version was on the air (which, itself, is about how long it had been between the most recent version and the one that came before it). This version of the board game is dubbed the 25th anniversary version, despite coming out just a touch early (in 2002. The show premiered in 1978). It's actually a bit unusual among game show board games in my collection, in that it was sold without any version of the show currently on the air. 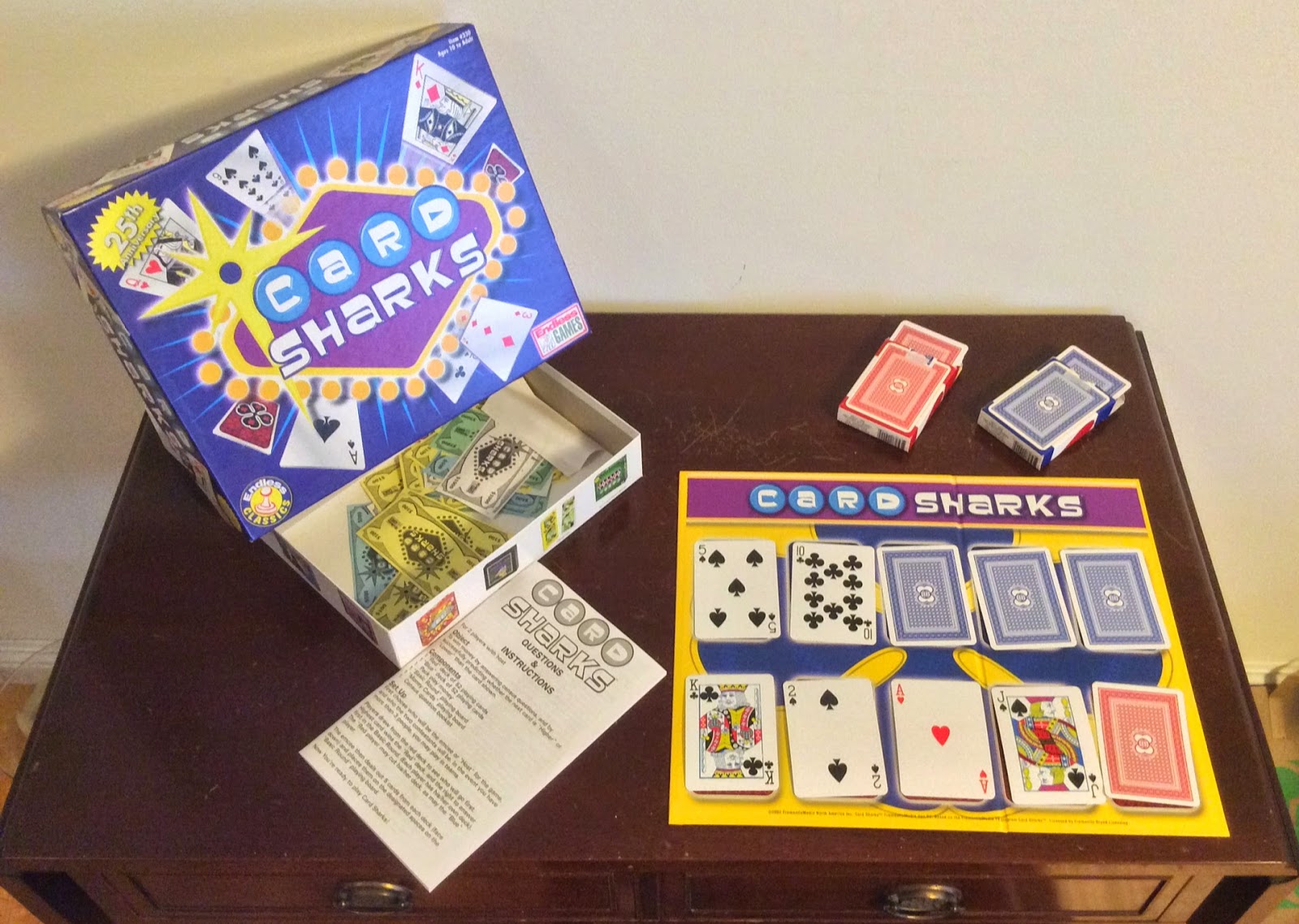 By the time this home version made it to store shelves, the most recent version, which lasted for one season in 2001, was already gone. Oddly enough, although this board game does indeed incorporate the logo and basic sense of style (or lack thereof?) from that version, the way the game is played bears pretty much no resemblance to the 2001 show, but instead incorporates elements from the previous (and much more successful) incarnations. This is classic Card Sharks.

Each player uses a separate deck of cards. Red for one player, and blue for the other. Control of the board is determined through a series of questions that ask how many of 100 people responded in a particular way to a survey. Quite frequently, these questions turn on moral decisions. For example, "We asked one hundred single women, 'Would you accept an engagement ring from the man you loved if you knew it once belonged to his ex-wife?' How many single women said they would accept the engagement ring anyway?"a Up to four of these questions are used in a round. For the first question, the player with the red deck must come up with a numerical answer to the question, while the blue deck player responds by answering that they think the true number will be higher or lower than that guess. If the blue player guesses correctly, he/she wins control of the board, but if the blue player guesses wrong (or the red player's number was exactly right), red player wins control of the board. The next question played will require the blue player to guess the number, with red responding "higher" or "lower." Questions alternate between players throughout the game.

The player in control now tries to complete their colored row of five cards by guessing whether the next card in a sequence is higher or lower than the card before it. Aces are high, and deuces (twos) are low. An error forces the player to go back to where he or she was at the beginning of that turn. If a card looks too hard to call, the player may "freeze," protecting his or her progress, but the player then needs to win control again to continue further. The round is won when a player correctly calls the last card in the five-card sequence, or upon the success or failure to complete a row on the last of four control questions (called "sudden death"). Winning two out of a possible three rounds wins the game. 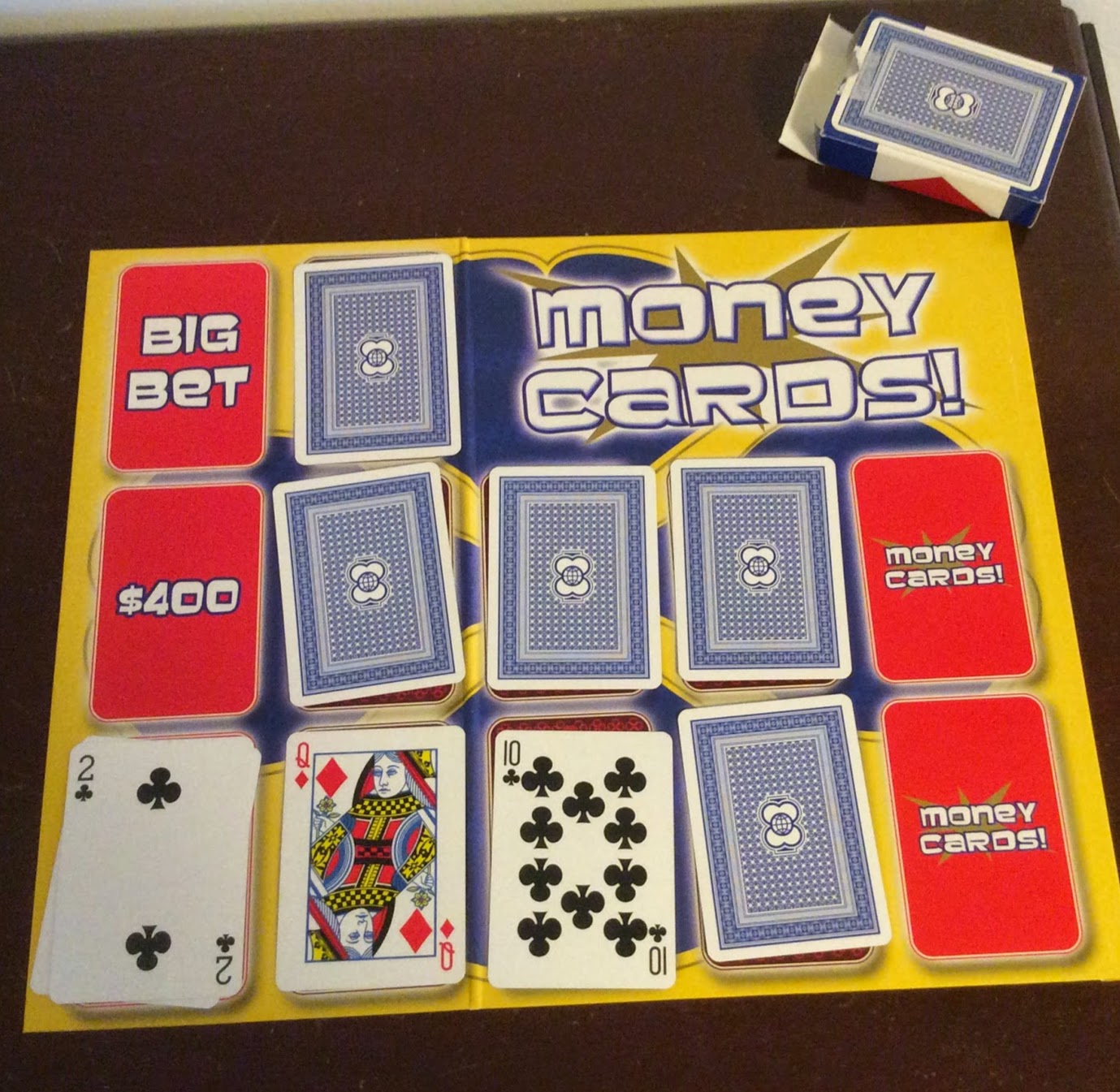 The winning player now gets to play the "Money Cards" bonus round, using the reverse side of the game board. The player starts with $200, and bids any or all of that amount on whether the next card is higher or lower, and continues in sequence for each card that comes afterward with whatever money is won or left over (adding $400 after the end of the first row, as that card moves to the next level). Finally, for the last card of the round, the player must make a "Big Bet" of at least half of their Money Card winnings.b

Like I said at the beginning, this is a game that I think could stand a fresh run on TV. The questions test how well a player understands human nature (I've often said that those of us studying to be, or working with, church leaders would do well to play this game), and the game has just enough of a mixture of strategy and luck to keep things interesting. Even players who've never seen the show before should be able to understand and enjoy it.

aOnly 14 women said that they would accept the ring anyway.
bAs with most game show board games, play money is provided. Each round is worth $500, and getting a survey question exactly right is also worth $500. Good luck spending that money, of course! The fact that the money is fake also makes the "Money Cards" purely academic. I'm sure a player on the actual show would think twice about risking, say, $5000, on whether the next card after an "8" was higher or lower, but in a board game, the only thing a player has to lose is her or her pride. Obviously, this reality changes the way people play, but there's really nothing that can be done about that unless you want to start giving your players money out of your own pocket as prizes.

Posted by Mark Baker-Wright at 12:00 PM No comments:

The Essence of the Character

One of the privileges of my current working situation is that I have an office all to myself, with shelves that I'm allowed to place personal items on. Thus, I have an array of Transformers (and other items, but lots of Transformers) sitting behind me as I work that often catches the eye of those who pass through.

Often, when someone sees the toys behind me, they make a reference to the toys of their own childhood, and can recognize some of the characters behind me readily. It is not unusual for someone to comment saying something like "I had that toy when I was a kid!" This always makes me smile, not simply because it's nice to have one's collection appreciated, but because I know that, with very few exceptions, none of the toys on my work shelves are actually toys from the 1980s, but are rather from much more recent times.

I consider this to be a testament to Hasbro's ability to capture the essence of a character when they do an update. For example, Starscream was specifically called out by name in a recent conversation. The Starscream I have on my shelf (seen toward the left on the image at the top of this blog entry) is from the "Classics" line of 2006. Since the person in my office was quite certainly already an adult by that time, I doubt this is what he had when he references his own childhood, but there really isn't any disputing that this toy is Starscream.

Hasbro has done their job well....
Posted by Mark Baker-Wright at 2:30 PM No comments: