The Green Hornet at 75

A superhero is celebrating his 75th anniversary today, but few will notice.

On January 31st, 1936, more than two years before Superman first appeared in comic books, and more than three years before Batman, the adventures of the Green Hornet were first broadcast over a Detroit radio station.  Perhaps to call the Green Hornet a "superhero" overstates the case.  After all, he has no superpowers, nor even the physical or mental prowess of Batman (although the Hornet's sidekick Kato is a brilliant martial artist).  In fact, the Green Hornet has more in common with the Lone Ranger (Britt Reid, the real name of the Hornet, was intentionally implied to be the Lone Ranger's decendant) than a superhero like Superman (Batman's arguably closer, with the exception of Batman's obvious connections to the Superman crowd). But if I said "pulp hero" or "vigilante" (as the Wikipedia article does, and those terms are unarguably more accurate), who would care?

Of course, there is the recently-released movie starring Seth Rogen, but from what I can tell, that's been in the works for years, and it's only a coincidence that it came out so close to the 75th anniversary of the Green Hornet's first appearance.  I haven't yet noticed any reference to the anniversary in the movie's publicity (including a campaign at Carl's Jr., which is where I was first made aware that the movie was coming), and the Wikipedia article for the movie doesn't mention the anniversary at all.

Once upon a time, the Green Hornet was extremely popular.  Besides the radio series which ran for over a decade, the Green Hornet was featured in multiple comic book series, a couple of movie serials (a bit more on that later), and even a mid-60's television series that featured a crossover with the Batman television series that was on the air at the same time (and on the same network).  But, to be perfectly honest, I learned of Bill Cosby's parody, the Brown Hornet, which featured on some of the later Fat Albert cartoons, first.  In fact, it was quite a few years before I realized that Cosby's Hornet was a parody of some specific existing franchise.

But even though the days of the Green Hornet's greatest popularity are clearly behind us, 75 years is nothing to sneeze at, so I've been working up to this event by watching the 1940 Green Hornet serial produced by Universal, which is in the Public Domain (although I'm not using that link myself, but rather watching via my Roku set using the "Pub-D-Hub" channel).  This was one of those kinds of deals where kids were supposed to go to the movie theater every week (hard for me to imagine going to a theater so often!) to see the next 20-minute installment.  I'm only about halfway through the series at the moment, and have to admit that I'm struggling.  The film quality is pretty bad, so that's probably part of it, but there's also not a lot of variation from one episode to the next.  That said, I have to say that "Flight of the Bumblebee" is absolutely perfect as superhero theme-music.  Here's how I would describe a generic episode of the serial:

The episode begins with a scrawl catching the audience up with recent events (it's well-established that the famous Star Wars opening scrawls were inspired by serials like this).  A group of racketeers is moving in on a business. Newspaper publisher Britt Reid investigates that business, and decides that something needs to be done as the Green Hornet.  The Hornet shows up to confront one of the racketeers, and a fight ensues.  Each episode ends with some catastrophe intended to make us wonder if the Hornet survives, which he invariably does (usually with the racketeer either dead or injured, and the episode moves to the next plot within the first minute or so).

I have little doubt that the current film (which I admit that I still haven't seen--again, I just don't go to theaters all that often) has more entertainment value than that, but I can't say that my interest has been piqued enough to go see it immediately.  I'll catch it on Netflix eventually.
Posted by Mark Baker-Wright at 12:00 AM No comments: 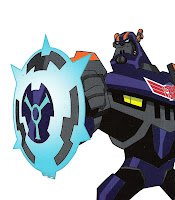 Last year, after it was confirmed that the theme for BotCon 2010 would be related to Generation Two, I did a short series of blog posts and tweets featuring Generation Two toys. Yesterday, they confirmed that BotCon 2011 would feature the Transformers: Animated line in some way. Now, exactly how Animated will be used is not yet entirely clear. While it is all but certain that molds from the Animated toyline will be used, which molds will be utilized, the exact characters to be featured, and what kind of story the convention comic will tell are all questions that will have to be answered in the coming weeks and months. Anyway, in honor of this year’s BotCon theme, I’ll show off some Animated toys that I’ve yet to feature here on the blog.

The name “Sentinel Prime” is one that has a long history within the Transformers franchise, often as the name of the Autobot leader who preceded Optimus Prime. So when it was discovered that Animated would feature a “Sentinel Prime” character (the first to ultimately be given an actual toy!), fans were understandably intrigued. However, the Animated character turned out to be something rather unexpected. For one thing, since Animated is somewhat unusual among Transformers franchises in that Optimus Prime is not the supreme leader of the Autobots (I’ll deal with the character who was in a future post), it would hardly have made sense to have Sentinel Prime be Optimus’ predecessor. So, in Animated, the writers determined that “Prime” was a rank given to Autobots. One could argue that “Prime” after an Autobot’s name is similar to “Captain” before a human being’s. Thus, Animated Sentinel Prime was characterized as equal to Optimus Prime in rank.

Not to hear Sentinel Prime tell it, of course. 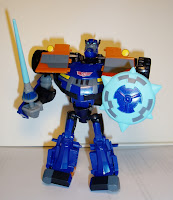 This version of Sentinel Prime considers himself the next supreme leader of the Autobots, and has an ego to match these ambitions. He’s certainly capable enough, but he isn’t exactly the most charismatic leader. Most of the time when he and Optimus Prime are together, he spends the bulk of his time dealing out insults to the peer he clearly feels is his inferior. 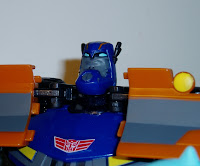 In the cartoon, Sentinel Prime was voiced by Townsend Coleman, who is perhaps better known for being the voice of The Tick. Once the casting decision was made, the designers decided to take advantage of Coleman’s “Tick” notoriety by designing Sentinel Prime with “Tick-like” attributes. Compare Sentinel Prime’s face here with this picture of the Tick, for example. Evildoers, you face Sentinel Prime!
Posted by Mark Baker-Wright at 12:00 AM No comments: 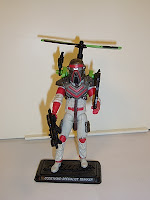 I have a small number of GI Joe figures in my collection.  I'm really not much for military-stuff, but there's always been something about the "Real American Hero" that I still remember fondly from my childhood.  Perhaps it's the way that the GI Joe and Transformers franchises (both properties of Hasbro) were apparently tied to each other way back then.

In 2008, Hasbro released a GI Joe figure that was a crossover with another 80's toy line.  Specialist Trakker is an homage to Matt Trakker, the leader of the good guys in the M.A.S.K. line.  M.A.S.K. was a series of figures released by one-time Hasbro competitor Kenner.  The Wikipedia article for M.A.S.K. describes the line as "a hybrid of... G.I. Joe and The Transformers," and this seems an accurate enough description.  M.A.S.K. featured action figures that drove vehicles that converted from one form (a "regular" vehicle mode or similarly nondescript disguise) to another (usually with additional flight or offensive capabilities).  Each figure would wear a "mask" that was supposed to grant the wearer special powers.  One person's mask would fire energy blasts, while another would cast illusions, while another would allow the wearer to leap great distances, and so on.

Kenner was absorbed by Hasbro in the early 90's, making the M.A.S.K. characters Hasbro property.  Although there has been no indication that Hasbro intends to release any wide-scale M.A.S.K. revival, the addition of Specialist Trakker definitely demonstrates that the line has not been forgotten. 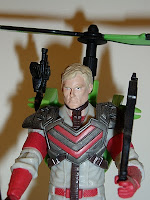 The original Matt Trakker figure (seen here without his mask on, and here with two versions of his mask) was not only made more than 20 years ago, but was a bit smaller than the average GI Joe figure, so it's really no surprise that the GI Joe version was a bit larger and more detailed.  What's perhaps more surprising is that, other than the head and arms, this new Trakker figure is actually repaint of a previously released GI Joe figure.  Just add the right colors, and it's a very effective homage.  The green backpack even evokes thoughts of one of the original M.A.S.K. vehicles, if only in color and generic purpose (it doesn't actually convert from one form to another, sadly).
Posted by Mark Baker-Wright at 12:00 AM 2 comments:

A friend of mine (who herself blogs over at What Is, and What Could Be) shared this video she found a couple of weeks ago, and I've found it to be pretty cute, clever, and addictive.  Disclaimer: I make no guarantee of romance for anyone who takes these lyrics seriously!

If you like the song, you can find it at iTunes. Search for "(She might love you if you learn to) Play Guitar" by Bella Hemming.
Posted by Mark Baker-Wright at 7:15 AM No comments: