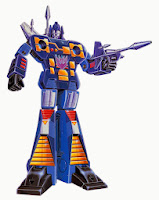 Long before "Cliffjumper's Identity Crisis," Frenzy was often the victim of mistaken identity.

As I described when discussing Frenzy's brother Rumble, the toy colors for the two were swapped on the cartoon, leading to endless "Frenzy is Red, Rumble is Blue/Frenzy is Blue, Rumble is Red" debates. But the confusion doesn't end there.

Frenzy's identity was so thoroughly subsumed under Rumble's in the cartoon that Frenzy also picked up Rumble's characteristic earthquake-making pile drivers, rendering him little more than a Rumble-clone. To make matters worse, Frenzy even used the same voice actor as Rumble (the legendary Frank Welker).

This was, to put it bluntly, not the original intention. So if the only Frenzy you've ever known was from those appearances in the cartoon, the character I'm about to describe will be entirely new to you.... 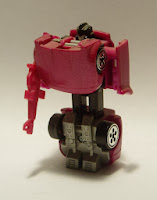 Unlike his brother Rumble, Frenzy's powers are much more explicitly sound-based. He attacks via high-pitch sound waves designed to disrupt circuits in robots, and (although not explicitly stated in his original Tech Specs) which are often depicted as causing balance issues in humans. Frenzy is also a bit mentally unbalanced. While Rumble is certainly aggressive and hot-tempered, Frenzy is positively devoted to causing chaos. He has no particular attachment to being a Decepticon. If being an Autobot somehow enabled Frenzy to destroy more of the universe around him, he'd probably sign up over there instead. It's all about what team allows him to feed his lust for war. This devotion to creating havoc is also Frenzy's primary weakness. He doesn't think any of his attacks through. He's a blunt instrument that just wrecks everything in his path. An opponent who has a cool enough head to think things through can usually figure out a way to stop Frenzy fairly easily.

There was one, brief, time in Frenzy's history where there was little danger of his being confused with Rumble, and I've decided to devote the actual toy images of this entry to that fleeting moment. Toward the end of the Generation Two toyline (so close to the end, in fact, that the toys actually didn't have the "Generation Two" labeling anymore), Frenzy was released as a redeco of one of the Hot Wheels-like "Go-Bots." Being the only former cassette-bot to receive such treatment (a Rumble Go-Bot toy was designed from a different mold, but was never released), Frenzy was finally his own 'bot. Unfortunately, no official fiction related to this form has ever been released,* leaving this short period of Frenzy's uniqueness to be little more than a quirk of history. For those interested, I did do a bit of speculative fan-fiction about this version of Frenzy some time back. You can find that here.
*Some recent club fiction repurposes this toy to be a clone of the original Frenzy, but since that's not the same character, I don't count it.
Posted by Mark Baker-Wright at 9:00 AM No comments: 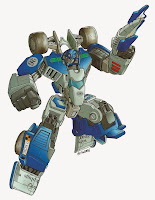 Among the rest of the Autobot crew, Mirage doesn't quite fit in. He's a perfectly capable soldier, and even better at espionage, but he's pretty much literally in a different class than those he's found himself hanging around with. It's a little bit like if Lord Grantham found himself fighting a war alongside Thomas Barrow, perhaps with John Bates as his commanding officer.

Part of where that analogy breaks down, of course, is that Lord Grantham is unquestionably devoted to the British cause in wartime (and, indeed, even laments not being allowed to fight), while Mirage is a little less dedicated to the Autobots. Indeed, many of his companions have accused him of sympathizing with the Decepticons! While that accusation perhaps overstates the point, it is nonetheless true that it is probably unwise to trust Mirage too readily. Unlike other characters, the issue is less that Mirage is a pacifist at heart, and more simply that he thinks that fighting a war is beneath him. Obviously, such a attitude does little to endear Mirage to his colleagues.

Mirage is perhaps best-known for the abilities for which he is named, although these oddly differ according to continuity. The cartoon gave him the ability to become invisible, which is undeniably a useful skill for a spy to have. His tech specs, on the other hand, suggest that he can change his appearance or cast illusions for a period of time, which also has obvious uses, and indeed is probably even more in keeping with the name. Of course, this is another case where the cartoon's ubiquity has supplanted the other versions in most people's imaginations.
Posted by Mark Baker-Wright at 9:00 AM No comments: 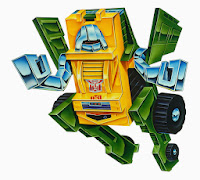 I half-suspect that a certain controversial pastor in Seattle would like Brawn. Brawn may be small, but there's no disputing that he's a tough guy, and if you want to question it, Brawn will be happy to prove his point by punching you in the face (especially if you're a Decepticon). No other Autobot plays up the "macho" image more. 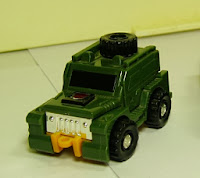 It's not that he isn't actually strong. He's second only to Optimus Prime in this department among the original line of Autobot characters. Rather, it's that he seems to have such a deep need to prove how strong he is. Rather than just going up to a wall that needs demolishing and knocking it down, Brawn will first tell you how badly he's going to tear down the wall, and how pathetic the wall is compared to his ability to destroy it. Compare this behavior to, say, Omega Supreme (a character from the following year, and indisputably stronger than Brawn), who probably wouldn't bother saying anything, and if he did, his response would probably be two or three words at most.

But, despite this personality flaw, Brawn remains a good guy at heart. He doesn't just punch people out unprovoked, and usually uses his demolition skills to help his friends and fellow soldiers. He just has a bit of a temper, and may take a minute to remember who's side you're on if you just called him a wimp. So if you like your face in the arrangement it's already in, take my advice:

Don't call him a wimp.
Posted by Mark Baker-Wright at 9:00 AM No comments:

One of the new shows on the CW television network this year is The Tomorrow People. Long-time readers (and sci-fi fans) may already know that the show is a remake of a show from the 1970s in the UK. For those who aren't familiar with the show, it centers around a group of people who represent the next stage in human evolution, possessing special abilities. Perhaps most prominent among these powers is the ability to teleport instantly from one location to another. Skywarp is perhaps best known for having this ability. But whereas the "Tomorrow People" use their powers to help each other, Skywarp is just a jerk.

Since Skywarp is a Decepticon, that may perhaps seem like it's stating the obvious, but it bears emphasizing. Other Decepticons may crave power, but Skywarp just likes playing mean tricks on others (including others on his own side!). A popular meme among fans over the past few years involves Skywarp pushing unsuspecting people down stairs. To the best of my knowledge, this has yet to happen in any official story, but it's still well in keeping with the established personality of the character. 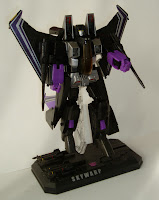 Perhaps it's a good thing, then, not only that Skywarp is the only one of the Decepticons (at least, within the Generation One continuity) who can teleport, but also that he's so incredibly stupid. So stupid, in fact, that he's completely dependent on having someone in charge tell him what to do if he's to be of any value whatsoever to the Decepticon cause.

Of course, that's probably small comfort to the hapless victim who finds himself suddenly pushed down a flight of stairs by someone who wasn't even behind him the second previously....
Posted by Mark Baker-Wright at 9:00 AM No comments: