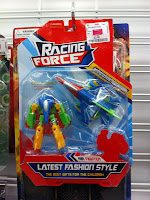 One of the things I like to do when I have some spare time is drive to various parts of Southern California and check out the discount shops and thrift stores. Every now and then, I see some rather interesting Transformer-related items on the shelves. Neither of these toys I'm sharing today are technically Transformers, of course, but I figure they're still relevant....

The first oddity I thought worth writing about is this "Racing Force" set of two out-and-out knock-offs of Generation Two-era jets in packaging clearly meant to emulate the Transformers: Animated logo. I'm not entirely sure how those colors can be said to be the "latest fashion style" with a straight face, but there you go. 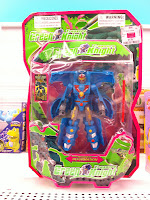 The other item is this transforming robot. When I realized what it was, I was reminded of an item that people had wished was real back when the 2007 live-action Transformers movie had first come out. In an important scene from that movie, an artifact from Cybertron called the "Allspark," which had fallen to Earth ages ago, was used to grant life to a number of regular mechanical objects. One of the items to be granted life in this manner was a Mountain Dew vending machine, and fans were known to be clamoring for an actual transforming toy of it for months afterward. While this little hunk of plastic doesn't turn into a soda vending machine, it does transform into a soda can (and, if the name on the package is any indication, a green one, although the robot sure looks blue to me)! I make no promises of liquid refreshment inside, and if there is any such liquid to be had, I really don't recommend drinking it!

But then, I only ever drink the real excessively-caffeinated Mountain Dew when I'm pulling an all-night paper-writing session (something I haven't had occasion to do for years now), so what do I know?
Posted by Mark Baker-Wright at 9:00 AM No comments:

The Legend of Blue Bluestreak 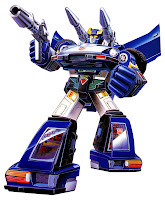 There is perhaps no Transformers myth more legendary than the purported existence of "blue Bluestreak." Basically, what seems to have happened is that, somewhere along the process of taking toys from the old Diaclone line and repurposing them for the Transformers line in 1984, a Datsun Fairlady Z toy was sold in a grey-and-red coloration and given the name "Bluestreak," even though the original toy catalog, the instruction booklet, and even the package art on the front of the box itself, all used a blue coloration, a common color variation (among several) of the original Diaclone toy. Although many long-standing Transformers fans claim to remember seeing a "blue Bluestreak" in Transformers packaging back when they were kids, no evidence has ever surfaced to indicate that "blue Bluestreak" was ever officially released as a Transformer.

Perhaps even more odd is the fact that this remains true, even to this day, despite a myriad of special Diaclone-based color schemes having been used for various other reissues over the years, especially as e-HOBBY exclusives. Nor does any other official Transformers merchandise depicting this character in this form — only blue — seem to exist.

With one possible exception....

One of the more unusual bits of merchandise released back in the 1980's was this 3-D Puzzle set featuring, you guessed it, a "blue Bluestreak." Basically, the idea was that you could assemble the pieces to form Bluestreak in robot mode, then take the puzzle back apart and reassemble the pieces in vehicle mode. 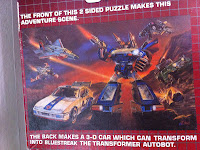 When I found this box for sale at an antique shop recently, I was surprised to learn that there was yet another way to assemble the pieces, such that you could get a traditional flat puzzle with this piece of Transformers art on it. This scene is certainly compatible with other Transformers art of this era, such as that found of the back of the toy packaging, but I can't say I recall seeing this particular work before.

I didn't pick this box up when I was at the antique shop, but I was sorely tempted, especially for that art! I may find myself heading back there on my way south for BotCon next week!
Posted by Mark Baker-Wright at 9:00 AM No comments: 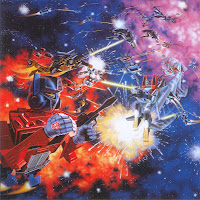 Perhaps one of the most iconic images to come out of the original era of Transformers, the image you see here graced the back of the packaging for most of the first year's worth of Transformers toys back in 1984. I still get a nostalgic twinge whenever I see it.

Apparently, this art was created by an artist named David Schleinkofer, and the alt.toys.transformers mainstay who currently goes by the name "Steve L.K. Macrocranios" (although long-time readers may remember a guy I referred to as "Crazy Steve." It's the same guy) has been in contact with him. Steve reports that he's working on an e-mail interview with Schleinkofer. Although I sadly missed Steve's deadline for sending questions over the weekend, you can still go to this link to see the discussion on alt.toys.transformers, and can see more of Schleinkofer's work at his flickr account, where Steve says you can send your own questions anytime!