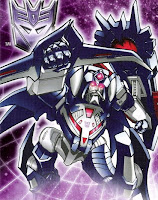 Of the five figures in the "Wings of Honor" box set, Scourge is the lone Decepticon. Yet, he doesn't interact with any of the other characters represented by the other toys at all (at least, not at the ages they were at when they looked like the toy we're being given) in the comic that comes with the set. Instead, Scourge is featured in a "framing story" that gives old-guy Kup a reason to remember his time as a young 'un. I find this to be more than a little strange.

Don't get me wrong, I'm actually a fan of the toy, which is a repaint of Cybertron Sideways. Although I know that not everyone agrees with me on this point, I actually think that the vehicle mode captures the essence of Scourge quite nicely. Granted, it's not a "flying soapdish" (as some have described the original Scourge's alternate mode), but if one accepts the idea that Scourge is somewhat of a vampire (he was created from the remains of dead Decepticons, after all. I confess that I'm not the first one to come across the "vampire" analogy), and one then remembers that this toy was also used for the recent Ratbat release, it all comes together. 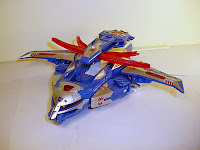 All BotCon exclusives are repaints, and with the recent line of movie-related toys off-limits due to licensing issues, and the Animated line simply too recent to be viable for the long planning BotCon requires, and nearly all of the "Classics" molds used in previous conventions, Fun Publications had to use either Energon or Cybertron molds for pretty much every figure released at BotCon 2009. So, yet again, I have to mention that this mold comes with a "Cyber Key." Rather than causing a weapon to flip out, Scourge's "Cyber Key" causes an array of blades to pop out of Scourge's arm shield (the top of Scourge's vehicle mode, as seen here). Sadly, the faction changing gimmick created for Sideways (and used to nice effect on Ratbat) is eliminated entirely here. But there really wouldn't have been an appropriate way to use it, anyway.

In robot mode, we see that Scourge was given a remolded head appropriate to the character. It's a little small for Scourge's body, but it does capture the essence of the character quite nicely.

I wish that Scourge's character was featured more fully in the "Wings of Honor" comic. Not only does Scourge not feature in the flashback (which is appropriate, since Scourge is generally established as having been created by Unicron in the year 2005), he doesn't really do anything significant in the framing story besides having a weapon blow up in his face. Really, they could have given that job to anyone! Still, it gets us a pretty nice toy. 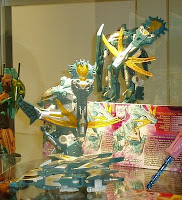 Actually, it got us several nice toys, at least for those lucky enough to pick up the Sweeps 3-pack. I was allowed to purchase a set when I went through the Thursday night line, but that set was already promised to someone else, and they sold out before I could get to the club store after limits were lifted on Saturday morning, so you'll just have to make do with this picture taken at the convention. The Sweeps use the exact same mold as Scourge, but unlike the original Generation One Sweeps, which were identical in all respects (save, perhaps, sentience) these Sweeps are given a lighter blue color scheme, with transparent yellow plastic where Scourge had red. It really works quite nicely. These are the hardest-to-find figures of BotCon 2009, at only 1000 sets, and eBay auctions have them selling at a fairly high price. If you're able to find one (assuming you find a seller who's actually selling them singly, rather than bundled as a 3-pack, which is surprisingly uncommon) for a decent price, I recommend grabbing it.
Posted by Mark Baker-Wright at 12:00 AM