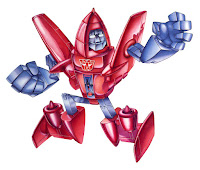 When the Transformers line was being first planned out in the early 1980s, and the decision was made to feature two factions of characters in a battle of good vs. evil, attention was given to choosing alternative modes that made it possible to quickly determine one faction from the other, even if one didn't actually know who the character was or couldn't find the character's faction symbol. Thus, the early Autobots were all ground-based vehicles (cars and trucks), while the early Decepticons were weapons, communications devices, or aerial vehicles. It didn't take long for these lines to blur, and by just the second year of the franchise, we already get our first airplane Autobot: Powerglide.