I've collected Transformers for pretty much as long as there have been Transformers, and now have a collection of literally hundreds of toys. Folks who don't have collections probably think that's a little odd, but if you're a collector, this is actually fairly nominal. I know of several Transformers collectors, in particular, who actually have well over a thousand toys. I try to balance the needs of financial responsibility and fun a bit, and this is what works for me. 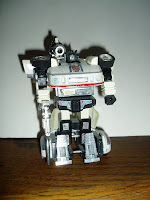 One of the first Transformers I ever got (that I still have, anyway) is also one of the more uncommon. It was obtained via an offer where you sent in several UPC symbols from Cookie Crisp cereal, along with $3, to get a toy of the Autobot, Jazz. At the time, I had no idea that "Cookie Crisp Jazz" was any different than "regular Jazz," but since I ate cereal anyway, $3 was more reasonable for me to spend than the $10 or so the regular toy cost in the stores, so that's how I got Jazz. Sadly, my Jazz is no longer quite complete: it's missing the missile that goes in the launcher on Jazz's shoulder. I also no longer have the little slip of paper with a black-and-white version of Jazz's box art and bio information (taken straight from the toy's Tech Specs that were generally found on the back of the box, but without the numerical statistics). And you can tell that some of the white plastic has yellowed a bit in the past 20+ years and that the stickers have faded. Ahhh, well. If only I could tell my younger self to take better care of my toys... (actually, in regard to the yellowing, it probably wouldn't have made much difference. To stop yellowing, you pretty much have to put toys in dark places and never look at them!). 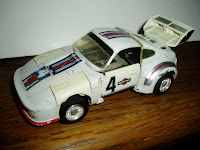 I only learned that "Cookie Crisp Jazz" was considered a "variant" of regular Jazz in fairly recent times via the Transformers fan community on the internet. This site, no longer actively maintained, is dedicated to cataloging the variations in pretty much every Transformer made up until the time that the webmaster of the site decided he had other things to devote his attention to. On the site, you can see several pictures detailing what differences were made for the cereal promotion. Basically, the sponsor labels were removed from several areas, notably the windshield, the spoiler, the headlights, and the doors... well, at least that's what the variations site says. If you'll notice the pictures here, my Jazz indeed does lack the sponsor labels on the windshield, the spoiler, and the headlights. But my Jazz's doors still have the "Martinii" logos on them! I've never figured out what's up with that. Is my specimen unusual among "Cookie Crisp Jazzes"? There aren't enough of these around (certainly not cheaply enough today that I'd spend the money buying one), and even fewer that could be verified as having come specifically from the Cookie Crisp offer (I can't exactly document mine anymore!) that I've been able to find out.
Posted by Mark Baker-Wright at 8:45 AM 5 comments:

Theft of the Golden Disk video

Created by members of the official Transformers Collectors' Club, this 2-part video features several of the characters from the BotCon 2006 exclusive set (not to mention the dragon character you see in the picture here in a pre-Beast form!). They even got original Beast Wars Megatron voice actor David Kaye to reprise his role for this fan video!

Posted by Mark Baker-Wright at 8:30 AM No comments:

In Honor of the Wreckers Members of the Official Transformers Club had a long-term dream realized about a month ago when the story of "The Wreckers" (started by the previous incarnation of the club when they were still handling the official convention) was finally completed. The story is only available to members via the club site, so I can't link to that from here, but I can give a bit of context through links that are publicly available.
In honor of this achievement, I got out all the Transformers I have that played a part in the Wreckers storyline for an "action shot." Of course, nothing like this scene ever shows up in the story, and this particular assortment of characters was never together in the same place at any one time.
Posted by Mark Baker-Wright at 7:30 AM No comments:

The Christmas season was a time of a few surprises. Some of them good, some not so good. Among the good surprises: my folks really outdid themselves on their Christmas gifts this year. My wife and I have been enjoying watching Season 3 of Boston Legal, I've plugged in my TARDIS USB hub, and I'm having fun learning all the ins-and-outs of the iPod Nano (Michelle's already had an iPod for some time).

Among the not-so-good surprises, I learned that Big Finish was unable to renew their license with Fremantle Media to produce Tomorrow People audio stories. For the uninformed, The Tomorrow People was a children's series produced in the UK back in the '70s, which has seen revival in a couple of forms since then, of which the Big Finish audios were the most recent. The loss of the license means that the (rather intense) cliffhanger set up this past April will never be resolved. (Moving aside to rant for a minute, I really hate it when writers set up cliffhangers before they have a lock on the story even continuing at all. This is nothing new, and has happened quite a lot over the years, but there's really no excuse. All the writers have to do is give their stories closure, unless they know that the show's coming back. The response I got from Big Finish — "we had no reason to believe that we would not be able to release the sixth season" — really doesn't cut it, since they had to know that the license was still up for renewal. I've had to suffer through this for the 90's revival of Dark Shadows, pretty much all of the Dreamwave Transformers line of comics, and even Team Knight Rider! Yeah, that last one deserved to be canceled. The writers could still have given it an actual ending!)

OK. Rant over. While I was searching through the web for a live forum to discuss this state of affairs with other Tomorrow People fans (all I found was an e-mail list, which seems to be defunct. At least, I haven't gotten anything since signing up last week), I stumbled upon a Tomorrow People wiki. While reading the "purpose" page, I realized that this was actually a wiki that I had asked to have created, and that I was actually credited as the wiki's creator! I had done this back in September, but never got a response that my request had been granted (the e-mail was probably caught by my spam filter), and so I had forgotten about it until "rediscovering" it through my search.

Apparently, no one else had discovered the wiki either, as it was still almost entirely empty when I found it. So I have a request for anyone out there who might be a Tomorrow People fan: please check out the wiki, which I've called "The Jaunting Pad." If you're not a fan yourself, but know someone who is, please send them the link. I've set up a basic structure to the site and a few sample entries to give people an idea of the format I'm shooting for. There's a lot of information that needs to be filled in, and I can't possibly do it myself. Frankly, I'm surprised that this hasn't been attempted by any of a few much more dedicated and informed TP fans I know are out there (and I did do a search to see what else I could find). Hopefully, together we can build up this resource, and the show will continue to live beyond the confines of licenses and broadcast requirements.
Posted by Mark Baker-Wright at 8:00 AM 2 comments: