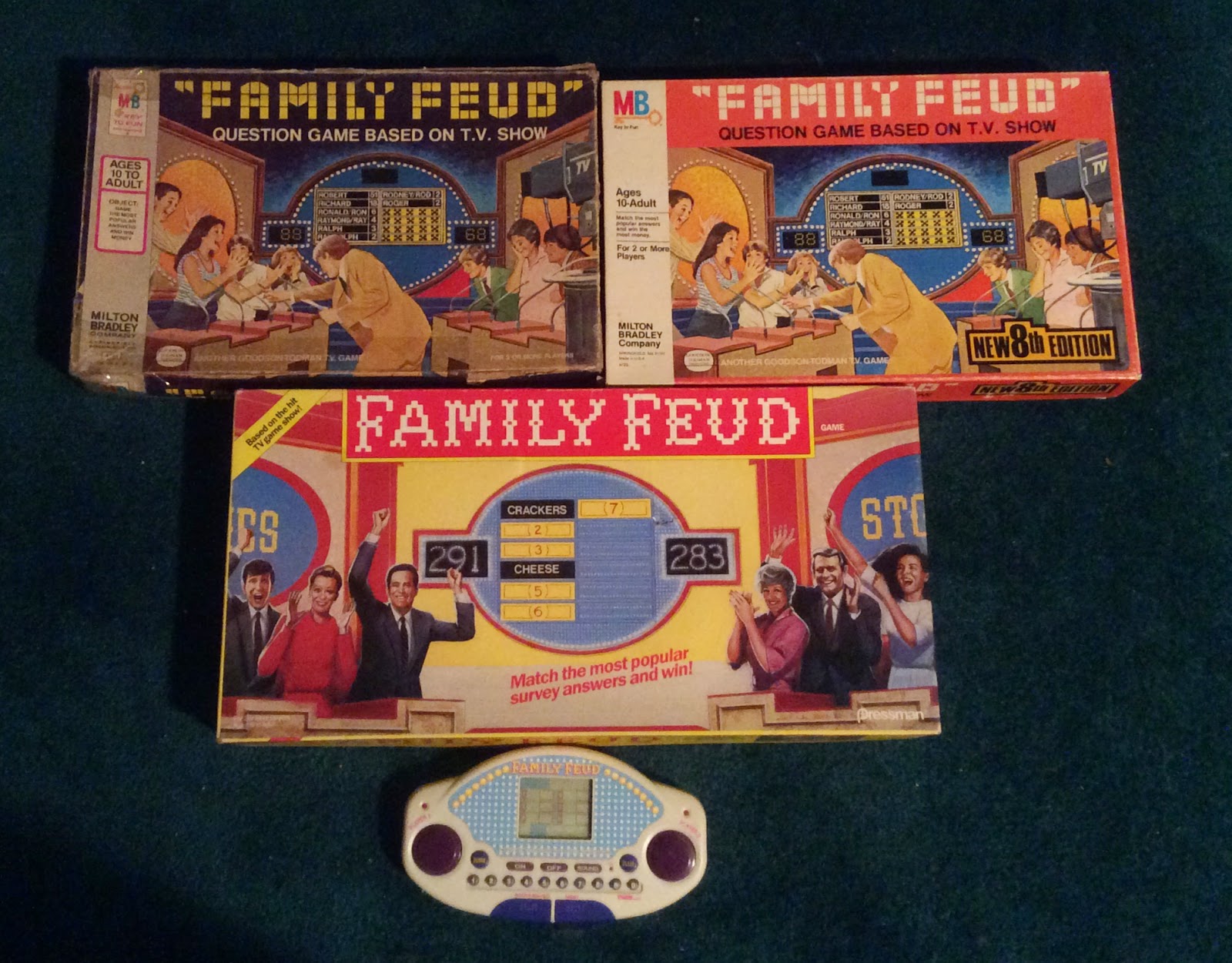 With Thanksgiving around the corner, it seems appropriate to pull out a game that has been something of a family tradition for quite some time. In fact, this is arguably the start of my game show board game collection right here.

I've mentioned before about how my grandma was a five-time undefeated champion on a game show called Split Second back in the 1970s. The fact is, that whole side of my family enjoys games, and with quite a few Aunts and Uncles (to say nothing of cousins!), there are usually plenty of willing players to be found. Anyway, some time ago (I no longer remember exactly when) Grandma found a board game version of Family Feud at a yard sale and thought of me. She had it ready for one of my then-annual trips up to Placerville for Thanksgiving, and we played several games over the weekend before I brought the game home. Since then, most times when I head up north, I try to bring a game along. While Family Feud is by no means the only game I'll bring, it remains a favorite, perhaps demonstrated by the multiple versions of the board game I now have in my possession (most of which were also provided by my grandma, although I note that all of them, including that electronic version I only use these days as a buzzer, predate the current 15 years-and-running version of the show). 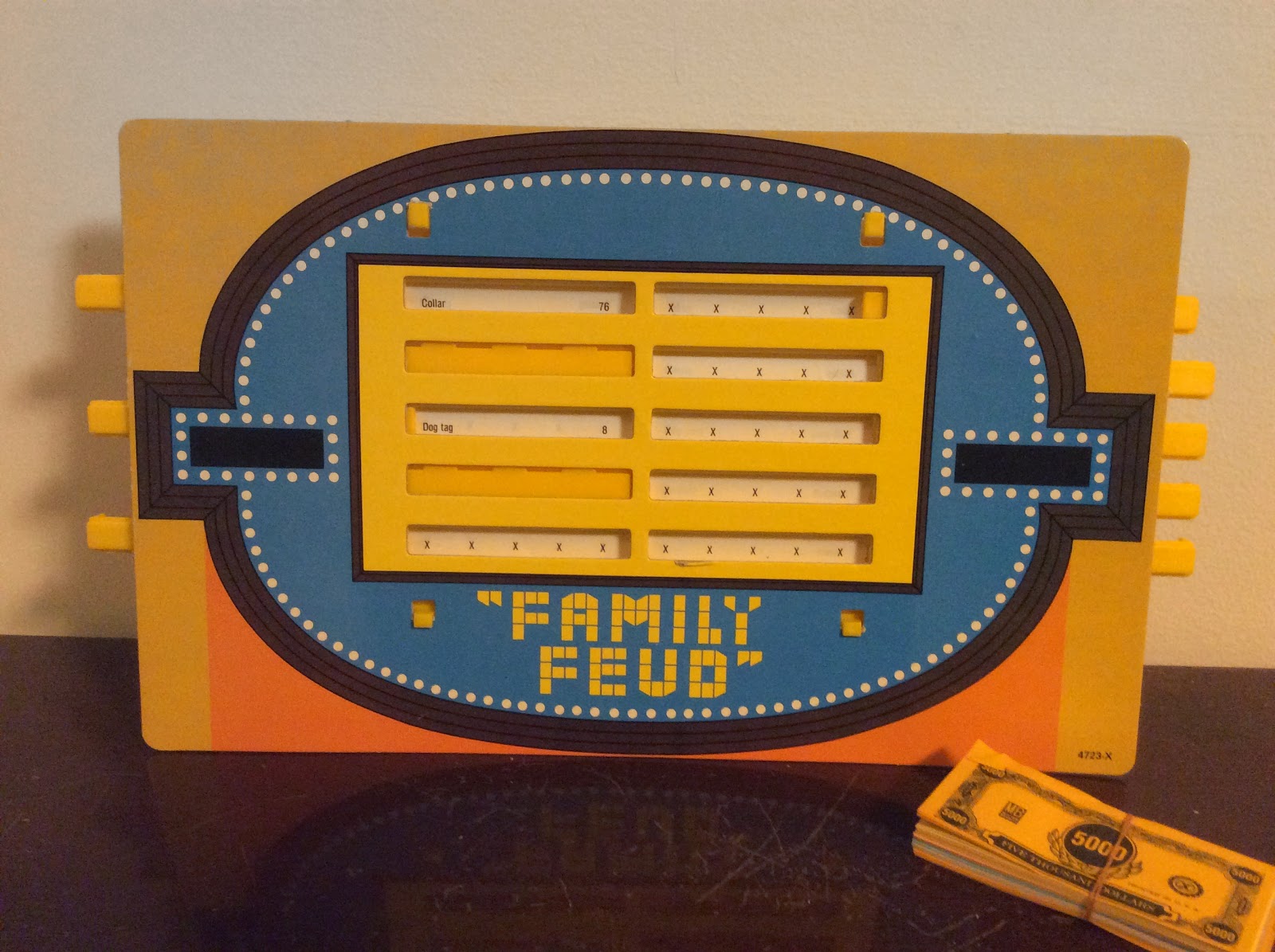 For those unfamiliar with the game (and if that's you, thank you for bearing with me on a post that you must have no interest in whatsoever, since anyone who follows game shows probably knows Family Feud pretty well!), the object is to guess the most popular answers to survey questions posed to 100 people. For example, in the example in this picture (go ahead and click for a larger version... and zoom in if you need to), the question was "Name something that a dog wears." Points are scored according to how many of the 100 people surveyed gave a particular answer (with the highest-ranked answers showing up at the upper-left of the survey, and working downward through the four answers — in this instance — that got more than a single response). 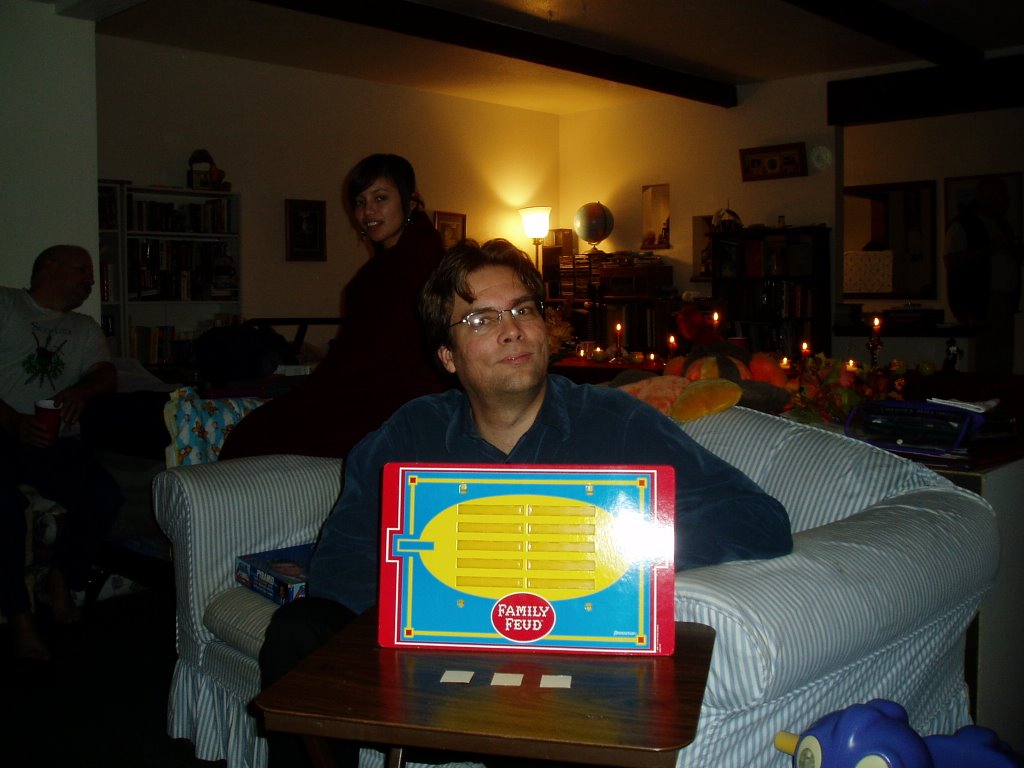 Allowing for the lack of electronic precision provided by the buzzers and timers of the actual show (although these may, of course, be provided by other means with the proper resources... like that otherwise terrible electronic version of the game from 1998), the board games duplicate the play of the show almost perfectly, and Family Feud is arguably my favorite board game to "host" at a party. My only real difficulty these days is a side effect of the fact that these editions all came out 20 years or more ago. Imagine asking someone today to "Name a famous person named 'Bill'," when all of the answers on the survey were originally given in the 1980s! Bill Clinton's not going to be there, even though it might well have been a contender for the number one slot today.

Rather than disadvantage my cousins (some of whom weren't even born yet when these editions came out!), I usually end up throwing such questions out. It's a regrettable limitation, but an unavoidable one. This is still one of my favorite games to play with family and friends.
Posted by Mark Baker-Wright at 9:00 AM No comments: 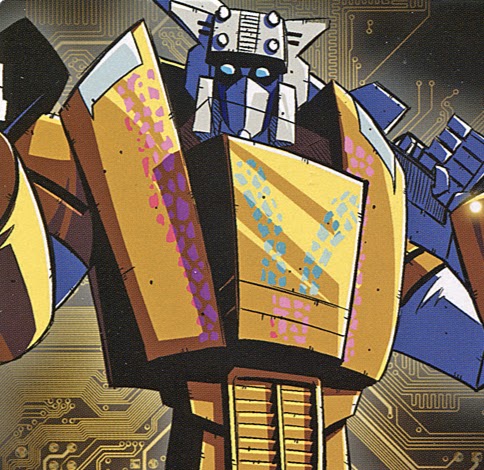 From practically the moment that Hoist, one of the exclusives from the BotCon 2013 box set, was revealed, fans guessed that one of the at-convention souvenirs would be Electro, a character previously used only once, as one of the "Laser Rod" figures from Generation Two. The newly created head advertised for Hoist had a couple of features that weren't really native to the Machine Wars version of Hoist the toy was claiming to represent, but were perfect for Electro, and since new head molds are known to be expensive, we've come to expect them to be used more than once. Far from being a source of complaint, however, this was especially welcome news for many fans, as most anyone who once owned an Electro figure does so no longer, and this represented a second chance. 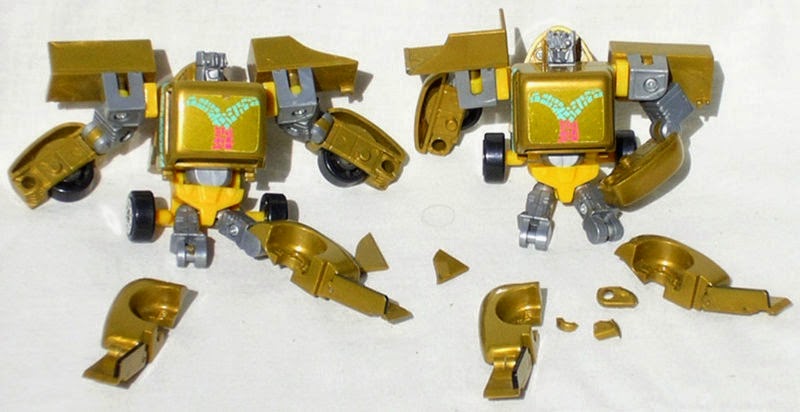 But why should such a second chance be so universally necessary? Generation Two Electro is perhaps one of the most notorious known examples of what has been called "Gold Plastic Syndrome," a phenomenon that afflicts toys with... well, you guessed it, gold plastic. Such toys tend to become extremely fragile with age, and thus a figure that hasn't been broken yet... well, it's really only a matter of time before your figure looks like these examples shown on the TFWiki.

I've been fortunate up to this point not to have any of my toys yet fall victim to this malady, although I do have two toys now known to be plagued by GPS (as Gold Plastic Syndrome is usually shorthanded): the Millennium Falcon Crossovers toy, and Micromaster Superion. I wasn't aware that either toy would be GPS-sufferers at the time that I got them. Indeed, fans had been assured at that point that Hasbro had fixed the problem, and that new toys with gold plastic would no longer suffer from the situation. This is now known not to be the case, at least for those toys (each about 8 years old at this point). Thus, I haven't really done anything with them for years, and they now sit on my shelf in fear of the day when they, too, will become a bunch of irreparable shards. 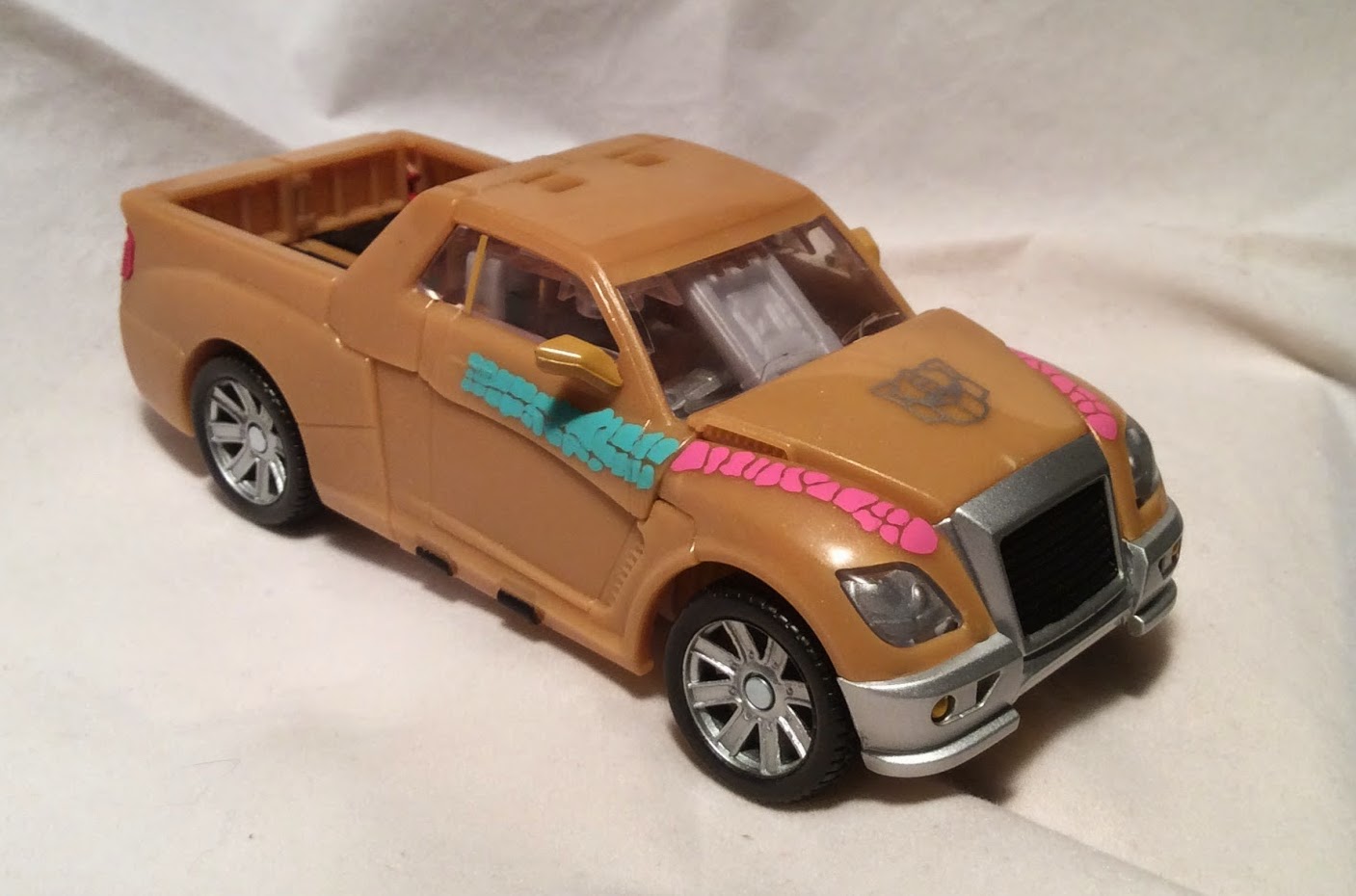 But, back to BotCon Electro (technically, it's "Autobot Electrons" for trademark purposes, but everyone knows who it's supposed to be). Is this toy, being also made out of gold-colored plastic, also doomed? I cannot definitively rule that possibility out, but the plastic does not appear to be quite the same type as Electro's doomed predecessor. For the time being, at least, I haven't heard of any specimens to demonstrate GPS. 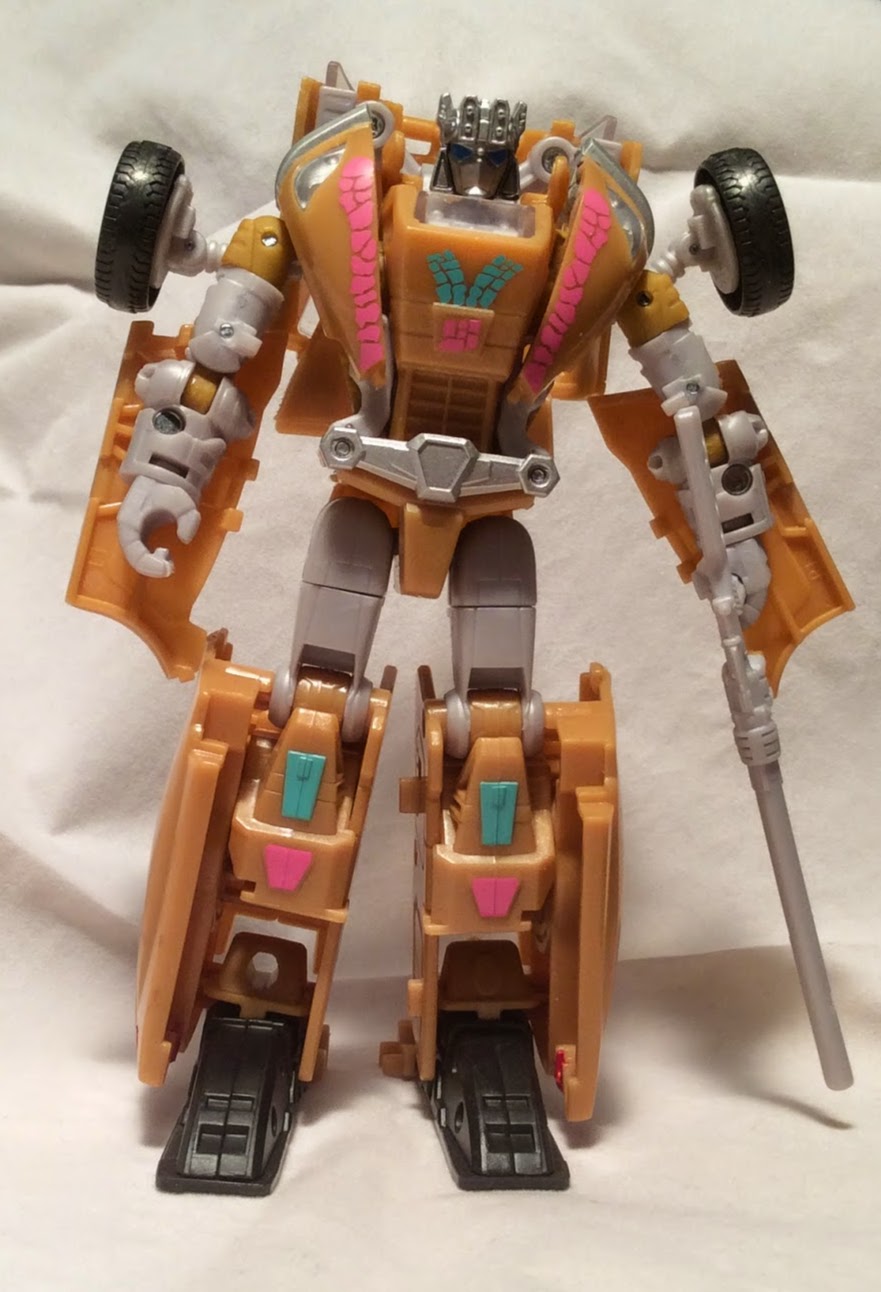 That's not to say the toy came to BotCon 2013 without problems. Both Electro and Hoist suffered an assembly problem that meant that the chest would not fold down properly, requiring minor disassembly to reorient a part that had been put in wrong at the factory. Although the thought of taking one's expensive convention exclusive toys apart scares some fans to death, it really is a pretty simple fix. Here are instructions (via TFW2005). Thankfully, Electro didn't have the shoulder misassembly that Hoist had. That problem is much harder to fix!

Long-time readers will already know that I try to avoid unnecessary modifiers to character names whenever I can. If I do a feature on Mirage, for example, without pointing out that it's, say, Machine Wars Mirage, you can be fairly confident that I'm referencing the most iconic version of a character (which usually means the original version from the 1980s, now sometimes referred to as "Generation One"). However, because several names have been reused over the 30-year history of the franchise, modifiers are often necessary. In some cases, such as Heatwave, the lack of a truly "iconic" version creates a somewhat awkward situation. 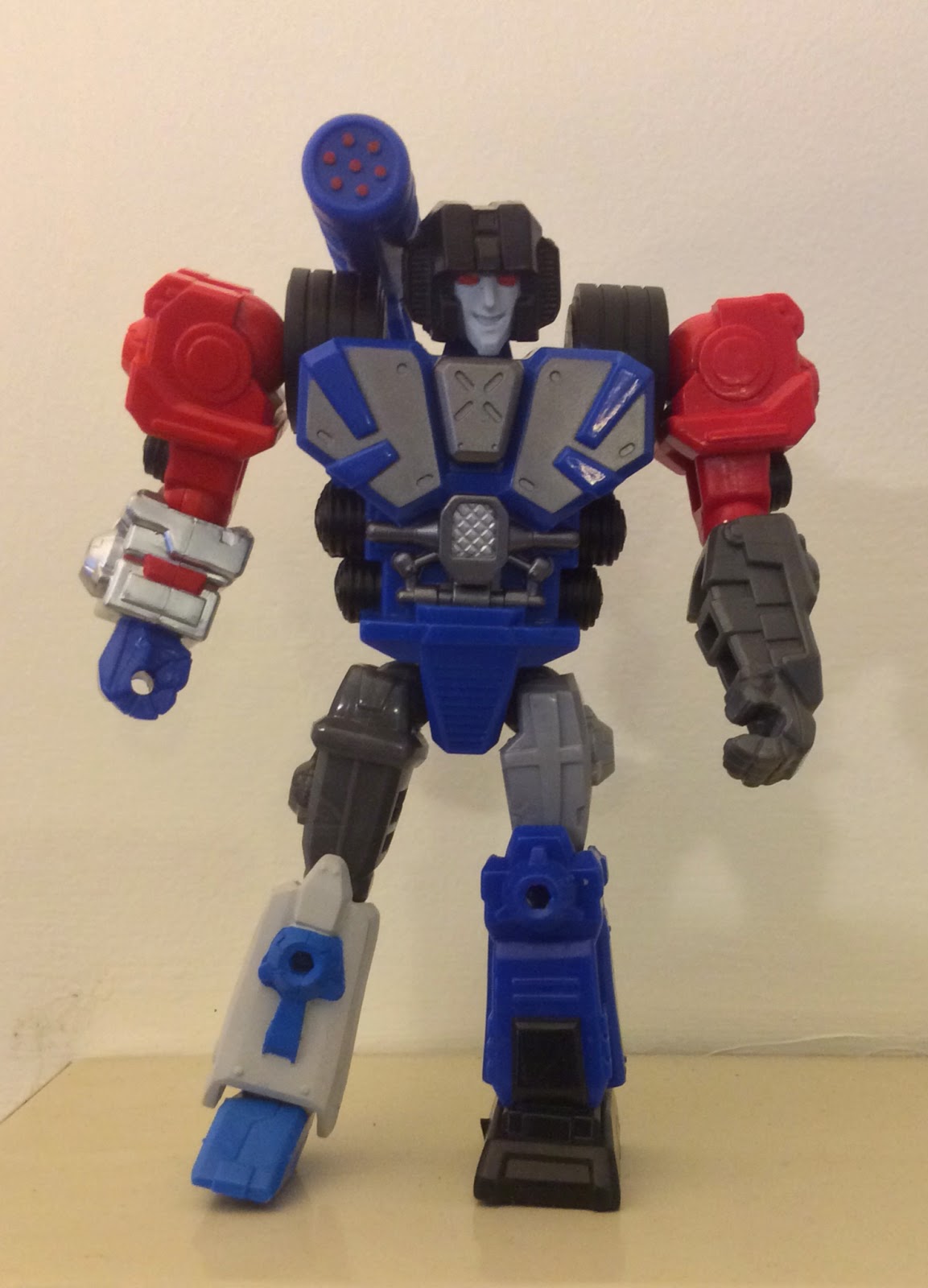 First, let's talk a bit about the Hero Mashers line (because I doubt I'm likely to do so again anytime soon). This is a line of action figures (non-transforming, like the Action Masters of the early '90s) created with universal pegs and sockets to enable swapping out legs, arms, heads, weapons, etc. The idea is that you can "Mash up" your favorite characters into something new, if perhaps a bit whimsical or ridiculous, like this mash-up of Heatwave, Soundwave, and Starscream seen here. 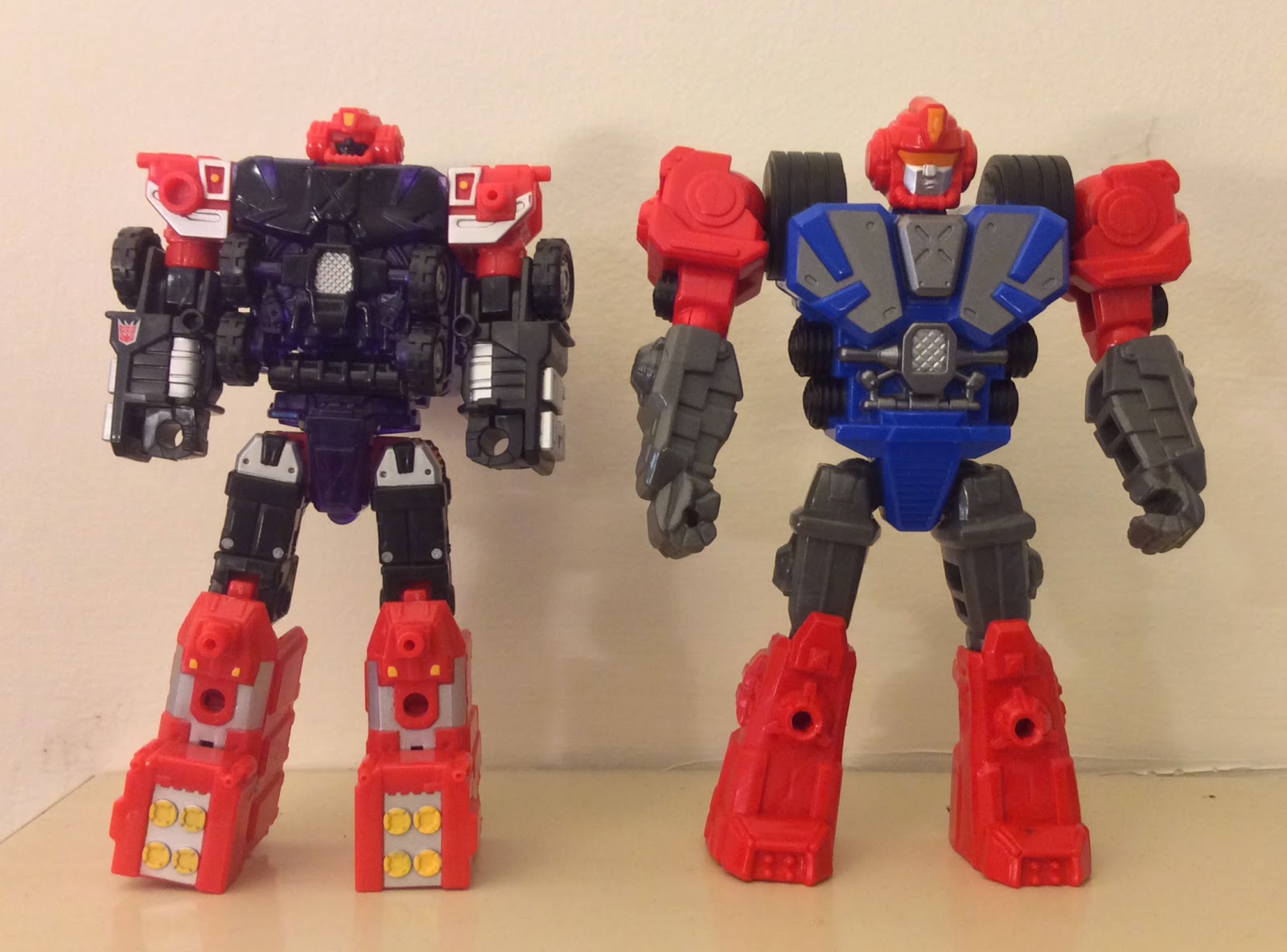 Now, about Heatwave. Although the homage is no doubt lost on the majority of the children likely to pick up this toy, it is immediately recognizable as the same character as the Heatwave toy that came out five years ago as one of the membership incentive figures to the Transformers Collectors' Club (seen here on the left, alongside the Hero Mashers figure as it comes out of the box... minus its weapon, which I'll get to in just a bit).

Well, the recognizability implies it's the same character, but that's where the awkwardness starts to come in. The name on this toy is technically "Autobot Heatwave," (no doubt because the compound name is far easier to trademark than simply "Heatwave" would be), whereas the club figure was actually a Decepticon, albeit a good-guy Decepticon from the Shattered Glass universe. So either this guy has switched sides (and universes!) or he's a different (if similar) Heatwave altogether. 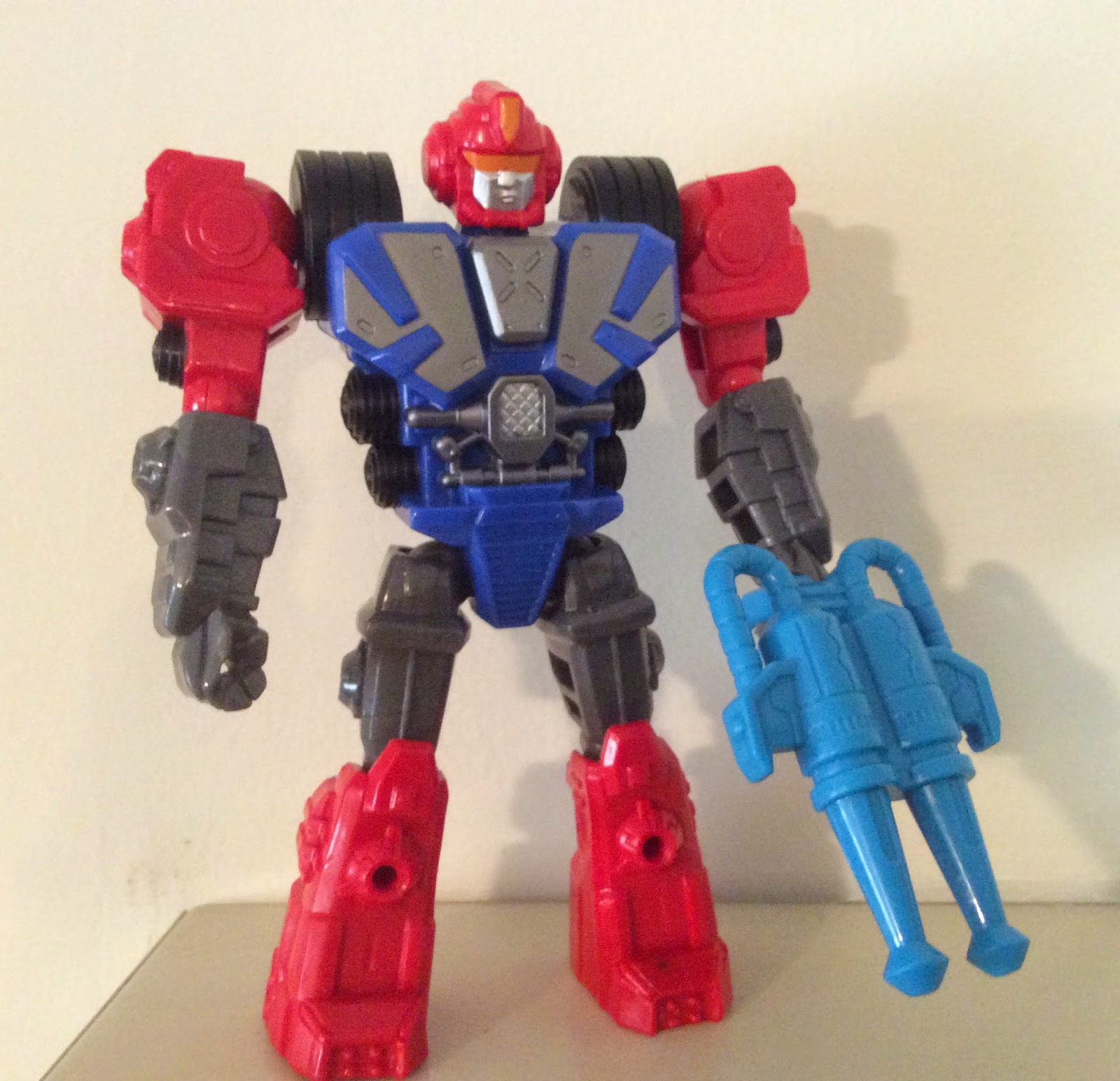 That's not really so bad. Transformers fans already accept that there are multiple characters with any given name. Live-action movie Optimus Prime is not the same guy as Generation One Optimus Prime, even if they have certain similarities, and could be rightly said to arise out of the same archetype. Even same-named characters that don't resemble each other, say Generation One Scourge and Robots in Disguise Scourge, tend to cause only minimal confusion. The awkwardness here arises from using elements of two archetypically-distinct versions of Heatwave in this Hero Mashers toy, which has been given a weapon virtually identical to one that comes with a Heatwave toy in the Rescue Bots line (someday, I'll actually buy one of the toys from this line so I can discuss it further, but as it is a line predominately geared towards pre-schoolers, I've been slow to do so). Other than the name itself, Rescue Bots Heatwave has little in common with the Shattered Glass version of Heatwave that otherwise seems to be referenced here. I suppose that the idea of "mashing up" characters goes even deeper than originally suspected!
Posted by Mark Baker-Wright at 9:00 AM No comments: