A few weeks ago, the theme for the 2013 BotCon was announced to be "Machine Wars." We still don't have any more specific information in regard to characters or molds that will be used, but that obviously hasn't kept fans from speculating about what a set based on the 1997 Machine Wars line might look like. Let's look at Machine Wars Mirage as we consider the possibilities... 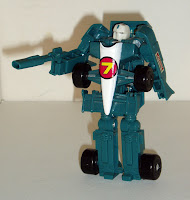 Machine Wars molds came in two basic types. Four "basic" molds that all featured a "flipchanger" one-step, spring-loaded transformation (I'm not counting the step of pulling the figure's weapon out of storage, which obviously must be done manually), and four larger molds that originated in the European markets in the later years of Generation One. The four "basic" molds were all used twice, while the four larger molds were used one time apiece, for a grand total of twelve Machine Wars toys. While I can't see BotCon going with "flipchanger" designs (which exist, but aren't especially common among more modern molds), I do wonder if a possible pattern exists here that BotCon might emulate for their "Machine Wars" set. I could easily see about half of their dozen-ish toys (recent BotCons have given just over that number) being repaints of each other....

But what about the homages themselves? Now that I'm getting around to Mirage, I can say I've covered all four of the "basic" molds in the Machine Wars line, although in the case of Beast Wars 2 Dirge, I covered a later redeco of the Machine Wars mold, since I don't have either of Machine Wars Thundercracker or Skywarp. Looking strictly at those toys, it becomes fairly clear that two of these molds — this Mirage mold and the one for Megatron/Megaplex — have heads that were clearly molded to resemble the Generation One character the toy is named for. The same cannot be said of the Hoist/Hubcap mold or the Thundercracker/Skywarp mold (FYI, Mirage's Machine Wars redeco was named Prowl, but although Prowl is apparently intended to be the Generation One character, there's little in the mold that suggests it's any kind of an homage beyond the name use). This doesn't give us much help in determining a pattern, except perhaps to note that the same hit-and-miss pattern of homages might be said of BotCon exclusives of the past, as well.

I have less experience with the larger, Europe-originated, molds that were brought over and redecoed for Machine Wars. In fact, the only specimen I currently own that uses any of these molds is Universe Soundwave. Even so, there's not much of a pattern that I can glean out of those four toys, except to say that they pretty much all make for fairly weak homages for one reason or another. That said, since we're only talking about eight molds, total, for the entire original Machine Wars line, the lack of cohesion among the homages has been suggested, itself, as a way that BotCon 2013 might create its set of "Machine Wars" toys. However, I'm not at all confident that a set of toys that bear little-to-no resemblance to the characters whose names they're given will go over very well with fans once the choices are announced.

I do have one additional note that I'm holding out a small hope that the folks at BotCon might notice. The Tech Specs for the Machine Wars toys all used the Generation Two faction symbols! These are symbols that have been largely forgotten today, although they have resurfaced on the occasional Generation Two homage. BotCon 2013's "Machine Wars" toys represent a rare opportunity to give these symbols some love. However, I don't think these symbols appear on any of the original Machine Wars toys themselves (which mostly ignore symbols entirely for some reason, and the few symbols that do appear are of the Generation One variety, since in those cases the molds were created back in that era*), so I can't say that I hold that hope with any real confidence that BotCon will follow through. Time will tell....
*It was later brought to my attention that there was a G2 faction symbol on the original Machine Wars Skywarp toy. Sadly, the reveal of BotCon 2013 Skywarp on February 12th displays a G1 symbol.
Posted by Mark Baker-Wright at 10:00 AM No comments:

Although it is fairly uncommon, there are a few Transformers toys that depict characters that were first seen in some other part of the Transformers franchise. Drift was one such example, having been created for the IDW comics. Spike, the Headmaster partner of the original Fortress Maximus, clearly homages a prominent character from the original cartoon, and is perhaps the earliest example of this trend. Arguably the first toy created for a previously-comics-only character is Jhiaxus. 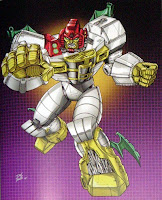 Jhiaxus was a character created for the short-lived Transformers: Generation Two comic book of the early 1990s (in fact, the name is intended to be pronounced, "Gee-ax-us," in reference to the fate that Simon Furman correctly predicted for the comic book). This toy, a repaint of Beast Machines Jetstorm (and also used for other toys, such as Universe Skywarp), bears practically no resemblance to the Generation Two character, but "Jhiaxus" is the kind of distinctive name that simply doesn't show up by coincidence! The bio given to Jhiaxus in the only edition of the Official Transformers Club magazine to come out from 3H Productions (before the license was given to current club-runner Fun Publications) suggests that the different body was created by Unicron after Jhiaxus was abducted (along with many other Transformers) to serve Unicron's purposes. 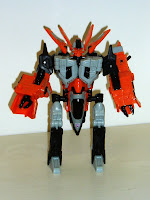 Having already featured Skywarp (even if it was nearly four years ago), there's little need to talk about the aspects of this toy that it shares in common with that one. Just click on Skywarp's link above for that stuff. It is, however, worth noting that this version of the mold has some noticeably softer plastic in places, especially the black parts (some parts, such as the head-fins, were soft plastic on other versions of the mold already). Some fans have suggested that this might have been a cost-cutting measure on Hasbro's part, but although at least one other toy from this mold also features this softer plastic, this has never been proven. These toys may be nothing more than a fluke of the era.

When this Jhiaxus toy came out in 2003, it created a fair bit of buzz among the fandom because of the novelty that Hasbro would reference a comics-only character in such a way, even if it was just a repaint that bore little-to-no resemblance to that character (toys such as Drift have demonstrated that Hasbro has been willing to do far more in years since), but that buzz died down after a year or two. However, Jhiaxus hasn't been entirely forgotten. Just this past year, Jhiaxus was the main antagonist in Fun Publications' club comic, featuring this version of the character for the first time in nearly a decade. It's nice to see this character show up again in this form.
Posted by Mark Baker-Wright at 10:30 AM No comments: 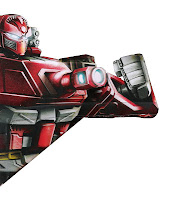 I was somewhat surprised to learn last week that Transformers fan and author Jim Sorenson's blog has been hiatus for almost as long as mine has. Despite the fact that both of us live in the greater Los Angeles area, this is purely coincidental (in fact, the only times Jim and I have ever met in person have been at Transformers conventions and book-signing events). I don't know if I should take comfort in the similar timing of another blog's hiatus, or if that fact should make me feel more guilty, but since Jim's back up and running, I probably should take that as a cue to do the same.

A few years ago, I did a feature on the two versions of the classic character Warpath that were available at that time. In 2011, just a year or after I wrote that article, yet another Warpath toy was released, this time at the "Deluxe" price-point (which I really think should be renamed, as it's more or less the standard size. Shouldn't the word "Deluxe" imply something better than the standard?). Like the "Legends" version of Warpath from 2009, this version of Warpath turns into an "H-tank." This imaginary style of tank has been fairly popular in the Transformers franchise, as it provides for separate arm and leg transformations fairly easily.

In addition to Warpath's signature chest-turret, this toy also has a working missile launcher and an ammo rack, both of which can (if desired) be detached from Warpath's shoulders (or turret, if in tank mode) and re-attached anywhere an appropriately-sized rod can be found. These kinds of accessories are often called "c joints" within the fandom (because the shape of the clip), and quite a few Transformers of this era were using them, making for a myriad of mix-and-match possibilities. 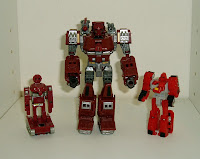 Although I think the Deluxe price-point may no longer be living up to its name in general, there is little doubt that this version of Warpath is quite a bit larger, more detailed, and able to hold a far wider variety of poses than either of its predecessors. The odds are, if you're at all interested in this toy, you've already picked it up sometime over the past year or so, but if you haven't, I strongly urge you to do so. The toy can still be found at brick-and-mortar stores with a bit of searching, but whether you prefer that route or just picking it up online, it shouldn't be hard to get, and there's no reason anyone should have to pay too much for it.
Posted by Mark Baker-Wright at 9:19 PM No comments: