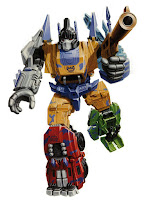 Although the Generation 2 line was retired in 1995 in favor of the massive changes in store with Beast Wars, the brand has hardly been forgotten, and indeed has been revisited by Hasbro several times since then. In 2012, a set of molds created for the Constructicons as they appeared in the Fall of Cybertron games were given a full "G2" treatment in one the most comprehensive homages to-date.
Read more »
Posted by Mark Baker-Wright at 10:25 AM No comments: 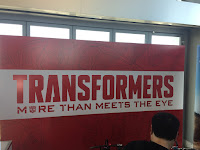 Read more »
Posted by Mark Baker-Wright at 10:44 AM No comments:

For this episode of Not Your Father's Autobot, we're discussing Transformers: Generation 2 issue #7, cover dated May, 1994. This issue can be found reprinted via the Transformers: Rage in Heaven paperback, which may be purchased via Amazon. Listeners may also wish to try to find a copy of either the collected paperback or the issue itself via eBay (purchases through these links do not support the podcast in any way).
Read more »
Posted by Mark Baker-Wright at 8:00 AM No comments:

While the period of Transformers history we now consider the Generation 2 line (even though the actual words "Generation 2" had already been dropped by this time, at least in the United States) was ending in this country, there were a few toys released in other parts of the world that never made it here at all. Perhaps most well-known among these are the Power Masters. Power Masters (not to be confused with the "Powermasters" of 1988, which included the first update of Optimus Prime since the original, as well as Joyride) were essentially similar to the Throttlebots, in that they were fairly simple toys with pull-back motors. The main difference in the Power Master gimmick was that you couldn't just let go of the toy after pulling it backward and expect it to shoot forward. Instead, you had to insert one of its weapons into a slot on the toy (which was the same in both robot and vehicle mode), which acted as a key to unlock the mechanism that held the motor in place. Only then would the toy roll forward.
Read more »
Posted by Mark Baker-Wright at 10:30 AM No comments: