When talking with a friend of mine (who has seen my blog) the other day, I was asked about the little head that appears as my icon on Blogger. Clearly, this isn't my face! (Actually, the current picture is, but it wasn't so at the time) It occurred to me that I've never explained on the blog itself what that is, and that now is a good time to do so.

The head is part of a customized action figure I kitbashed some months ago to resemble G.B. Blackrock. Long-time Transformers fans will know that Blackrock was an important character in the early Marvel Transformers comics. Blackrock was an oil tycoon who, after having several of his energy plants attacked by the evil Decepticons, formed an alliance with the heroic Autobots. In exchange for their protection from future attacks, he provided them with a source of fuel. Toward the end of the Marvel series, Blackrock reappeared to form an "X-Men"-like group of heroic mutants, dubbed the "Neo-Knights," to assist in protecting Earth from the Decepticons.

The idea for my figure came from a similar figure created by long-time Transformers fan Zobovor, using a J. Jonah Jameson figure from the Spider Force line of toys of quite a few years ago. For my figure, I used the more recent J. Jonah Jameson figure that came out with the first Sony Spider-Man movie. The picture to the right representing this figure came from www.toymania.com. I picked up my figure from Target on clearance for under $2.

As with Zobovor's figure, I was glad to find that the vest was a separate piece from the rest Jameson's shirt. Or at least, it was in part. Only the front proved to be removable, leaving the back of the vest, which was molded into the rest of the figure. This needed to be smoothed over with modeling putty.

Another aspect of the figure that needed major reconstruction was the huge lever sticking out of the back. The idea was that you could move this lever up and down to make the figure smash it's fist on top of a desk that was included with it, making lots of "cups" and "papers" on the desk wiggle about. I had no need of the desk, nor of the lever, and it had to go. I cut as much of it away as I could with pruning shears (which I don't recommend if you want to keep the shears in good shape!) and filled in the rest with putty. 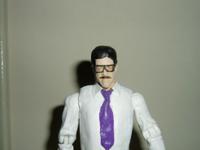 There were three other areas of the figure that needed noticable, if minor, structural change. One was the head, as Blackrock's haircut is not at all similar to Jameson's. Again, I followed Zobovor's lead and used putty. Another area was the tie. The folks who made the Jameson toy cheated a bit on the tie, only making just enough of it to be visible above the vest. Once the vest was removed, it was obvious that the tie was WAY too short! I used putty to lengthen the tie to a more realistic size. The final thing was glasses. For these, I cut a piece of plastic out of the remnants of a small Transformer package, used a black paint marker to create "rims," and glued the resulting glasses to the head after the whole thing was repainted.

Unlike Zobovor's figure, which he claims only took a couple of hours, I painted my figure over the course of several weeks, often adding a new coat once one had dried to make sure that none of the pin-stripes of Jameson's shirt showed through the white. I use acrylics, both in paint markers and in jars using a brush. I find that they dry more thoroughly on plastics than enamels, and acrylics hide brush errors more forgivingly. 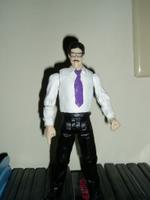 The end result now sits on top of my bookshelf, and I've used an image of the head as my avatar not only here, but on several of the Transformers message boards I frequent, where I often go by the alias of G.B. Blackrock. As with this board, I usually only give my real name in personal e-mails, rather than on the public boards. It's not that I don't want people to know who I am, so much as I choose to avoid spam in this way. For similar reasons, I tend to avoid using the name of the seminary I work for, even though most of my friends (who also go to the same school) obviously know it already!
Posted by Mark Baker-Wright at 8:50 AM No comments: