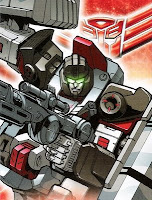 The five figures in the BotCon 2009 box set tried to balance out new figures with different kinds of homages. Whereas Thunderclash homages a toy that was exclusive to the United Kingdom, Flak is a new version of a Micromaster that was widely available in the United States in 1989. The original Flak was a member of the Micromaster Battle Patrol. 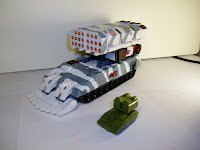 Like his Micromaster counterpart, BotCon 2009 Flak (a repaint of Cybertron Defense Scattorshot from 2006) turns into a mobile artillery system with multiple missile battery. Here you can see the two Flaks side-by-side for comparison. The two have rather different color schemes. It's sometimes said that an earlier CD Scattorshot repaint available in wide release, Overload, was created as a G1 Flak homage. It certainly has a color scheme that more closely reflects Flak's Micromaster form. It appears that when Fun Publications opted to do Flak, Overload wasn't yet on store shelves, but they learned of Hasbro's plans in time to at least ensure that the BotCon version didn't just look like a copy of the wide release toy.

Fun Publications went a step further than that, giving their version of Flak a remolded head that, although in different colors, is a clear homage to the original. 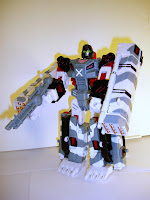 Often, when Fun Publications creates a toy that is clearly an homage to a Generation One character, it is intended to be the same character previously seen, but in a new body. The truth for Flak is a bit muddier. Besides the fact that the "Wings of Honor" story takes place millions of years before the stories we're more familiar with, the story--while definitely "cartoon-esque" (in the words of Pete Sinclair)--is not set in any particular continuity. So there's no clear reason to assume that this Flak becomes a Micromaster in a few million years, anymore than one would assume that any particular Generation One Optimus Prime should become Armada Optimus Prime. They're different continuities. 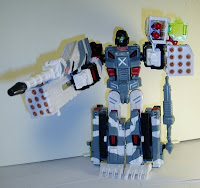 Being a repaint of a Cybertron figure, Flak comes with a "Cyber Key," which in this case has been painted to include an "Elite Guard" logo. Inserting this key into either of the batteries on Flak's arms opens it up to reveal additional weaponry. One presumes that Decepticons would just as soon not find themselves faced with Flak unless they're very well shielded!
Posted by Mark Baker-Wright at 12:00 AM