So I'm still getting the hang of this Loot Crate thing. It wasn't until some time after I'd posted last month's highlight, featuring a Darth Vader Bobble-Head, that I'd realized "Maybe some people don't want to get spoiled by the subject line or the image they see before they've even clicked the link...". No one posted any angry comments last month, but I'm going to play this a little more coy this time around. If you want to see which item I've highlighted from this month's Loot Crate, click the "Read more" link (or keep reading the next paragraph, depending on what your current view of this page is like). If not, no harm done.... 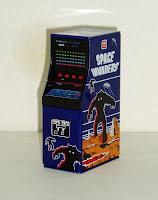 The theme for this month's Loot Crate is "Token," and has items related to arcade video games. Perhaps no item highlights the theme more than this candy tin shaped like a classic Space Invaders video game. While Space Invaders (released in 1978) may not have been the first coin-operated video game (Pong was released in 1972), it was one of the first to become really popular. Word has it that entire video game arcades opened up featuring only this game. 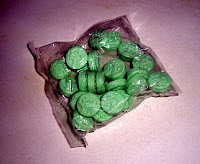 But back to this tin. Theoretically, it exists to house the candies inside, but I don't think too many people will care about them. I've tried to edit the picture just a little bit to bring out the fact that the candies have little "Space Invader-character" shapes on them, but let's face it. These things are pretty forgettable. It's the tin that's the highlight! 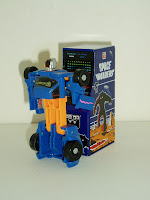 Admittedly, the tin is pretty small. Too small to properly be in scale with most of my action figures (most of which are of the 3 1/2" variety). However, since Transformers come in pretty much all sizes, I didn't have to look to hard to find one that worked with the Space Invaders tin. Here's Skram enjoying a game.

If you'd like to get boxes full of geek-related "loot" like this, check out Loot Crate's web site and sign up! If you'd just like to find out what other items are in April's box, you'll still want to go to the site, and then scrounge around for the videos that fans are posting of their "unboxings"! Either way, it's worth checking out!
Posted by Mark Baker-Wright at 10:00 AM No comments: 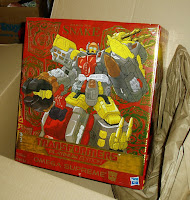 I've reached a point in my Transformers collecting where more of my purchases are likely to be online than at the local store, as the vast majority of what's on the shelf holds little interest compared to the prices now being charged. This actually comes as a surprise to me. While I certainly understand the reality that shipping items costs money, the thought of having to pay for shipping always incites in me a visceral reaction of aversion. Thankfully, Omega Supreme is exclusive to Amazon.com (well, also to BigBadToyStore) in the US, and shipped for free as it's well over Amazon's usual $25 threshold. 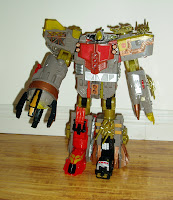 This version of Omega Supreme, which came out at the beginning of this year, is a remold of the version of the character created for the Energon line back in 2004. These colors are much more in keeping with the original Generation One toy, and it's easy to assume that this toy is intended to be an updated version of that character. The TFWiki, however, places this toy in the "Aligned" continuity. While there a couple of cues in the bio and the toy itself that lean in this direction, there is room for interpretation, and indeed the "Aligned" continuity is arguably more "Generation One-esque" than any previous attempt. If thinking of this toy as representing the original is your preference, go for it!

Omega Supreme's transformation is arguably one of the simplest of all Transformers. Basically, the toy splits down the middle, and each side straightens out a bit to form a vehicle. You can play with two vehicles, as seen on the left here, or combine them into one long train, as in this link. 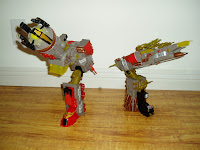 There is a bit more you can do with these parts, however. Bend one of the limbs (the one seen in these pictures on the left) around a bit to get what the box still calls a "working crane" (except that, due to changes from the original Energon version of the toy, it neither "works" nor resembles a crane in any meaningful sense), while the other (seen here on the right) is a reasonably convincing weapons platform. 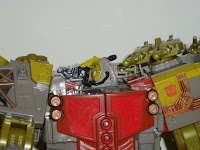 I'd be lying if I claimed to have a real explanation for the recent trend in Chinese zodiac-themed Transformers toys. This seems to have started last year, with a "Year of the Dragon" Optimus Prime toy (using a mold created for the most recent live-action Transformers movie). There are two "Year of the Snake" toys this year, the other being a remold of Energon Optimus Prime, and that toy retains the ability to combine with this one to create a new form. I don't have any iterations of the Energon Optimus Prime mold, however, so I can't demonstrate the combined form here. You'll have to settle for TFWiki for that.

Posted by Mark Baker-Wright at 10:00 AM No comments: