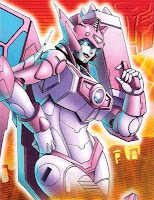 The second figure in the "BotCon Anniversary Pack" (and the last of the thirteen figures released for BotCon 2009) is Elita-1. Elita-1 featured pretty heavily in the BotCon 2007 comic, "Games of Deception." In fact, she was given considerably more to do than several of the characters that were actually given toys at BotCon 2007, which annoyed more than a few fans. But I'll get to more of that in a moment. 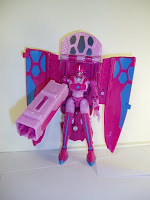 Elita-1 is an homage to a Generation One character that wasn't actually given a transforming toy back in the original Generation One era, but who was introduced in the cartoon episode, "The Search for Alpha Trion," which introduced the concept of "female Autobots" to the Transformers franchise. BotCon Elita-1 is a straight repaint of Cybertron Thunderblast. Thunderblast actually wasn't all that popular a toy back in the Cybertron line (a classic example of the "shellformer" transformation, which tends to result in disappointing toys), but is one of few Transformers toys explicitly created to be a "female" character. 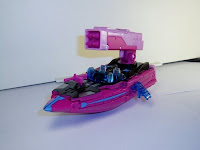 This gets to another reason why Elita-1's inclusion in the BotCon 2007 story (again, even more prominently than characters that got toys at the time) is so controversial. "Games of Deception" was set in what has been called the "Classicverse," a continuity created by Fun Publications to feature the "Classics" line of toys in 2006. The "Classicverse" was not a continuation of the cartoon continuity, but rather of the original Marvel comics continuity as it appeared in the US (i.e., the UK-exclusive material that was created to mesh with the US stuff wasn't included), but only up to the end of the Generation One series (i.e., the material from the US Generation Two comic wasn't included either). The Marvel comics continuity is one of (surprisingly) very few continuities where it was explicitly stated that Transformers had no gender: "No men, no women... no mates!" (They are robots, and not biological organisms, after all.) Why go to the trouble of introducing a cartoon character (especially this cartoon character) into this continuity when this continuity explicitly says "female" Transformers don't exist (especially when you end up sidelining characters that were actually given toys at that convention in order to do so!)? 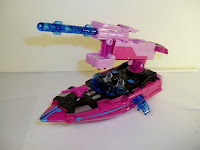 OK. Rant over. What's done is done, and despite Elita-1's ill-suitedness to the "Classicverse," fans have been asking for a proper transforming toy of the character for years (and, no, the movie-continuity repaint of Energon Arcee doesn't count), so a lot of folks were pretty excited to get this toy (and disappointed when it didn't happen in the year following BotCon 2007). Indeed, a lot of Transformers club members who've been asking for this figure and for Razorclaw for years now were furious when they learned that these figures would be BotCon 2009 exclusives. Hopefully the fact that enough were left after the convention to sell them in the club store has placated their anger.
Posted by Mark Baker-Wright at 12:00 AM