Back when I was in high school, I was a member of a local Star Trek fan club that met once a month. Besides watching episodes of the show (both original and Next Generation, but none of the other spin-offs existed yet at that point), we also enjoyed the occasional piece created by fans. One such film we watched, which was apparently presented live at a convention somewhere, was called Wrath Side Story.

As the name might suggest, Wrath Side Story was a mash-up of the second Trek movie, The Wrath of Khan, with the musical West Side Story. To this day it remains one of the funniest Trek parodies I can remember, although I grant that one would probably need to know the stories of both Khan and West Side to appreciate it all. Here are some highlights:

Near the beginning of the story, Khan meets Chekov.  Although the original episode of Star Trek in which Khan featured ("Space Seed") was during the first season (before Chekov joined the cast), it is clear that Khan recognizes Chekov. This has been the subject of much speculation among fans. Wrath Side Story captures this oddity with a single line, spoken by Chekov to his commanding officer: "But, sir! I met this maniac fifteen years ago, and I wasn't even there!"

Of course, the real gems of the parody were the musical numbers. For example, shortly after stealing Chekov's ship, the Reliant, Khan breaks out to the tune of "Maria":

Arguably, the most memorable part of The Wrath of Khan is the death of Spock. Wrath Side Story captures this scene, too, but after Spock successfully saves the day at the cost of his own life, its time to sing again, this time to the tune of "America":

Obviously, it was all pretty silly, which is exactly what made it work. Sadly, even with the ubiquity of information on the Internet, I've never found Wrath Side Story anywhere online. Indeed, I've only quite recently found any other sites that acknowledged that the parody even existed. If anyone has a copy, and feels that it's safe to post, I'd certainly appreciate the chance to see it again.
Posted by Mark Baker-Wright at 7:30 AM 1 comment: 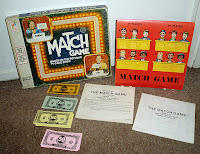 "Get ready to match the stars!"

NBC did a version of The Match Game in the 1960's, but that's not the version that anyone remembers. The iconic version of Match Game is the version that started on CBS in 1973 (with the year proudly displayed after the name—Match Game '73—and changing each year as appropriate until the daytime network version was cancelled), which itself spawned a pair of successful syndicated versions (Match Game PM and The Match Game, the latter of which continued on for some time after the daytime version's end). Similarly, there were several home game versions of the NBC game, but I've neither seen any of those nor cared enough to spend much time searching for them. It's the iconic '70s version that I made the effort to add to my collection.

The object of the game, as perhaps implied by the tagline quoted at the beginning of this entry, is to match the answers of as many of the celebrities playing as possible.  Each episode featured six celebrities, and thus the board game provides six "celebrities" who respond to each question, which is almost always a fill-in-the-blank process. For example, "At the hospital, Steve passed out when the nurse showed him his ____." The exceptions to this "fill-in-the-blank" rule are leftovers from the early days of the 70s version, before the game had quite found what would be its successful pattern, about which I'll say more in a bit. The responses are, according to Wikipedia (and the game instruction booklet itself in the case of the "Super Match" round) actually from the show itself, and thus reflect the ways real people responded to the questions involved, rather than just reflecting the writers of the game questions themselves, as is the norm for most game show home editions. This is a welcome move, and really helps capture the feel of the game without requiring as many as nine people in a room just to play a single game. 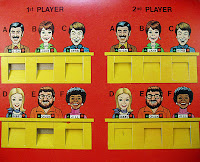 On the actual show, once you've matched a celebrity, you earned a point for that celebrity, but you could not match that same celebrity again in future rounds of the same game. This was displayed on the show by means of a light (either a red circle or a green triangle, depending on the contestant) illuminated next to the celebrity's name. Since the board game doesn't use electronics, it instead marks progress by punching the paper cover of the game board through to the other side, where another punched piece of paper then becomes visible. In the picture to the right, the 1st player has matched "Dick," "Jane," and "Chuck," while the 2nd player has yet to make a match. After the game is done, the punches are easily reset simply by lifting the cover page with the celebrities on it, and the pre-punched folds are able to be reused again and again.

But the board really isn't all that necessary. Really, all one needs to play this game is a set of fill-in-the-blank questions, as well as the short-phrase versions needed to play the "Super Match" and "Head-to-Head Match" bonus rounds. If one has a large enough group available, I would by all means designate a half-dozen of them as "celebrities" to further create a sense of authenticity, but I certainly recognize that getting a large enough group of people interested enough in playing a game show from decades ago may not be the easiest of tasks!

There have been several attempts to revive Match Game since this version finally ended in the early 1980s. None have worked out quite so well. One reason might be that the pattern of game play that the 1970s version of the show found so successful employed a great deal of double-entendre. This worked just fine in the 1970s, when broadcast standards dictated that none of the celebrities could actually get away with writing an outright dirty response. At least one later revival of Match Game on television (in the 1990s) clearly had no such restrictions on the celebrities, and although they still had to "bleep" out a number of responses, the resulting game play simply wasn't funny anymore, and the show died within the year. Other attempts to revive the show since then haven't even gotten beyond the pilot stage. Some have argued that the standards of the culture have simply moved too far today to get away with such mildly suggestive language as was used in the 1970s, and that may be true, but I'm not ready to give up so easily. I think that a talented enough group of celebrities and producers—who know how to be suggestive as necessary, while also knowing that there is a line that can't be crossed without destroying the humorous balance that the 70s show enjoyed—could manage it. But even assuming such people are out there (and I'm convinced that they are), they may not want to use their talents in this way. Until that extraordinary group of people can be found, we'll just have to make do with reruns, and perhaps home games like this one!

Does what you see here interest you? Subscribe to this feed for regular updates!
Posted by Mark Baker-Wright at 12:00 AM No comments: