Ratchet is perhaps my favorite character from all of Generation One, and the "Hall of Fame" banner I put together a few years ago gives a glimpse as to why. Unfortunately, this version of the character is increasingly obscure, and will likely be all-but forgotten in just a few more years. 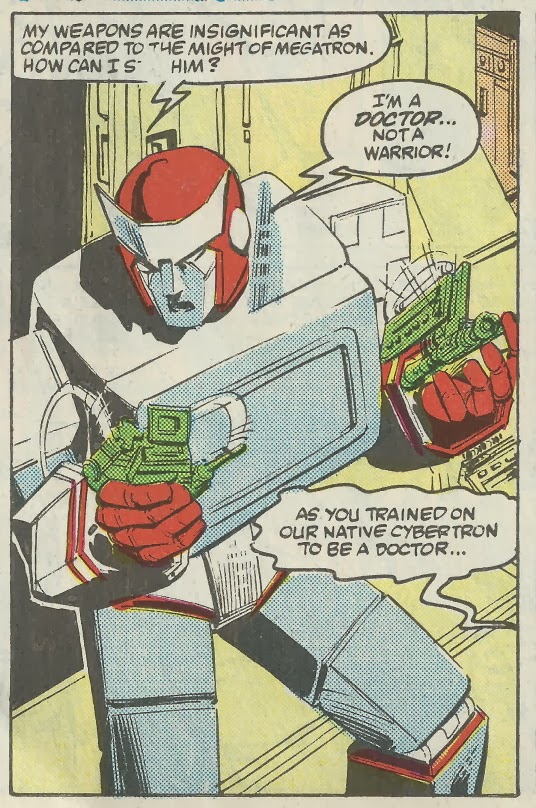 My Ratchet (the Ratchet from the Marvel Comics) was a guy who could fix anything, given the resources, but who often found himself perpetually short of the spare parts he needed to do everything that needed to be done. Even worse, he found himself the last Autobot standing after Shockwave had managed to deactivate all the others during a pivotal battle early in the series. Despite never being trained as a warrior (one can practically hear Star Trek's Doctor McCoy when Ratchet says, "I'm a doctor, not a warrior," in issue #7), Ratchet was able to retake the Ark (the Autobot's spaceship) and free his friends. Before the comic completed its original 80-issue run several years later, he found himself the only Autobot available on at least three more occasions, each time in supposedly-impossible situations, and each time managed to thwart the plans of his opponents. Not even Optimus Prime could make that claim at the time! 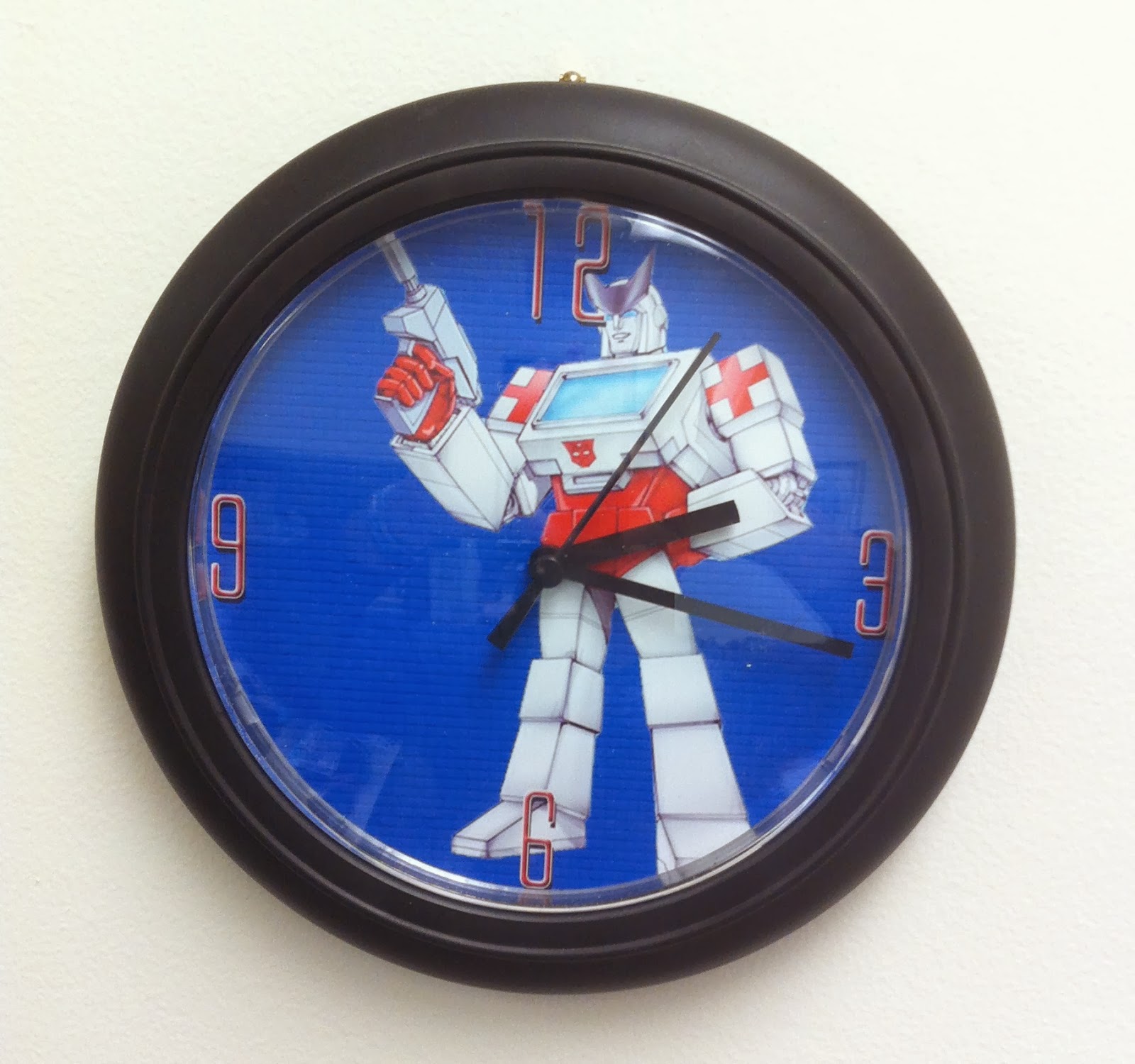 While I've made no secret of my preference for the comics over and against the original cartoon, I don't really blame the cartoon too much for the problem of "reluctant hero" Ratchet's diminishing notoriety. Although the cartoon version of Ratchet was visibly different from the comics version (note the white helmet here, vs. the red helmet of the comic version, as above), I never worried much about that. And although the cartoon version of Ratchet had little in the way of demonstrable personality, that was hardly unusual among cartoon Autobots. Indeed, what little we did see in the cartoon did little to invalidate the more-developed Marvel version. Lack of evidence is not the same as evidence of lack, and all that.... 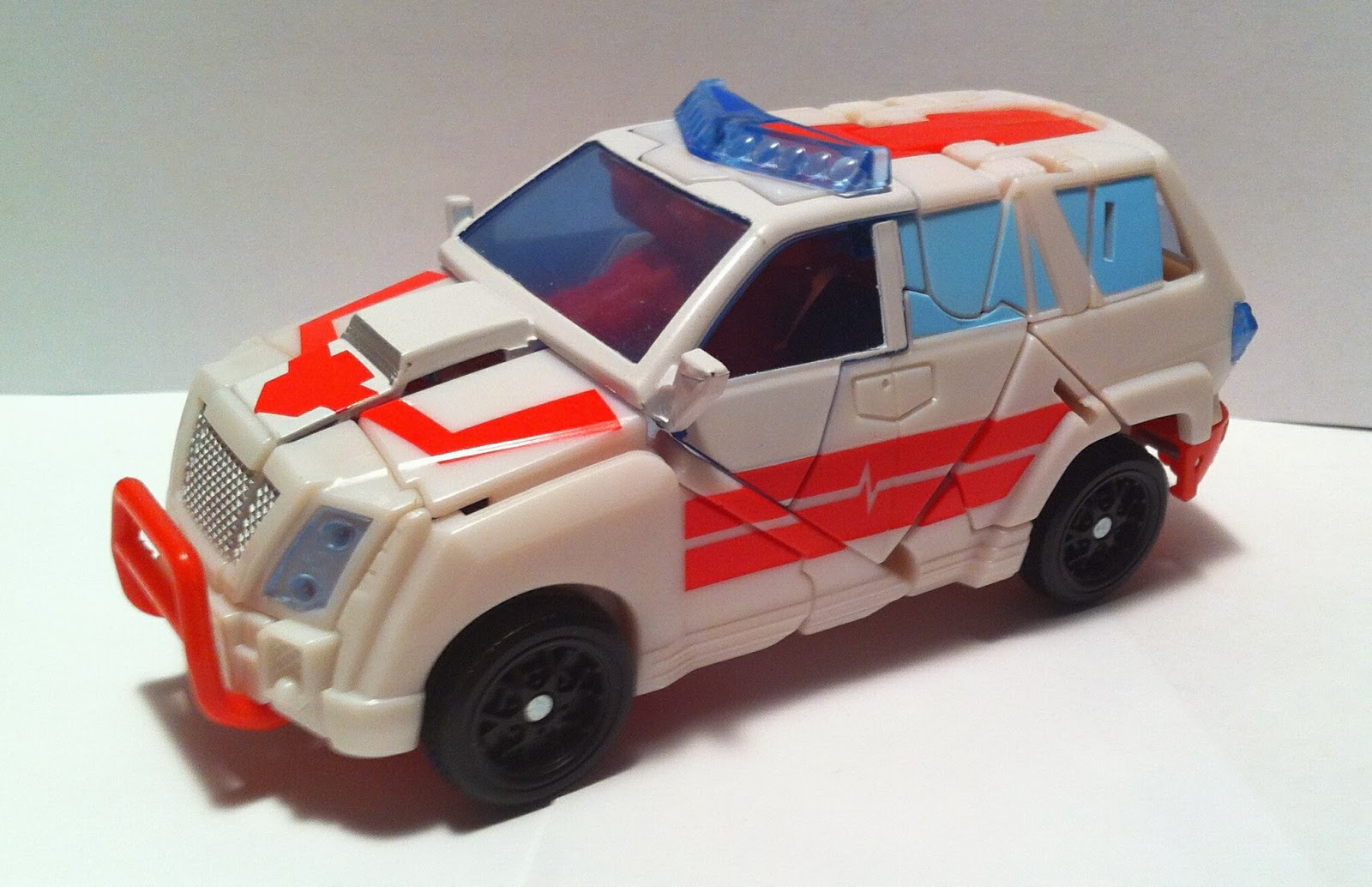 Rather, the problem is that current depictions of Ratchet, even those in nominally Generation One continuities, portray a markedly different character. Ask anyone who only knows Ratchet from one of these modern interpretations, and they'll describe a crotchety old guy who hides a deeply compassionate heart underneath a crusty, grouchy, exterior. While this version of Ratchet is undeniably entertaining, he's just not the guy I grew up with. 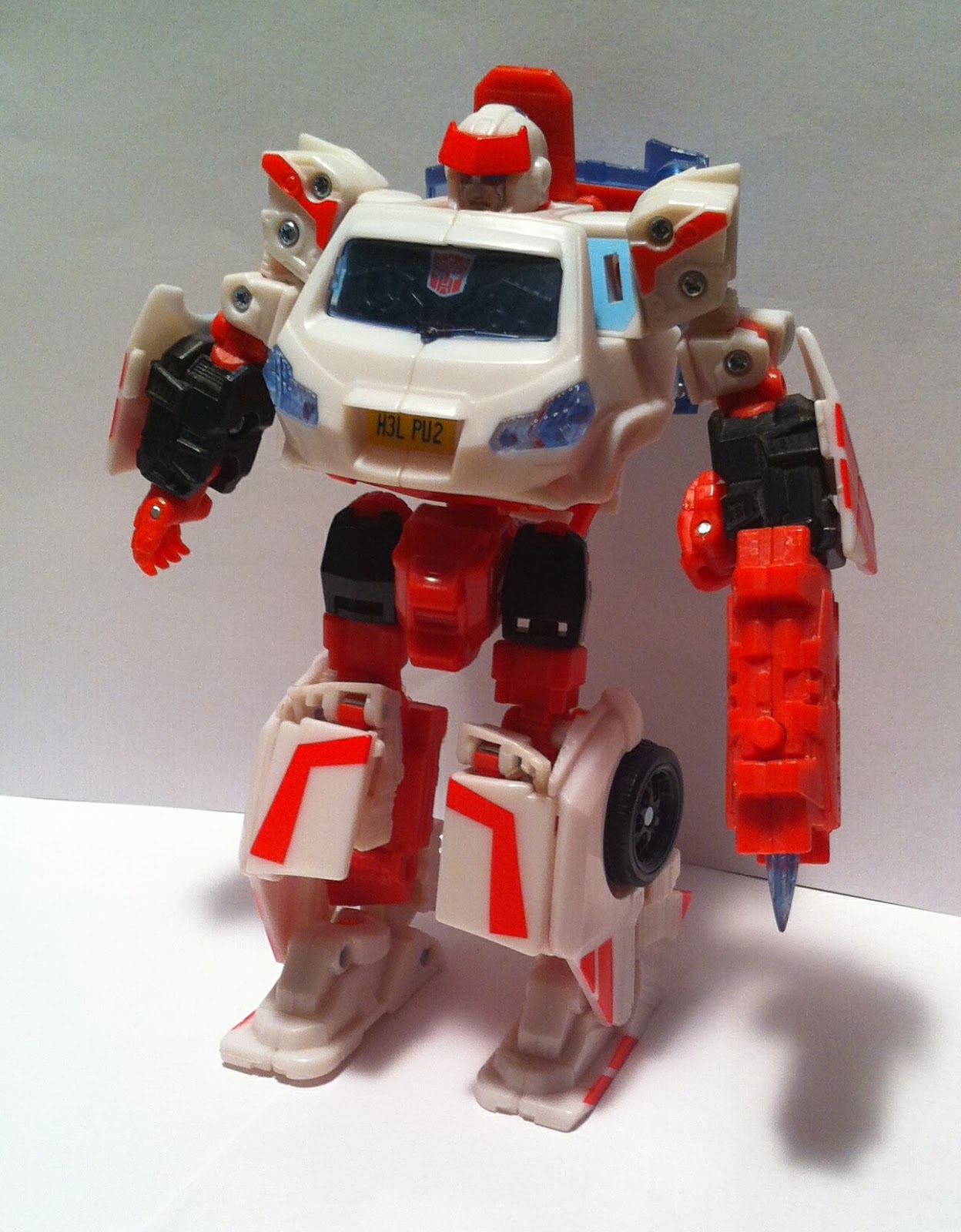 My other main disappointment in regard to Ratchet is that, to this day, he has never gotten a decent mainstream toy (given that he almost always shares a mold with Ironhide, about whom I've said this already, this should be no surprise). The headless original has been featured already, so the toy pictures here are of the more recent Universe toy, but even that's still a pretty awful toy that I really can't recommend to anyone, my affection for the character notwithstanding. Maybe someday a decent toy of Generation One Ratchet will come out for the masses, but having had my optimism back in 2008 dashed by how lousy the Universe toy turned out, I'm afraid it's unlikely to be anytime soon.
Posted by Mark Baker-Wright at 7:00 AM No comments: 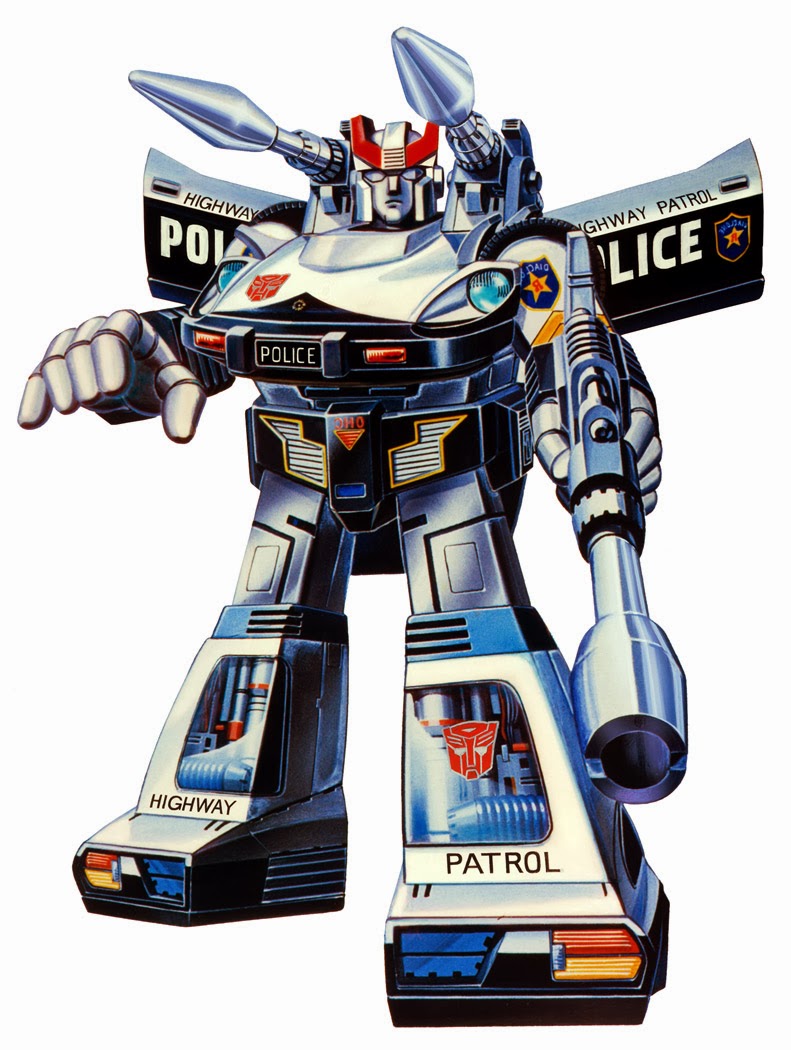 Prowl was one of my first Transformers, and so I've always had some affection for the character. Unfortunately, my impression of the character differs significantly from the now-prevailing opinion held by most fans. Personally, I think Prowl has gotten a bad rap. 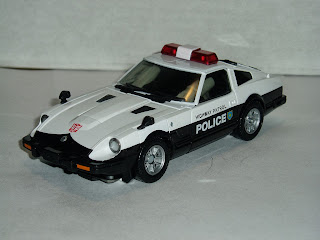 Prowl's original Tech Specs bio calls him "a listener, not a talker," and emphasizes that Prowl is a being devoted to reason and logic. I have thus always imagined Prowl as a perhaps-friendlier version of Mr. Spock, and Prowl's (admittedly unremarkable) appearances in the cartoon seemed to support this interpretation. Unfortunately, because those appearances in the cartoon were so few, and did so little to flesh out Prowl's personality as distinctive (and Prowl's comic appearances of the era did even less), another interpretation has since taken predominance. 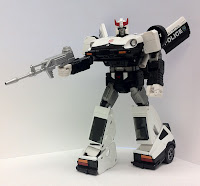 In the last few issues of the Marvel comic before it was cancelled (and presumably in some issues exclusive to the UK, as well), Simon Furman started writing Prowl as a foil to the aggressive Grimlock (undeniably Furman's favorite character). While Grimlock was promoted to the role of Autobot leader (completely ignoring Grimlock's earlier, undeniably disastrous, run as leader under previous writer Bob Budiansky), Prowl became a whiny, very un-reasonable character who opposed everything Grimlock wanted to do (and, adding insult to injury, Grimlock was invariably proven right in these arguments). Prowl came off as the guy who thinks he's smarter than everyone else, and thus comes off as a condescending jerk who everyone hates. Unfortunately, this is the characterization of Prowl that seems to have stuck.

In fact, recent interpretations of the character have only heightened Prowl's antisocial tendencies, making him into an almost amoral schemer willing to do horrible things so long as he believes (again, being smarter than everyone else, after all) that it is to the Autobots' benefit in the long run.

These less-flattering versions of Prowl's character have held dominance for far too long now to ever expect a return to the "friendly Spock" interpretation that never really got any meaningful appearance in the fiction in the first place, but that's still the way I prefer to see the character, and I'm sticking to that.
Posted by Mark Baker-Wright at 9:00 AM No comments: 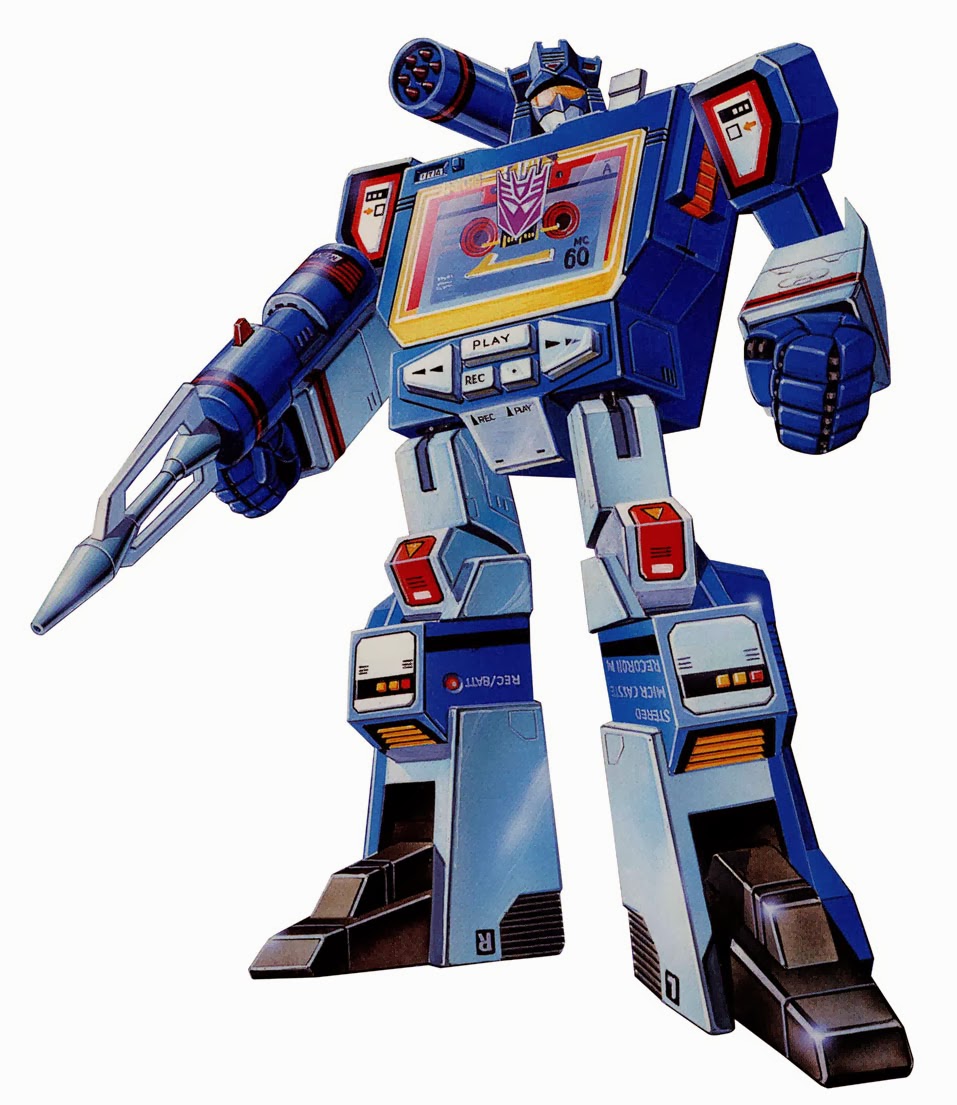 Few Transformers fans old enough to remember can imagine Soundwave without remembering the electronically-enhanced monotone of his 1980s cartoon voice. Easily one of the most memorable characters of original era, the challenge for me is less "what do I say about Soundwave?" and more "what do I say that I haven't said already?" One element of Soundwave's character I seem to have ignored up until now makes Soundwave an interesting study in contrasts.

For fans who remember Soundwave almost exclusively from the 1980s cartoon, Soundwave was perhaps the most loyal Decepticon of the bunch, utterly reliable to do whatever Megatron needed him to do, and always able to boost Decepticon battle forces with the touch of a finger to the eject button that would release cassette-form troops from his chest compartment.

Contrast this with the following words from Soundwave's original Tech Specs bio: "Uses anything he hears for blackmail to advance his status. Opportunist. Despised by all other Decepticons." Doesn't really sound like the same character, does it?

Of course, it's possible to reconcile these ideas, as the TF Wiki attempts to do in the introductory paragraph to the page on Soundwave. But the fact remains that some depictions of Soundwave's character highlighted certain personality traits, while other depictions focused on others, resulting in the apparent contrasts of being a loyal officer in one continuity, while a power-hungry schemer in the other.

It goes without saying that a few things have changed since the 1980s. Soundwave's aforementioned ability to eject cassette-form Transformers stems from the fact that the character was created to be the "tape player guy." Cassette tapes and tape players are all-but unknown to children of today, so modern interpretations of the character have had to come up with something new. The "War for Cybertron" and "Fall of Cybertron" video games (which, as I've said before, I consider to be G1 even if the TFWiki doesn't) have gone with a vehicle mode, seen here to the right of the more traditional tape player version of the character. 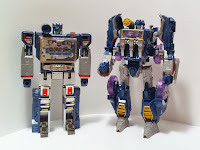 Despite the alt-mode change, Soundwave retains the interaction with the (now formerly) cassette-form characters, perhaps the one group that does seem to be consistently loyal to Soundwave in most fictional depictions (at least, this seems to be true for the five cassettes introduced in 1984. The fact is, the cassettes introduced later seldom got as much fictional attention, and the most prominent Decepticon example of an exception: Ratbat, is most remembered totally apart from being Soundwave's minion).  Since those cassettes make up fully half of the Decepticon line-up of 1984, it seems safe to say that Soundwave can defend himself against almost anything that the Decepticons who "despise" him for his blackmailing activities might come up with. He's not going anywhere.
Posted by Mark Baker-Wright at 9:00 AM No comments: