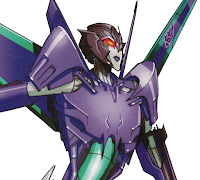 Since the earliest days of the Transformers franchise, new characters were created simply by repainting a mold created for one character into new colors. The original Starscream was arguably the poster-child for this process, being used also for Thundercracker and Skywarp within that first 1984 set of toys. This reality became the basis for a gag many years later, during the Transformers Animated cartoon, in which Starscream created clones of himself to assist in his quest to defeat both the Autobots and assume command of the Decepticons from Megatron. Unlike "traditional" clones, Starscream's clones were by no means identical. Although they shared a body-form, each was depicted in a different color scheme (usually an homage to one of Starscream's mold-mates from Generation One), and each exhibited an exaggerated single aspect of Starscream's own personality. One was a compulsive liar, and one was a coward, just to use two examples. One, who would come to be known as "Slipstream" (but only outside of the Animated cartoon itself, as the clones were never named within it) was female, and pointedly told Starscream not to ask what aspect of his personality she represented.

While TFcon is one of the most popular Transformers conventions out there (arguably even better, at least to hear some folks tell it, than BotCon was even in its prime), its unofficial status means that it has to do without official Transformers exclusives. That doesn't mean they have nothing special to offer, of course, especially not when third party companies can step up and create something special for TFcon themselves. Delta Manus was one of the exclusives that one could get at TFcon when it was in the Los Angeles area just a few months ago.