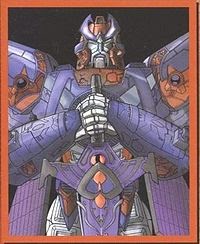 With BotCon 2014 less than a month away, it seems time to get back into the swing of things here on the blog. This year's theme for the convention toys will be "Pirates vs. Knights," an evocative concept that has generated a great deal of speculation about what characters and molds will be used. One of the molds suggested has been the Vector Prime mold, but since I've already featured that toy (and also used it in my Pre-Beast Wars Family Feud photocomic), I'll instead showcase the BotCon 2007 use of that mold as Alpha Trion. 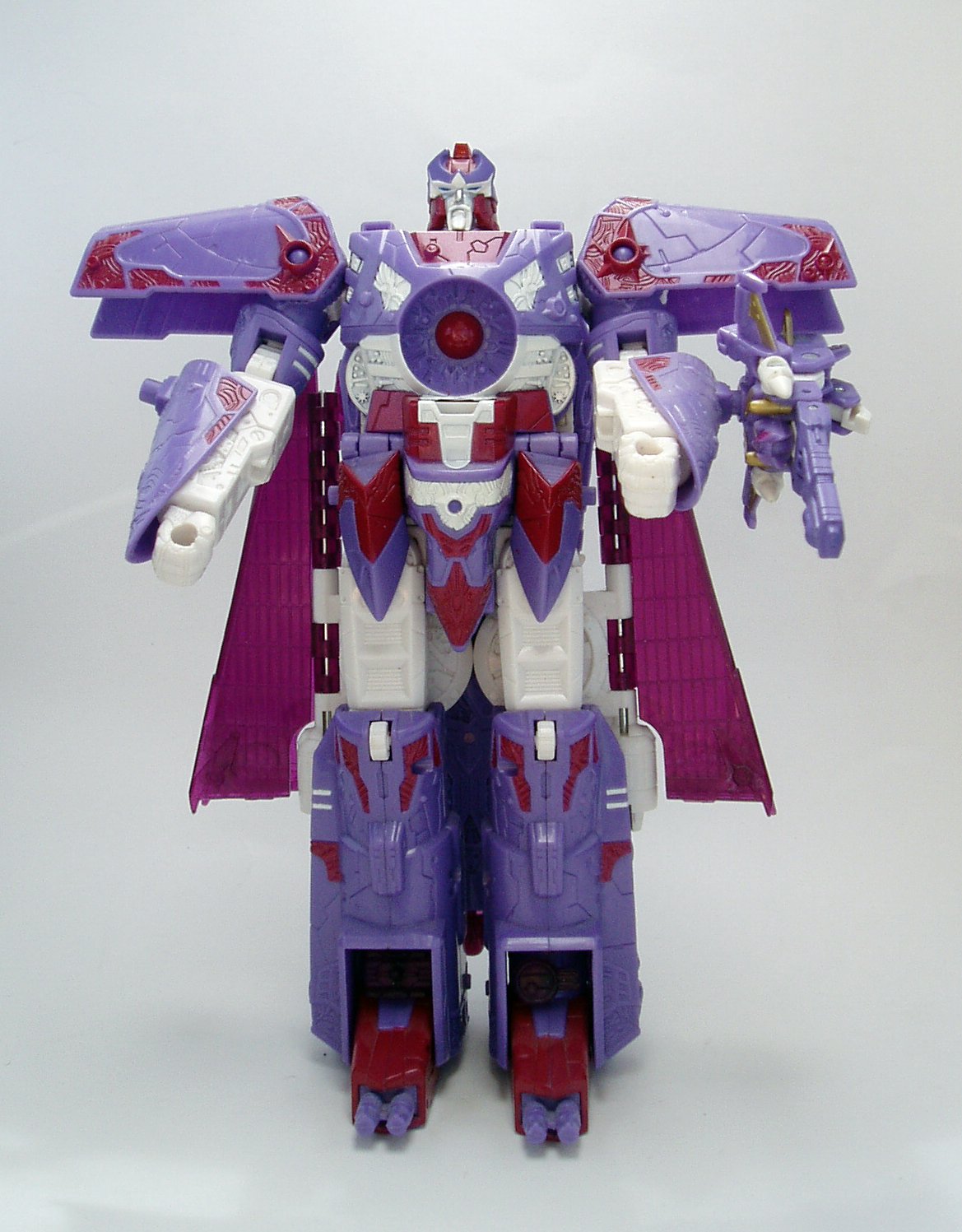 The character of Alpha Trion dates back to the second season of the original 1980s Transformers cartoon. Alpha Trion is clearly one of the oldest of all Autobots, and serves as a wise grandfatherly figure whenever he shows up. There seems to have been an effort to create a toy of this character around 2003 or so for the pre-Fun Pub convention, and indeed this concept did show up in the Wreckers comic of that era, but no such toy was ever produced. As such, the 2007 BotCon exclusive became the first transforming toy of this character ever released. 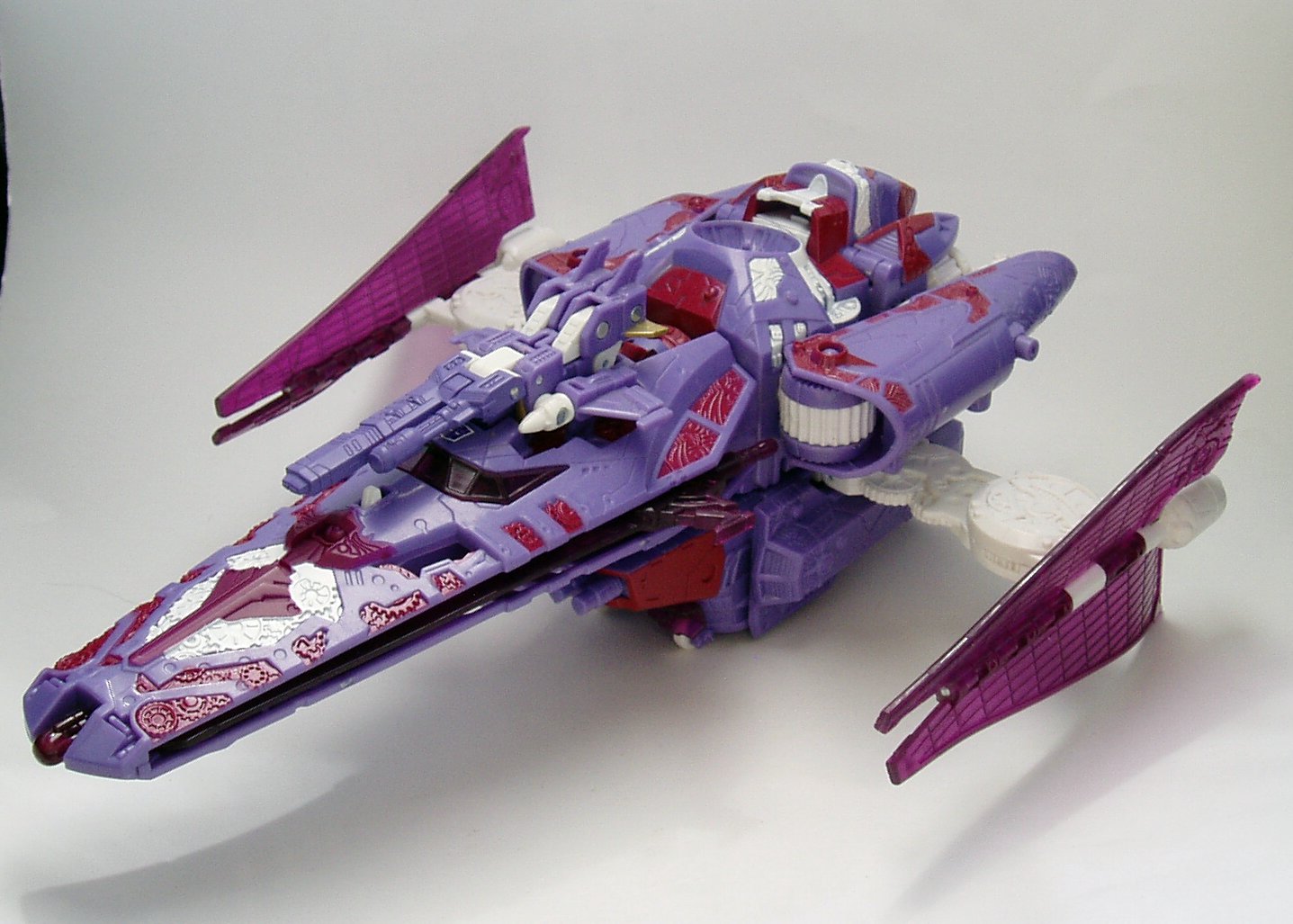 That a transforming toy of Alpha Trion was ever made at all was perhaps both inevitable and ironic. While Alpha Trion was a popular character from the '80s cartoon, he had never been seen in any non-robot mode during its run. Arguably, this made the job of choosing a toy for the convention exclusive that much easier, and the Vector Prime mold always seemed to me to be an inspired choice. 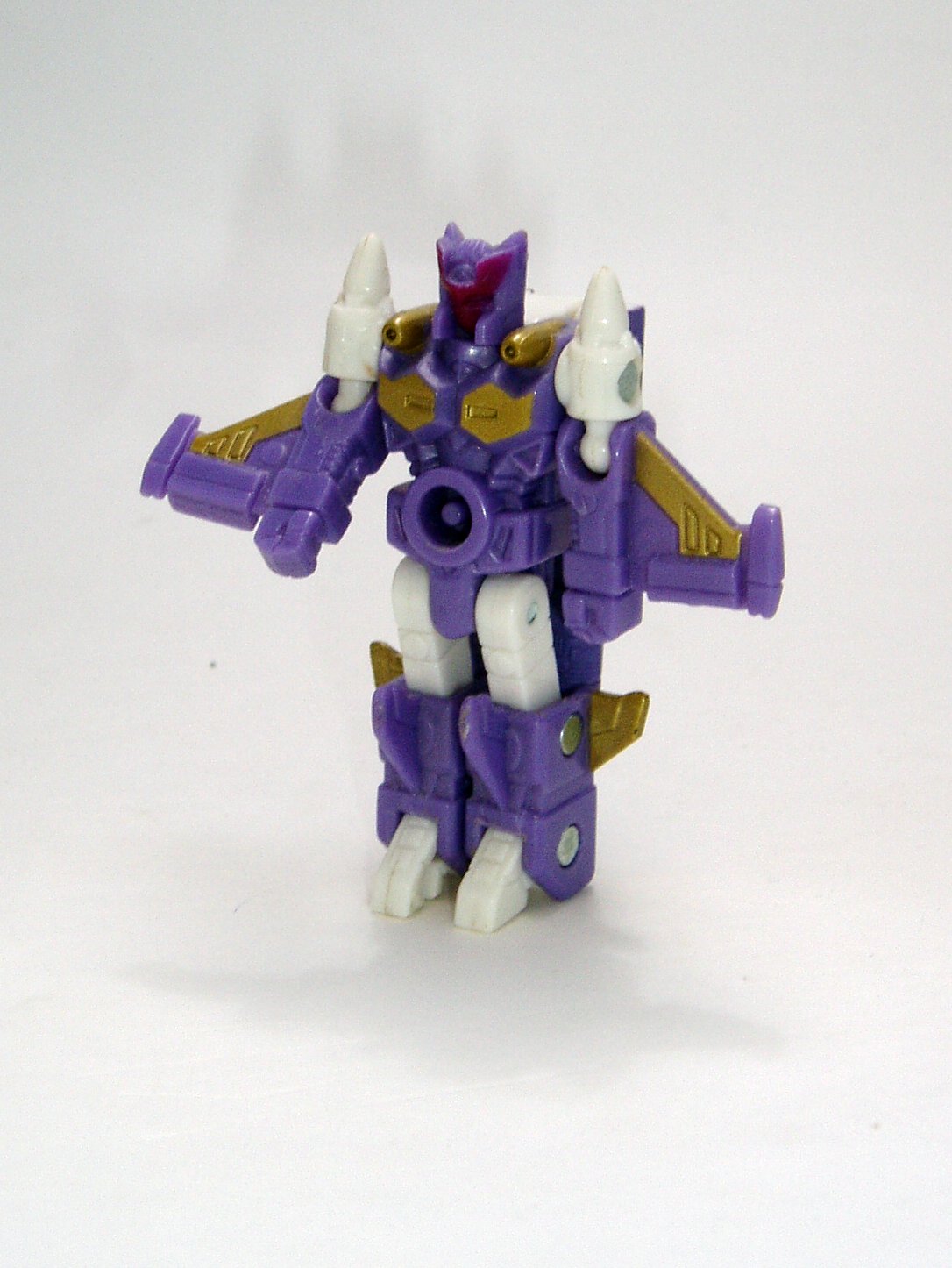 Because Alpha Trion used the Vector Prime mold, he comes with a little friend, who was given the name "Beta Maxx" (a reference to the old videotape competitor to VHS). Beta Maxx has never, to this day, appeared in any fiction whatsoever (unless you count the bio page Fun Publications created for the character), so I'll not say anything more about him except to give this link to his alternate mode in case you're interested.

Of course, the true oddity about this Alpha Trion is that he was ultimately revealed in the Transformers Collectors Club fiction to be the evil Alpha Trion from the Shattered Glass universe! There is some debate about whether or not this was the intention for this toy from the start, but I find the idea that Fun Publications had planned out the story for this Alpha Trion toy so far in advance doubtful. It seems much more likely to me that, some time after BotCon 2007, the writers had need of an evil Alpha Trion character, and having just released this toy, it was a natural choice. 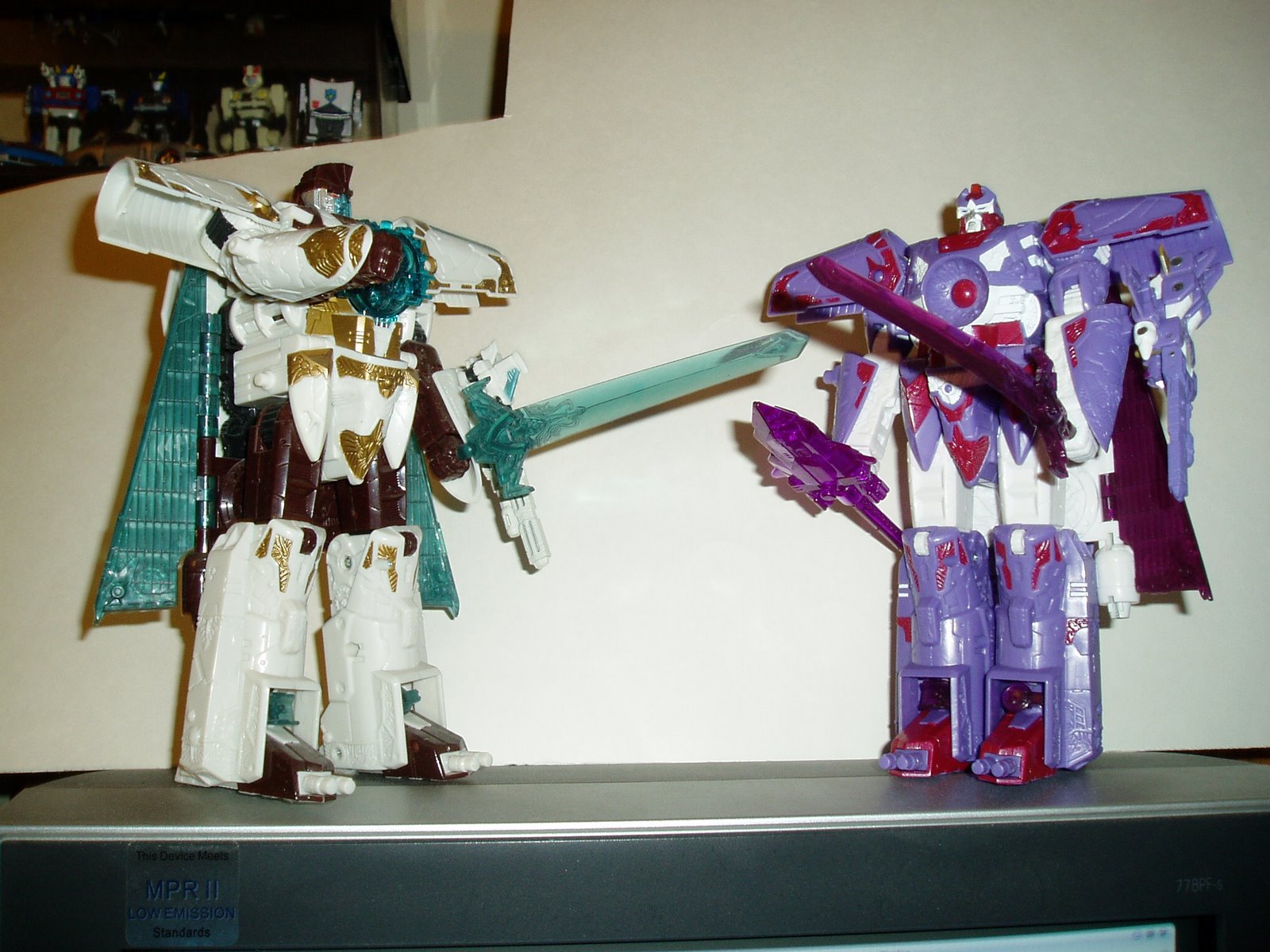 I have no knowledge of whether or not this mold truly will be used for one of the "Knights" at BotCon 2014, but the mold, especially with its built-in sword (seen here on both Vector Prime and Alpha Trion, who also wields a spear from the official 2004 convention), seems a natural choice. We'll find out for sure in a few weeks!
Posted by Mark Baker-Wright at 11:00 AM No comments:

May the Fourth Be With You - Transformers Crossovers Yoda

It's May 4th, also known to many around the world as "Star Wars Day," or, as my friends often hear it (if only through me), "Bad Pun Day." As I'm writing this, the opening crawl to Episode III: Revenge of the Sith is scrolling up my television screen. Time to pull out another Transformers feature from the now-defunct "Crossovers" line. Having already featured Darth Vader (as the Death Star) and Han Solo & Chewbacca (as the Millennium Falcon), it's time to showcase Yoda. 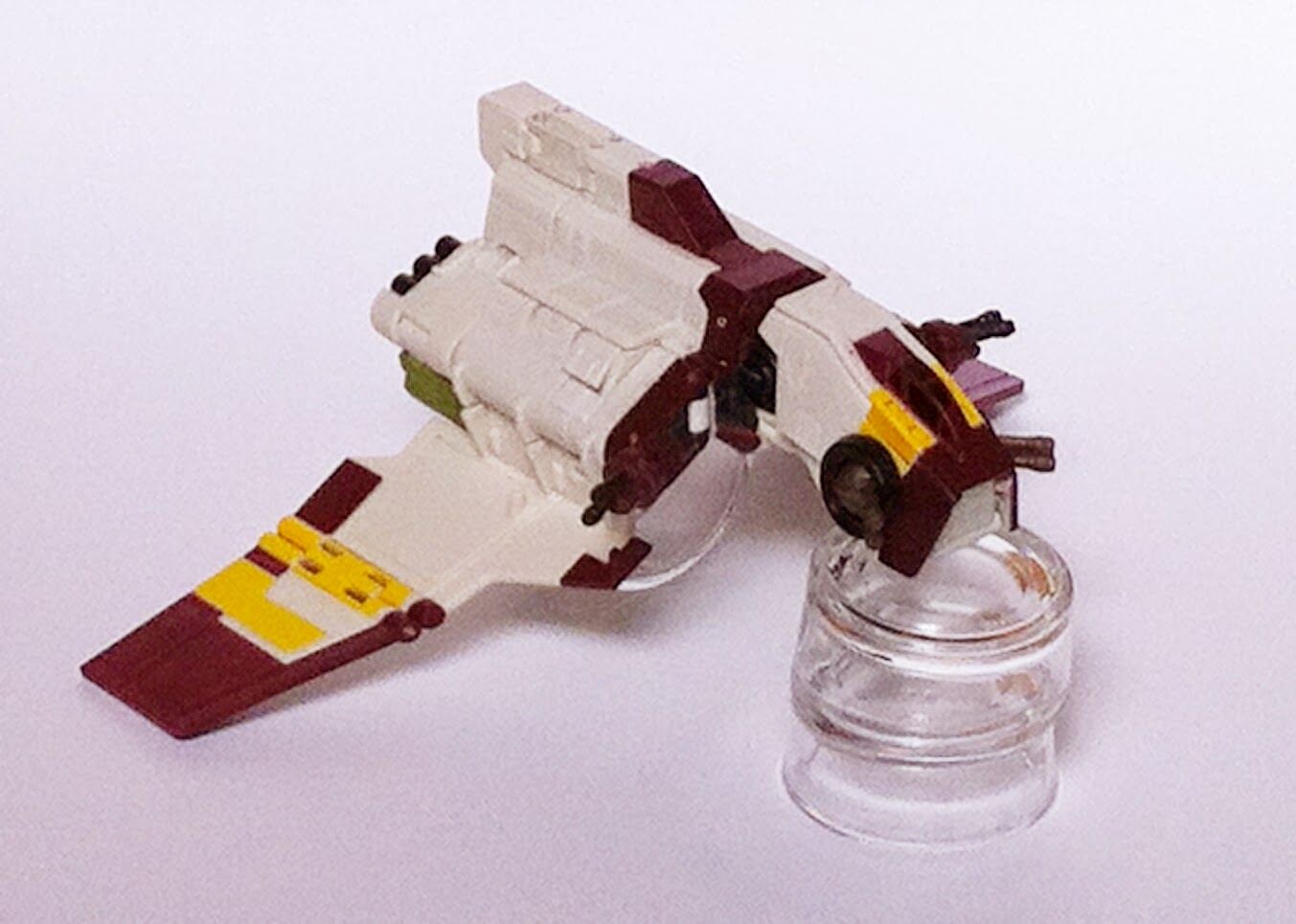 With other figures in the Star Wars Crossovers line, an effort was made to connect each character with a vehicle associated with it. This was no doubt a bit of a challenge for Yoda, who continues to be most closely associated with the swamp world of Dagobah, and perhaps secondarily to having been on the Jedi Council during the Clone Wars. He's not particularly known for being a pilot. Ultimately, the decision was made to have Yoda turn into a Republic Attack Shuttle, a vehicle used with some frequency in the Clone Wars CGI cartoon. 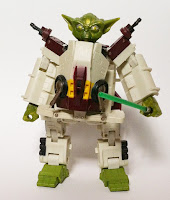 In robot mode, Yoda wields a lightsaber, the traditional weapon of the Jedi. Whereas older Star Wars Transformers figures (including both Vader and the Falcon duo) included small figures that would be carried within the robot/vehicle, this was no longer the case by the time the Yoda figure was made. Thus it is perhaps a bit more ambiguous whether this figure is intended to represent a mecha piloted by Yoda, or if this is meant to be Yoda himself. Of course, it's safe to say that all of the Star Wars Transformers would have to represent some alternative universe to the "galaxy far, far away" as seen in the movies. It would be difficult to imagine these transforming robots as tools only ever used off-screen, if they are assumed to exist at all.

One final note regarding Yoda. Whereas my other Star Wars Transformers represent characters and vehicles from the classic trilogy of the late '70s and early '80s, this Yoda figure is more properly associated with the prequel trilogy. As a matter of fact, most of the Star Wars Transformers are characters and vehicles from the Clone Wars era, almost certainly due to the fact that, between the more recent movies and the Clone Wars cartoon, this is the era more children of today identify with most readily. It is almost certainly a reflection on my own age that my collection has focused on what is actually a specific minority from within everything that was available from the line.
Posted by Mark Baker-Wright at 4:00 PM No comments: