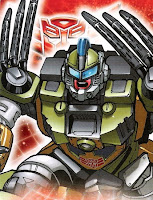 Not all of the figures in the "Wings of Honor" box set were homages to existing characters. Landshark is an all-new character. But, for those of you familiar with old Saturday Night Live sketches, you might guess that the name "Landshark" homages something else entirely. Rik Alvarez, who works behind the scenes with Hasbro and Fun Publications, wanted to do a character that homages comedian Chevy Chase, and as a result gave us a character with one of the most unusual origins ever seen in the Transformers franchise's 25-year history. 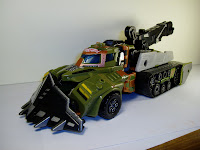 A repaint of Energon Landmine, Landshark is easily the largest toy in the box set. It doesn't exactly resemble any real-life Earth vehicle, but has elements of several different construction and/or demolition vehicles combined into one, with a missile launcher thrown in for good measure. 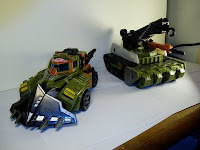 The vehicle actually splits apart into two components: a truck cab with plow and a tracked crane/missile vehicle. This tracked half can itself transform into a platform while the cab changes into Landshark's basic robot mode. 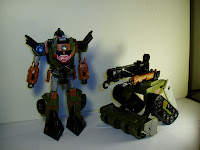 Being a heroic Autobot, one can safely assume that Landshark doesn't devour unsuspecting women like his SNL namesake (Decepticons might not be quite so safe...), but the character is seen in the "Wings of Honor" comic book (which comes with the box set) as having certain elements of Chevy Chase's trademark humor and his penchant for not always respecting authority. Since the Fun Publications folks promised us that they've got plans for more "Elite Guard" stories, we can perhaps expect to see this personality played up even more in the future.

Robot and platform can combine again to form Landshark's "brute mode" (borrowing the term from Landmine. I haven't actually seen it used anywhere for Landshark). I have to apologize for the dark picture, especially as his head is hard to see properly. The missile launcher and that crane really get in the way! The more prominent feature of this mode, however, the claws, are still pretty easy to see. According to Landshark's bio, these things enable him to "cling onto or climb up almost any structure." Does that make Landshark Spider-Man, too? I don't think Chevy Chase has ever played him!
Posted by Mark Baker-Wright at 12:00 AM