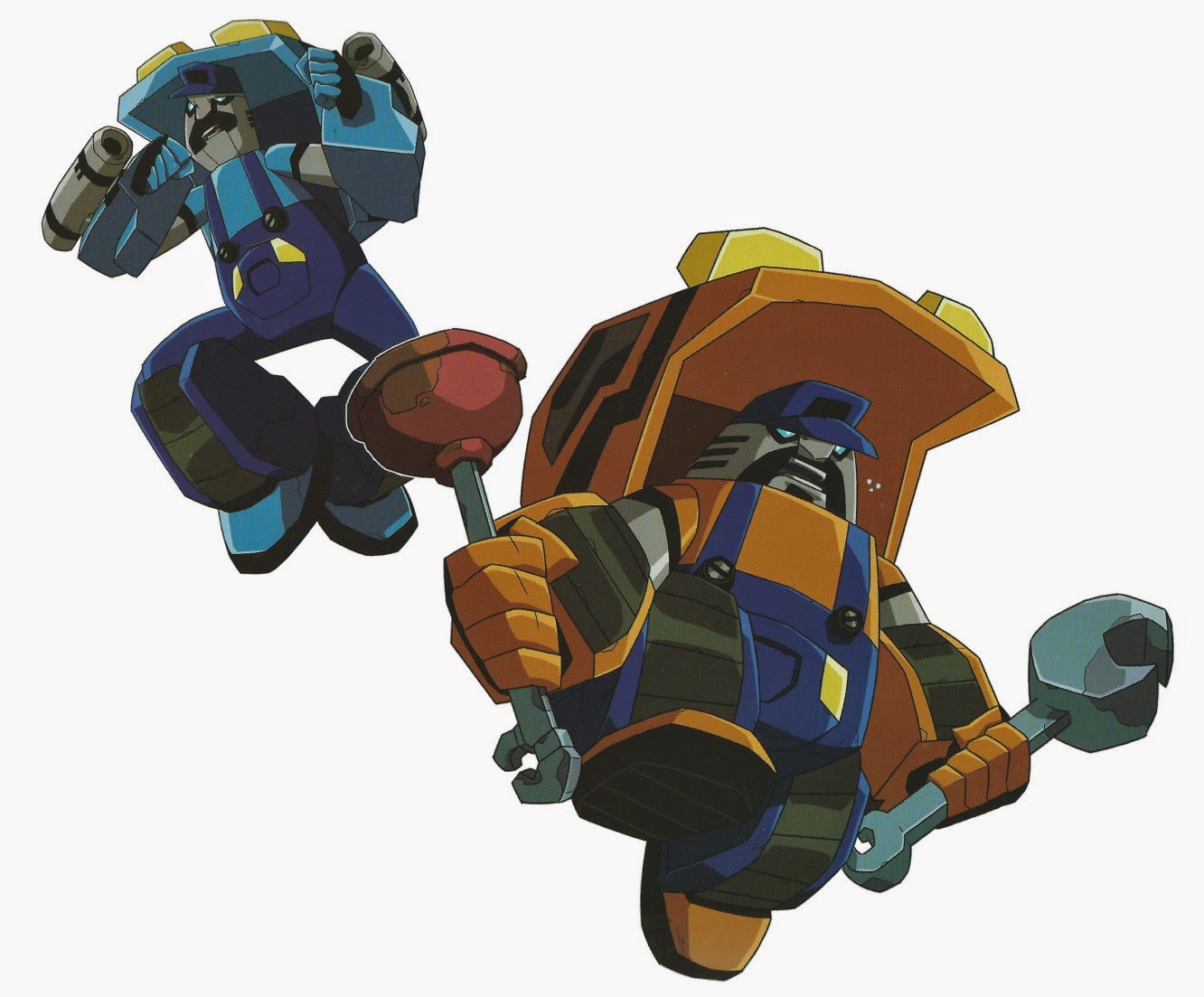 Transformers: Animated, which ran from December 2007 to mid-2009, was undeniably a visual departure from all of the various iterations of the Transformers franchise that have come before it and since. "Stylized" is perhaps the best way to explain the aesthetic. If you know about Transformers at all, and have any familiarity with Animated, then you will no doubt be able to identify any piece of the Animated cartoon, or its attendant merchandise, at a glance. These two guys are particularly unusual, however, in that they are not, strictly speaking, Animated toys. They're not even made by Hasbro (or any of the companies that do official Transformers in other countries). They are however, not only intended to emulate the distinctive Animated design aesthetic, but in fact are expressly using designs created by Animated lead character designer Derrick J. Wyatt. While Mech Ideas, the company that made them, is skating the edge of legality on several levels, they do at least try to avoid an obvious trademarking violation by calling their toys "Bluster" and "Trench." Let's get naming conventions out of the way, first. Bluster is the name of the orange robot, intended to represent Animated Huffer, while Trench is the blue robot, intended to represent Animated Pipes. The designs first appeared on an April Fool's edition of Wyatt's blog, A Delightful Tedium. Rather than a straight-out prank, Wyatt decided to do something in the way of a teaser. Some of the characters shown in the April Fool's Day image (here's a closer look) were set to appear in the then-forthcoming third (and, as it turned out, final) season of the cartoon. By the time it was all said and done, Animated Huffer did, in fact, appear in the background of a crowd scene or two. Pipes did not. However, Pipes did eventually gain "official" status by appearing in other official materials, including scenes produced by Fun Publications for the BotCon 2011 comic. 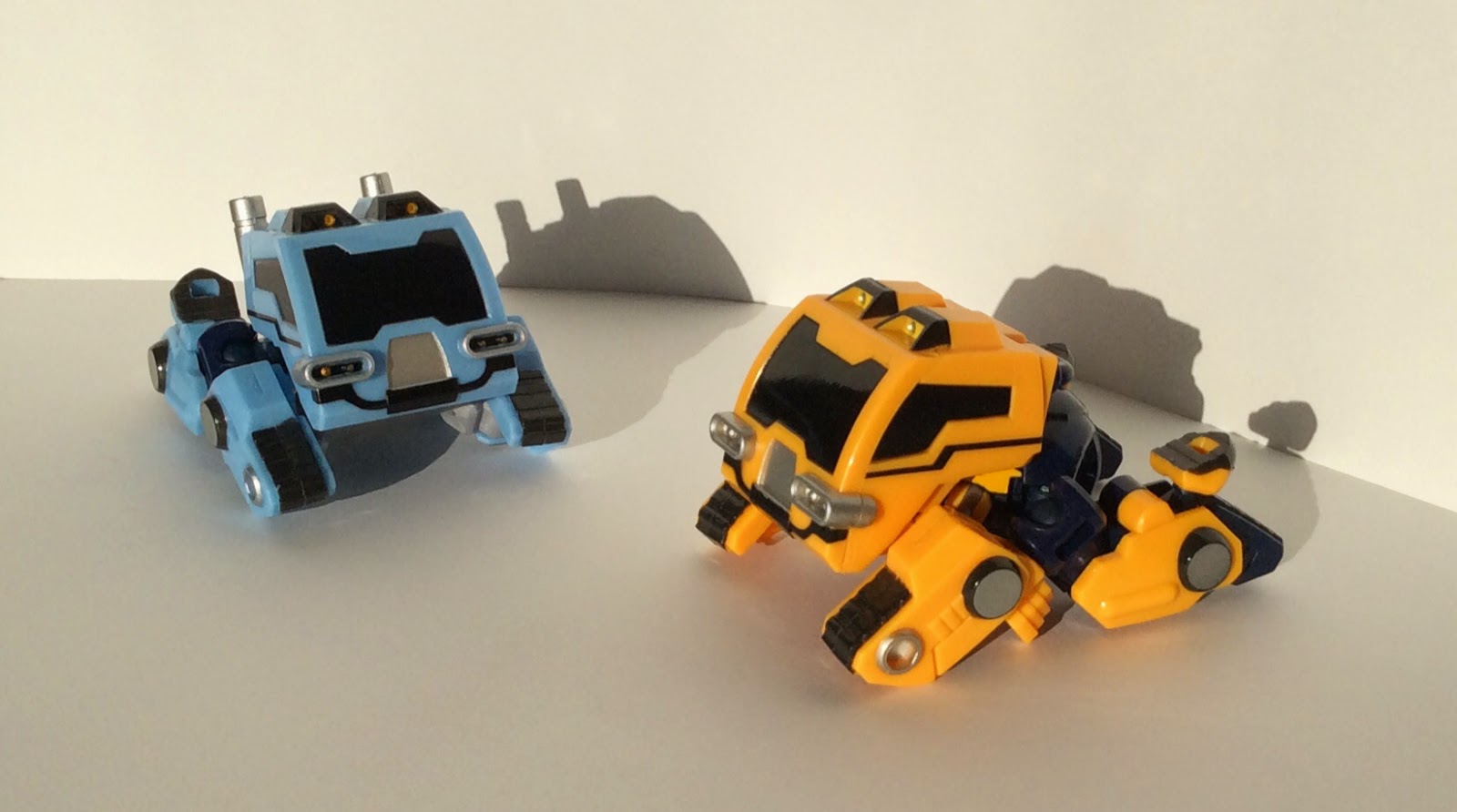 Even the alternate modes designed for these guys have an official basis, appearing in the second volume of Jim Sorenson and Bill Forster's Transformers: Animated: The AllSpark Almanac. The basic concept, itself, was seen in other Cybertronian modes used in the series, such as those of Ratchet and Ironhide, and later adopted by BotCon 2011 for Fisitron (aka Ironfist) and the Autotroopers. That said, I find this mode kind of difficult to maintain. Nothing really pegs in securely, so I don't anticipate I'll actually transform them much. 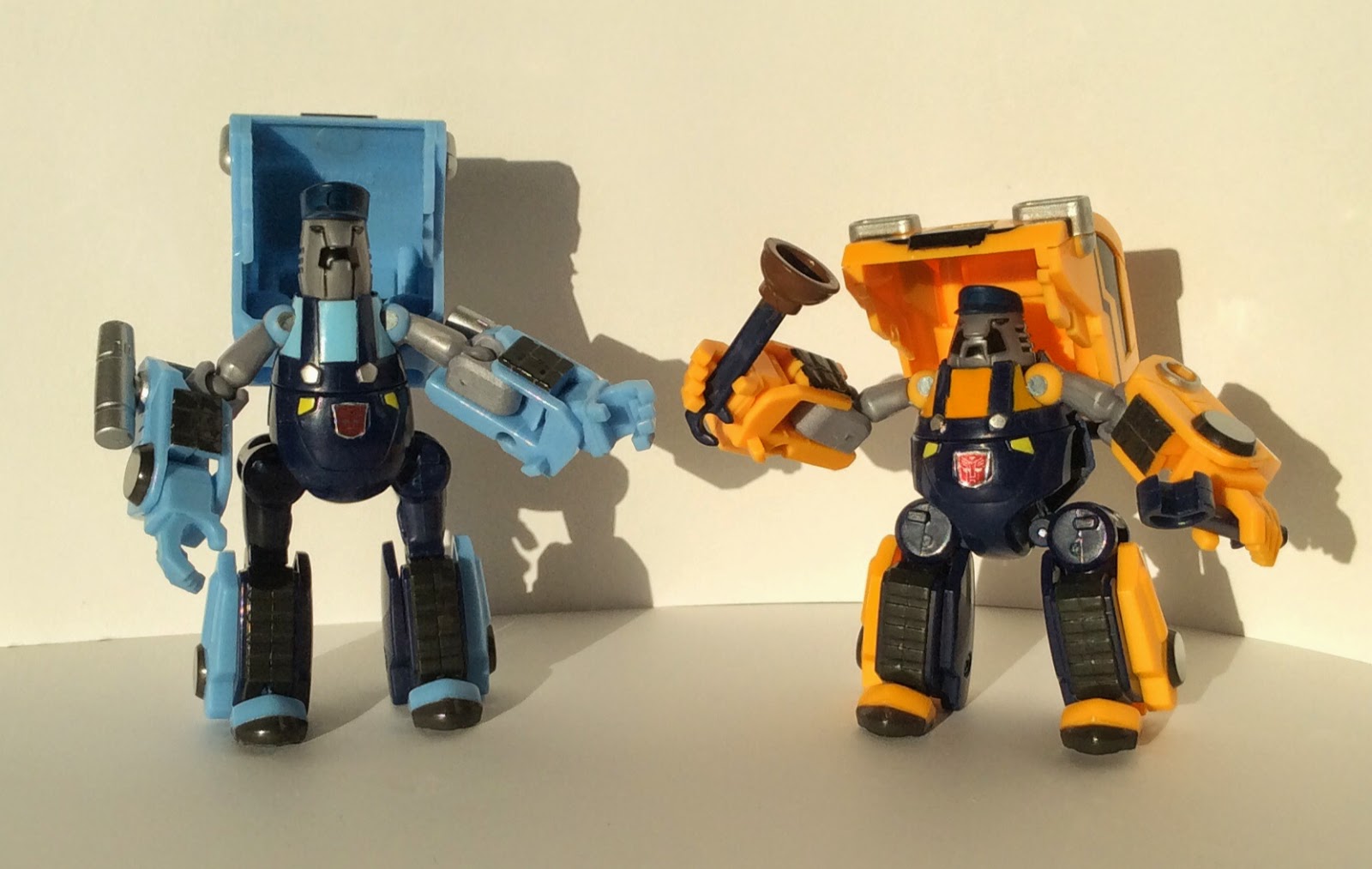 Although these toys are completely unofficial, and thus did not come with Autobot faction symbols, the folks at Mech Ideas put little indentations on the robot's bellies at just the right place where such symbols would have gone (compare this image with the April Fool's image by Derrick J. Wyatt again), so thanks to Reprolabels, I've gone ahead and completed the look.

Animated Huffer and Pipes were, of course, patterned after the Generation One toys of the same names, but these aren't the only characters the Animated versions were designed to pay homage to. Huffer and Pipes were designed by Wyatt to resemble iconic video game characters Mario and Luigi, respectively. Naturally, I couldn't resist pulling out a few Mario-themed toys to pose with these guys. After all, toys are for having fun with!
Posted by Mark Baker-Wright at 3:00 PM No comments: 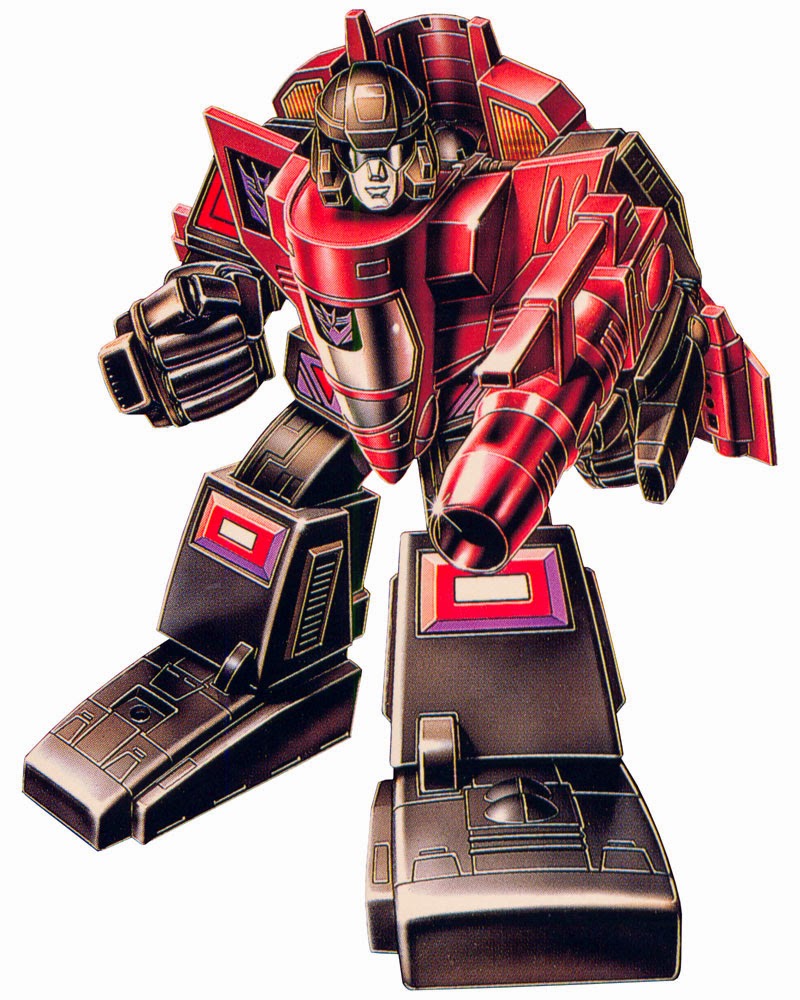 For all of the nostalgia inherent in discussing Transformers toys from the original line of the 1980s, there are certain criticisms that come up fairly frequently, especially when these old toys are compared to their modern counterparts. One of the most common of these criticisms is a lack of articulation. An inability to pose the robot mode into multiple stances is seen as a serious failing these days, and it is not uncommon to hear certain toys referred to as "bricks." Even in the 1980s, some toys were guilty of this flaw more than others. The Duocons, represented here by Flywheels, are perhaps the worst offenders.

The basic gimmick of the Duocons, introduced in 1987, is that they are robots who split into two distinct vehicles, neither of which is a separate robot on its own. Later fiction would try to explain the concept as Shockwave's failed early experiments to create robots with more than one vehicle form, but it's worth noting that the Triple Changers existed before the Duocons in terms of actual toys. 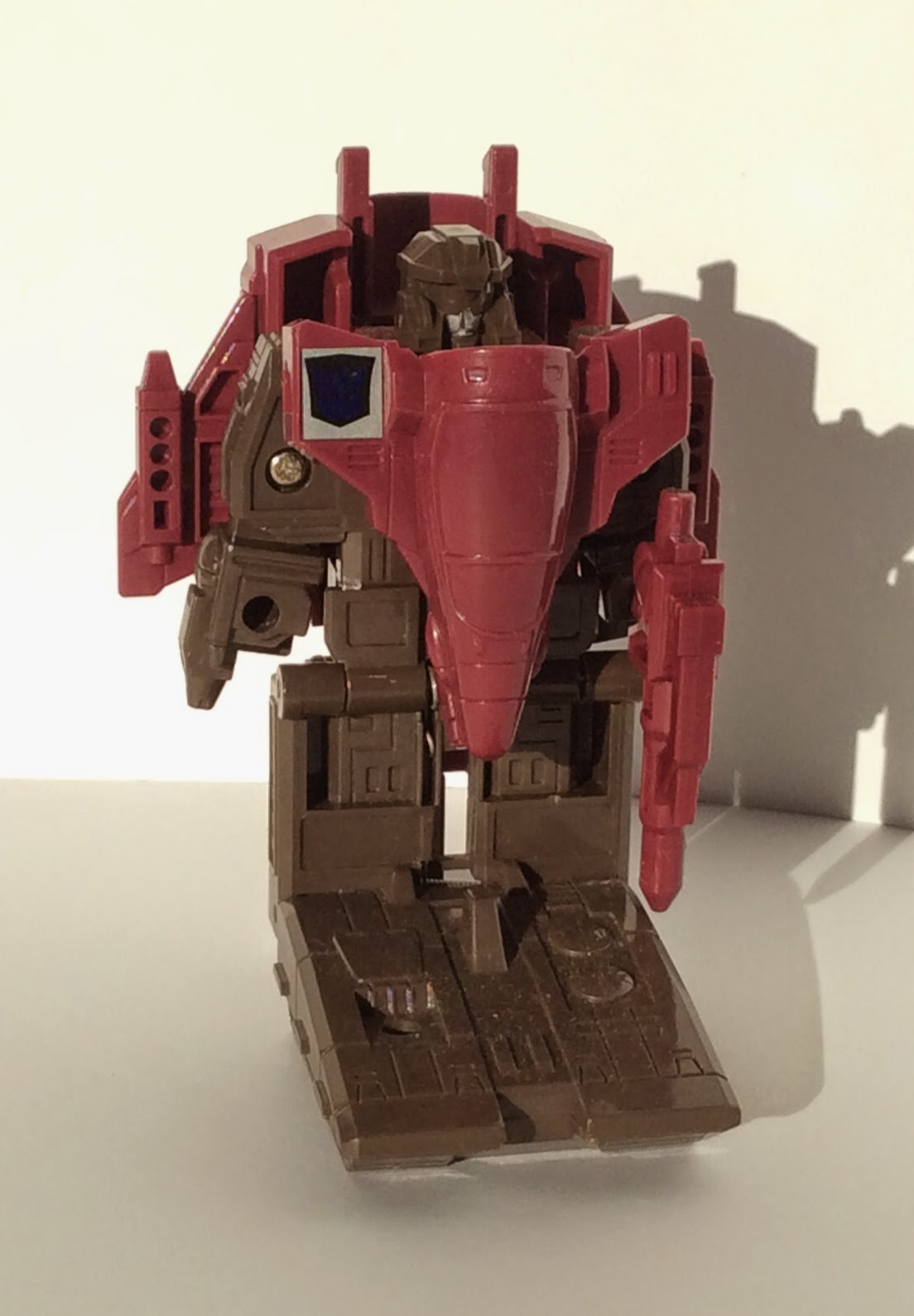 The Duocons are transformed by fitting the air vehicle on top of the ground vehicle by lining up slots and tabs, pressing the two together should then cause the toy to pop up into its combined robot mode. The result is a robot without discernible feet (not unlike the "Minibots" of a couple of years previously) and arms that cannot even be raised to point the included weapon forward. Flywheels actually fares slightly better here than fellow Duocon Battletrap. You can raise Flywheels' arms slightly to the sides. Battletrap's arms have no mobility whatsoever.

While it's never been proven, it's probable that the names of Battletrap and Flywheels were actually swapped at some point during the production process. Flywheels actually has no wheels on either of its vehicle components, and the tank is a far more "battle"-ready vehicle than Battletrap's camper-truck ground component (while I might say the same about Flywheel's jet versus Battletrap's helicopter, that's far less of a slam dunk, as the Apache has been used by the military for many, many years). It would hardly be the first time such a swap is likely to have happened with two generally-similar Transformers toys.
Posted by Mark Baker-Wright at 11:15 AM No comments: