For this episode of Not Your Father's Autobot, we're discussing Transformers: Generation 2 issue #5, cover dated March, 1994. This issue can be found reprinted via the Transformers: Dark Designs paperback, which may be purchased via Amazon. Listeners may also wish to try to find a copy of either the collected paperback or the issue itself via eBay (purchases through these links do not support the podcast in any way).
Read more »
Posted by Mark Baker-Wright at 8:00 AM No comments: 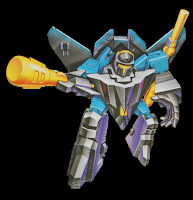 In 1995, the last year of Generation 2 in America, not only was the "Generation 2" heading quietly dropped, but in a clear attempt to get additional product out at a minimum cost, almost every mold released during the year was either used twice, or had clear plans to do so that simply fell through when the entire line was cancelled to make way for Beast Wars. This kind of mold reuse is common today, but despite the truth that some mold reuse had been done since the very first Transformers toys in 1984, this was a significant increase compared to then-recent years. Perhaps as part of an attempt to persuade kids (or parents) to buy molds that had already been used just a few months previously, the reuses were all given the names of classic Transformers characters from Generation 1. Such is the case with today's featured figure, Cyberjet Air Raid.
Read more »
Posted by Mark Baker-Wright at 10:00 AM No comments: 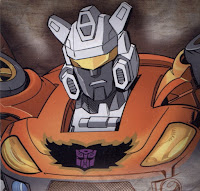 Even among Shattered Glass characters, Stepper's story is more complicated than most, both in the real world and in terms of the fictional character himself. Let's start with the real world story....

Back in 2008, BotCon introduced the concept of "Shattered Glass," a mirror-universe concept where the Autobots were evil and the Decepticons were good. The attendee incentive figure for that year was a Shattered Glass Ricochet toy, which was (appropriately enough) a repaint of the Shattered Glass Jazz toy which was a part of that convention's box set. As longtime fans know, "Ricochet" was the American name given to Stepper, the previously-Japanese only black repaint of G1 Jazz as a new Targetmaster character, when that toy was finally re-released and made available to American stores in the early 2000s. Although BotCon 2008 Ricochet was not yet a Targetmaster, he was clearly intended to be the Shattered Glass version of the same character, and the missing Targetmaster was given to him early on when Shattered Glass prose stories began to be made available to club members.

Read more »
Posted by Mark Baker-Wright at 10:30 AM No comments: