Members of the Official Transformers Collectors' Club were surprised a couple of months ago to learn that the Combaticons, a well-known team of bad guys that featured in the original 1980's Transformers cartoon, were being featured in the current "Wings of Honor"-based storyline... as members of the Autobot Elite Guard!  A new prose story featuring them just came out a couple of days ago, prompting me to pull out the only of one of these characters currently represented by a toy (Decepticon symbol on the toy notwithstanding): Universe Onslaught.

In 2008, the second toyline to carry the Universe name featured a number of toys representing characters from the Generation One era of the Transformers franchise (in fact, many people often refer to such toys as "Classics 2.0"), and Onslaught was one of the more heavily-promoted examples of this in the early part of that line.  The original Onslaught is probably best known for being a part of the combiner robot, Bruticus.  In fact, the original Combaticon molds have probably been reused more times than any other Generation One combiner team, making the Bruticus form (in whatever name it was given for a particular line) extremely well-known.  Since it was quickly discovered that this new version of the character would not be combining with the rest of his team (none of whom were made available in a new form at this time, anyway) to create a new version of Bruticus, many fans were understandably disappointed.  Indeed, back in the 1980's, being able to combine was pretty much the "whole point" of these "special teams" toys (as they were often called in the UK), and few of the individual robots in those teams ever had a chance to shine on their own.  This version of Onslaught gives the character a chance to do just that.

The vehicle mode bears little resemblance to Onslaught's original anti-aircraft truck form, aside from perhaps having a similar color scheme, but it really doesn't matter.  Transform this toy into robot mode and take a look at the face!  This is undeniably the same character.  Being an "ultra"-sized toy, Onslaught has some electronic sounds and lights incorporated into him, but they're really nothing special.  The flip-out weapon on Onslaught's right arm is kind of cool, as is the shield that can be placed on the left arm.  The TFWiki points out that this Onslaught stands about as tall as the original Bruticus did.  It's a great example of how a character may be updated in a way that remains true to the character essentials while also being almost entirely new.

Even so, it's still a bit disappointing that Hasbro seems to have abandoned the idea of these guys being a part of a team that combined into a larger robot.  Those were always cool. :(
Posted by Mark Baker-Wright at 12:00 AM No comments: 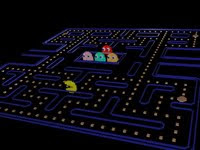 Okay, I'm a bit embarrassed.  I didn't remember that Pac-Man is turning 30 this year!  I used to be a "Pac-Maniac" when I was a kid, but I guess I'm getting old.  It took Google to inform me of this fact by dedicating their daily "doodle" to the anniversary today (According to Wikipedia, the game was actually introduced in Japan on May 22nd, 1980, but since I guess that, as of less than an hour ago, it's already the 22nd in Japan, I guess today counts...).  What's more, you can actually play the game in this doodle!  Ridiculously cool!

(Thanks to Google for posting a permanent link!)
Posted by Mark Baker-Wright at 9:00 AM No comments:

I really want to write something deeply profound and insightful.  There's certainly enough going on in the world that I can comment about.  Problem is, I haven't had enough time in front of the computer when I haven't been doing something else to collect it all into something worthwhile.  Rather than force the issue just because I usually post on Friday, I'm going to use the limited time I have tonight to fix this Shockwave toy.  This project is way overdue.  It hasn't been in one piece since I wrote that article a couple of years ago!
Posted by Mark Baker-Wright at 12:00 AM No comments:

I've commented before that by the middle of the original Generation One toyline's run, it seemed like every Transformers toy had to have some kind of gimmick beyond just the ability to transform.  Fastlane and Cloudraker represent a gimmick that I'm actually a bit surprised has never been revisited in the years since: these two characters are "clones."  Looking at the box art immediately to the left, this may not be immediately apparent.  But if one considers how unusual it is to have box art represent the vehicle mode of a toy, one can probably guess at what's going on....

Read more »
Posted by Mark Baker-Wright at 12:00 AM No comments: 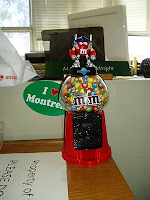 Last year, as Transformers: Revenge of the Fallen was coming out in movie theaters, the folks who make M&M's did a promotion alongside Target.  Buy five bags of M&M's from Target, send in the receipt, and get this M&M's dispenser with the red M&M character dressed up as movie Optimus Prime on top for free (you didn't even have to pay for shipping!).  I seem to recall a yellow version, with the yellow M&M character dressed up as movie Bumblebee, which one could buy at Toys R Us at about the same time for the ridiculous price of $15, but since you could actually buy five bags of M&M's for less than that (I paid about $2.50 each bag.  Sales are great!), I figure this was the better deal no matter how you cut it!
Posted by Mark Baker-Wright at 12:00 AM 1 comment: