Well, since Ratchet is ineligible for support for the Hall of Fame (the non-Marvel-ness of the Ratchet likely to actually be honored notwithstanding), let's have some fun.  Vote for this guy instead!

And, for those who've missed it, you can have more fun with Action Master Thundercracker here, and read my efforts to get a toy produced here and here.
Posted by Mark Baker-Wright at 9:45 AM No comments:

Because it's that time of year again.  (Actually, I'm told that Ratchet is already being inducted this year, without the need for a vote, but I have doubts that they recognize that the Marvel version isn't the same as, say the current version seen in Transformers: Prime, let alone the old cartoon version)

Posted by Mark Baker-Wright at 12:00 PM No comments: 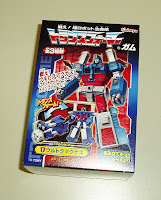 A couple of weeks ago, the folks at Fun Publications finally unveiled MCAX.com.  This site has been promised to members of the official Transformers club (and others) for several years now, so it's good to finally see the promise become a reality.  Basically, MCAX.com is intended to be an alternative to eBay.  Members are able to post items for sale without having to worry about those annoying fees that eBay charges (unless you choose to utilize certain special features).  I have doubts that MCAX.com can ever develop a sufficiently large userbase to be of much value to most fans.  If there aren't a lot of people selling, there's not a whole lot to buy.  To their credit, the site is free to everyone (not just club members) until Labor Day, so head on over there to see if something interests you.

My first purchase from MCAX.com was a model kit of Generation One Ultra Magnus produced by a company named Kabaya.  I've been reading about these things for several years now, but I've never actually bought one before.  Basically, they're little model kits sold with a piece of chewing gum (that's the packet to the left) so they can be sold in grocery stores.  The Asian grocery stores here in Southern California often have lots of these kits from Kabaya, from all sorts of different franchises, although I've never seen a Transformers kit "in the wild," but only through online vendors.  My model-making skills are decidedly rusty (the last time I put them to use being at the BotCon 2009 Customizing Class), but strangely enough, none of the reviews of these figures (and there are actually quite a few of them out there over the past 25+ years) seem to go into any detail about the construction of the models, so I'll do what I can here. 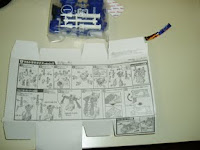 In a nicely efficient use of space, the assembly instructions are printed on the inside of the box itself (which itself has a perforation along one side to ensure you open it correctly).  Although the instructions are in Japanese, the images are reasonably clear, and the numbers are the same Arabic numerals we westerners are familiar with, so I didn't really have much trouble following along.  The instructions do suggest putting the stickers in place while you assemble the figure, but I held off on that at first.  I'll explain why in a bit. 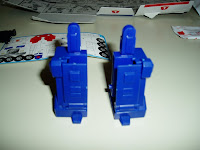 As with any model kit, you put the pieces together in sections.  Here's a somewhat fuzzy (sorry!) picture of the legs.  The arms and torso were each their own individual sections, as well. The set doesn't really require any glue, and in fact I would recommend against using any.  This model is, in fact, a transforming toy much like the "real" Transformers.  Think of it as a smaller-scale and simplified version of the original, and you're not too far off from the idea.  To use glue on the wrong piece would be disaster! 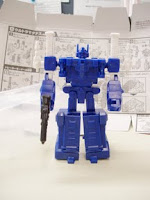 In the case of this Ultra Magnus model (Kabaya did another one back in the mid-80's), the assembled figure is almost entirely blue (the only exceptions are for the black rifle and small smokestacks, and the white arms and missile launchers).  This is why the stickers were provided, but I can't tell you how tempted I was to just paint it up instead, despite my previously stated lack of painting skills.  I hate stickers that much!  Here's a shot of the unstickered-vehicle mode. 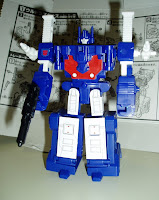 Ultimately, the need to go ahead with the original intention won out, and so here's Ultra Magnus with the absurd number of stickers applied.  This is really pretty ridiculous.  While I grant that one shouldn't expect all the pieces to be molded in all the colors of the original, part of the problem here is that the stickers are going over sections that have molded detail on them.  If I was putting those big white stickers over smooth legs, for example, it wouldn't be nearly as much of a problem as what we have here.  I'll truly be shocked if that sticker on Ultra Magnus' face stays on for more than a few months, and just look at the cab in the picture below!

Even so, this was a fun little afternoon project, and worth the money I paid to get it.  I doubt I'd ever do a lot of these (unless they do start showing up in grocery stores that I can actually go to here in Southern California, at which point I don't have to pay for shipping), but it makes for a somewhat unique addition to the collection.  And even the chewing gum wasn't at all bad!
Posted by Mark Baker-Wright at 12:00 AM 1 comment:

While chatting with my sister online, we got to talking about yesterday's St. Patrick's Day holiday.  The love of all things Irish commonly associated with that day got us to thinking about one of our favorite movies from our childhood, The Happiest Millionaire.  As I said when I mentioned that movie a few years back, we really like the stuff featuring Tommy Steele, and can actually skip most of the actual plot that pads the middle of the movie.  But an early song featuring Steele from the movie, "I'll Always Be Irish," seemed especially appropriate.  You can find lyrics to the actual song here, but we decided to go in a different direction.  The parody that follows was written as a collaboration between the two of us.

I'm Not Really Irish
by Mark Baker-Wright and Ruth Wright

One night last week I pined away, at places far and near
All the sights I've never seen and never will, I fear.
I know I'll never see the place, and yet I dream to see,
that land of magic wonderment, that calls so much to me.

I'll always be Irish! Well, actually, I lie!
I'm NOT really Irish, you can poke me in the eye!
Although I can sing Danny Boy, and even sing it well,
If I try an Irish accent it will make you want to yell!

I wish I were Irish, and had that lovely hair.
I wish I were Irish with the passion that lives there!
But since I'm an American, I've gotten used to that,
and I guess I'll have to settle for this t-shirt and a hat.