Probably for as long as there have been toys, there have been people seeking to make the same toy that someone else created, only a bit cheaper. Today, we tend to call such toys "knock offs." Knock offs are usually of inferior quality, and are, at best, of questionable legality. Yet they somehow manage to be rather ubiquitous. This poses a problem for the serious collector, to whom the legitimacy of an item is important, and to whom counterfeits pose a threat to the value of the originals.

So, yes, I own a knock off version of Raiden. Whatever that says about how serious a collector I am is up for debate. For the most part, I'll talk about the original toys, but there should be no confusion here: I do not own the originals, only this counterfeit version, for which I paid far too much in the early 2000s, only to find the same items available just a few months later for five-to-ten dollars for the whole set. If you consider that poetic justice, so be it. 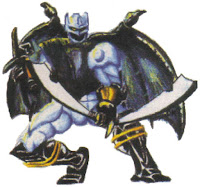 With the recent revelation that now-former BotCon organizer Fun Publications will retain the license to run the official G.I. Joe convention (but not BotCon) for at least two more years, discussion has reignited as to whether Fun Publications' tenure with BotCon has been a net positive or a net negative. While I have tended to come down on the "net positive" side, I have always acknowledged that their tenure with the convention has long been marked by controversy. It is perhaps important to note that, whatever Fun Publications' faults, the end of their time with BotCon marks the end of an unprecedented tenure of stability for the convention, lasting 12 years. The early years of BotCon had their share of controversy, as well, without any guarantees of stability. Indeed, the first three BotCons were each organized by different people, and the difficulties surrounding BotCon 1996 were arguably the worst of them all....

Perhaps the most positive aspect of BotCon 1996 was the exclusive toy that year, a repaint of the first Beast Wars Optimus Primal toy named Onyx Primal. But even Onyx's story is far from serene.