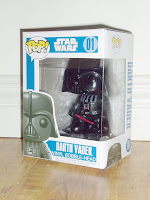 About a month ago, I decided to give Loot Crate a try. For those not familiar with the program, here's the idea: for a nominal fee, you get a box packed with items intended to appeal to geek and gaming culture. The items that will be in the box are not revealed in advance, so there's admittedly a risk involved that you might not get anything that particularly appeals to you. The upside is that there is an opportunity for a little bit of Christmas once a month when the package arrives, and since you know that the items are geared toward geeky interests, if those interests apply to you (and if they don't, why are you reading a nominally Transformers-themed blog?), there's a pretty good chance that you can get some really cool stuff.

The company hasn't even been around for a full year yet, but it has already generated a fair bit of buzz due to people posting videos of each "unboxing," as they show off what's in that month's crate, and the Loot Crate folks themselves have embraced the idea as a way to get free promotion of their service. Me, I'm not really into videos, and don't want to just do the same thing other folks are already doing online already, so I'm looking to just feature one highlighted item from the half-dozen-ish items that arrive in each box, at least for the next few months (after which I will determine whether or not I myself want to continue with the service).

Each month's Loot Crate attempts to group items around some kind of a theme. I gather that the themes are fairly loose, but it's still a cute idea. The theme for March is "Cosmos," and the item I'm highlighting out of the box is the Darth Vader Vinyl Bobble-Head from Funko. I never really knew that Bobbleheads were a thing when I was growing up (the more recent resurgence of their popularity not having started until almost the turn of the millennium), but they date back to at least as early as the 1950's. Nowadays, it's practically a sign that someone (or some character) has "made it" to have a Bobblehead made after their likeness. Certainly, Darth Vader is a prime candidate for such a distinction!

If you're interested in learning more about Loot Crate, you can do so via this link. While exploring, you can also check out videos that other Loot Crate subscribers have posted detailing the boxes they've gotten in a given month. In the meantime, I'm looking forward to next month!
Posted by Mark Baker-Wright at 7:30 PM No comments:

Reactions to the 2013 BotCon Box Set

So, now we know (cue "and knowing is half the battle" response).

Over the past few weeks, fans have been treated to previews of the toys that will be featured in this year's BotCon box set, based off of the old Machine Wars line.

Long-time followers of BotCon will, of course, already know that these five toys won't be the only exclusive toys to come out of BotCon 2013. These are simply the ones that we can order in advance (actually, there will one more toy you can order in advance if you want to this year. For the first time ever, the toy that will be made in the Customizing Class will be available to everyone in an unpainted, but assembled, form. But we won't know what that toy looks like until the convention itself. And, of course, there's also the attendee-only exclusive...). Even so, these revelations have caused plenty of reaction so far on the online boards, and not all of it has been positive.

I am not here seeking to defend Fun Publications (henceforth, "FunPub," for the sake of brevity), although I hope not to denigrate them, either. I myself am particularly disturbed that the character that most needed a remolded head (Megaplex, because pretty much the only thing known about the original Machine Wars version of the character is that he's a Megatron clone, and thus he shared Megatron's head shape) is the one toy that doesn't get such a head. FunPub has explained how this came to pass, and while I still wish that another decision had been made, what's done is done, and the mold being used for Megaplex itself is very appropriate for the character. It just needed the Megatron-y head to finish the homage. That said, to get as many as four of the five figures in the set with new heads is unprecedented!

I do think a lot of the negative response arises from fans holding either of two different, but related, ideas: 1. a misunderstanding of FunPub's intentions (this isn't a reworking of Machine Wars concepts so much as a "second series" of Machine Wars figures), 2. a feeling that a set that purports to be Machine Wars-themed should more closely resemble the original line than what was actually done, regardless of what FunPub's intentions were (although noting that Strika and Obsidian are from Beast Machines is not to be ignored). To the extent that fans have misunderstood, both FunPub and other fans need to do a better job of explaining the reality in ways that people can hear (although this is undoubtedly an uphill battle). To the extent that fans simply think that FunPub should have done something else... well, there's little to be done on that account. Opinions will always differ.

Like many fans, I'm also a bit put off by the ever-increasing prices attached to the set (up $25 from last year, for a set which has one less figure than last year's had), but acknowledge that the prices of toys at retail venues have gone up quite a bit (to use the easiest example, most fans still have a lingering mindset that Deluxe-sized toys should go for about $10, even though that hasn't been true for several years now. The current around-$15 price reflects a huge increase from those levels). That said, I've done calculations for the "retail multiplier" of exclusive toys on the data pages, and these suggest that this set actually is more expensive than last year's, even accounting for retail inflation. This year's price is better compared to the "retail multiplier" a couple of years ago, but considering that I calculated that set as the highest such multiplier of all time, that's not necessarily high praise.

Ultimately, the question comes down to whether or not fans will buy the set regardless of whatever deficiencies it is perceived to have. As long as these sets continue to sell out, neither FunPub nor anyone else has any real reason to change the current pattern.
Posted by Mark Baker-Wright at 6:00 AM No comments: