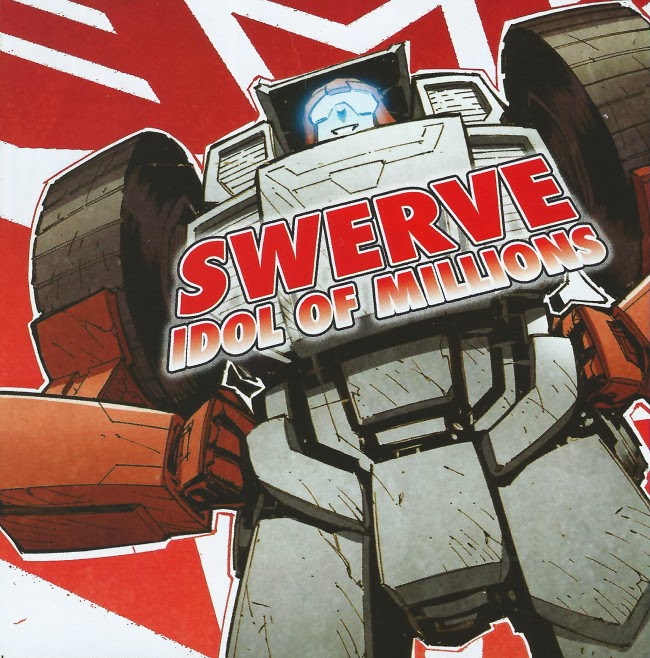 For whatever reason, Transformers characters represented by toys that came out later than the first couple of years of the franchise tend to be ignored. This is in part due to the sheer size of the ever-growing cast of characters. It would be impossible to give such attention to every one of them that every one of them would be well-known and popular. Still, there are those that rise to the surface. Spurred on by a distinctive characterization in some form of media or another (but, in my experience, usually a comic book), characters connected to otherwise-forgotten toys suddenly become incredibly popular. So it is with Swerve, the second (and final) "honorable mention" of the Thunderous Thirty.

Granted, the "Idol of Millions" bit is intentionally over-the-top. In fact, Swerve is actually very un-popular within the fiction itself (most prominently in IDW's current More than Meets the Eye ongoing comic). He's an over-talkative pest who seems to have a knack for butting in wherever he's not wanted, and if he happens to have a weapon in his hands, he becomes a threat to everyone around him, including himself. But if we're talking about fans in the real world? "Idol of Millions" may not be so out of place. Far from being irritating, fans have found Swerve's foibles to be extremely endearing.

Swerve's original toy isn't terribly notable, being a remold of Gears. Although it has been reissued in Japan in the past few years, it was just one of a set of five figures, and can't really be said to stand out among even that comparatively small number. The name has been reused a number of times, usually on remolds, but most of those toys either aren't of the Generation One character, or are at best questionably so, bearing little resemblance (except perhaps for the head) to the character that IDW has since propelled to "favorite" status. 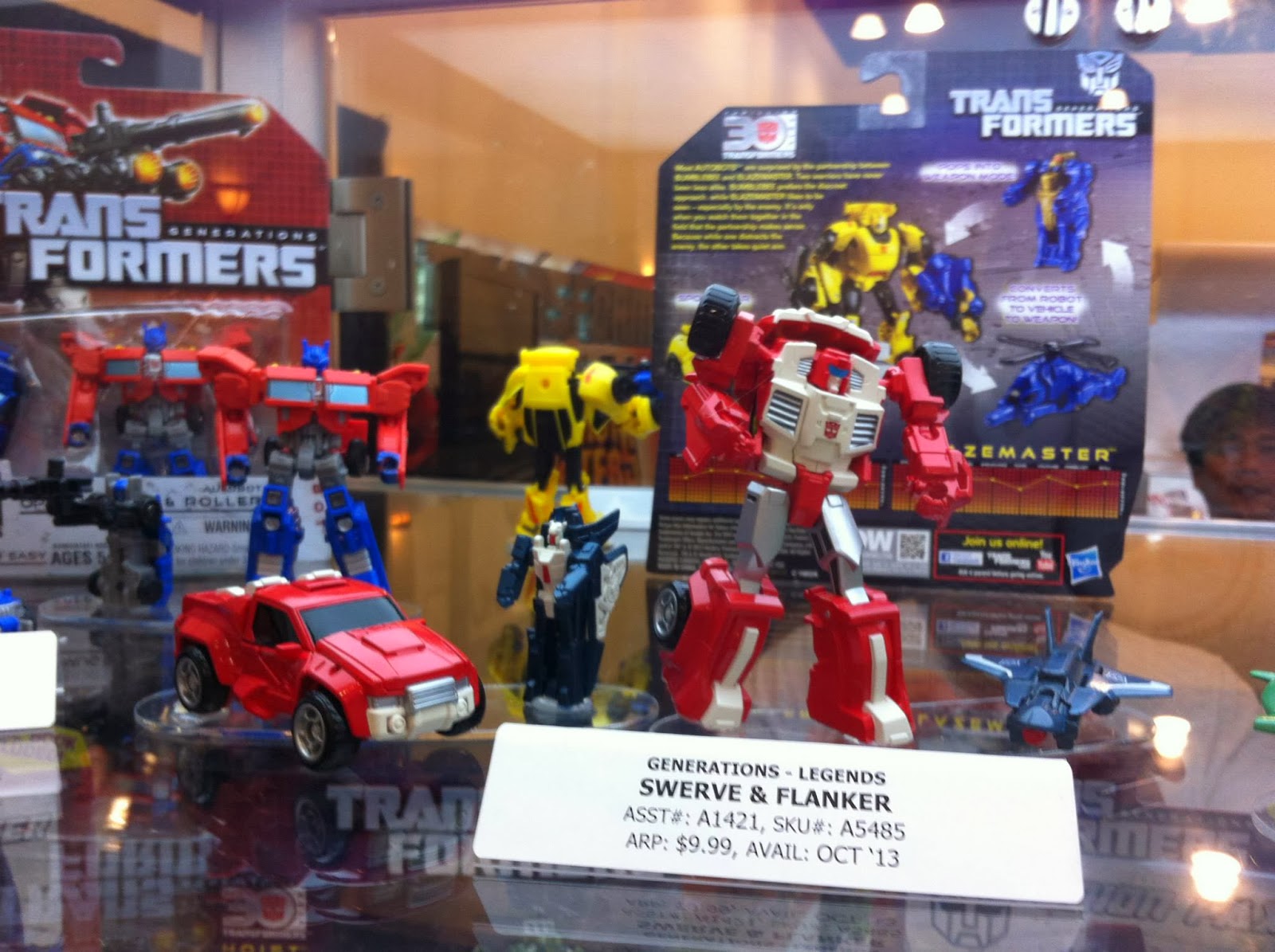 Back at BotCon 2013, Hasbro announced that a new version of Swerve would be released (and there was great rejoicing!), but the promised "Oct '13" release date has long-since come and gone, and Swerve is not yet available. Fans have been promised at this past week's Toy Fair that Swerve has not been cancelled, but only time will tell when the toy will finally come out, and just how easy (or difficult) it will be to get. I'm certainly hoping not to have a repeat of what happened a few years ago.
Posted by Mark Baker-Wright at 10:00 AM No comments: 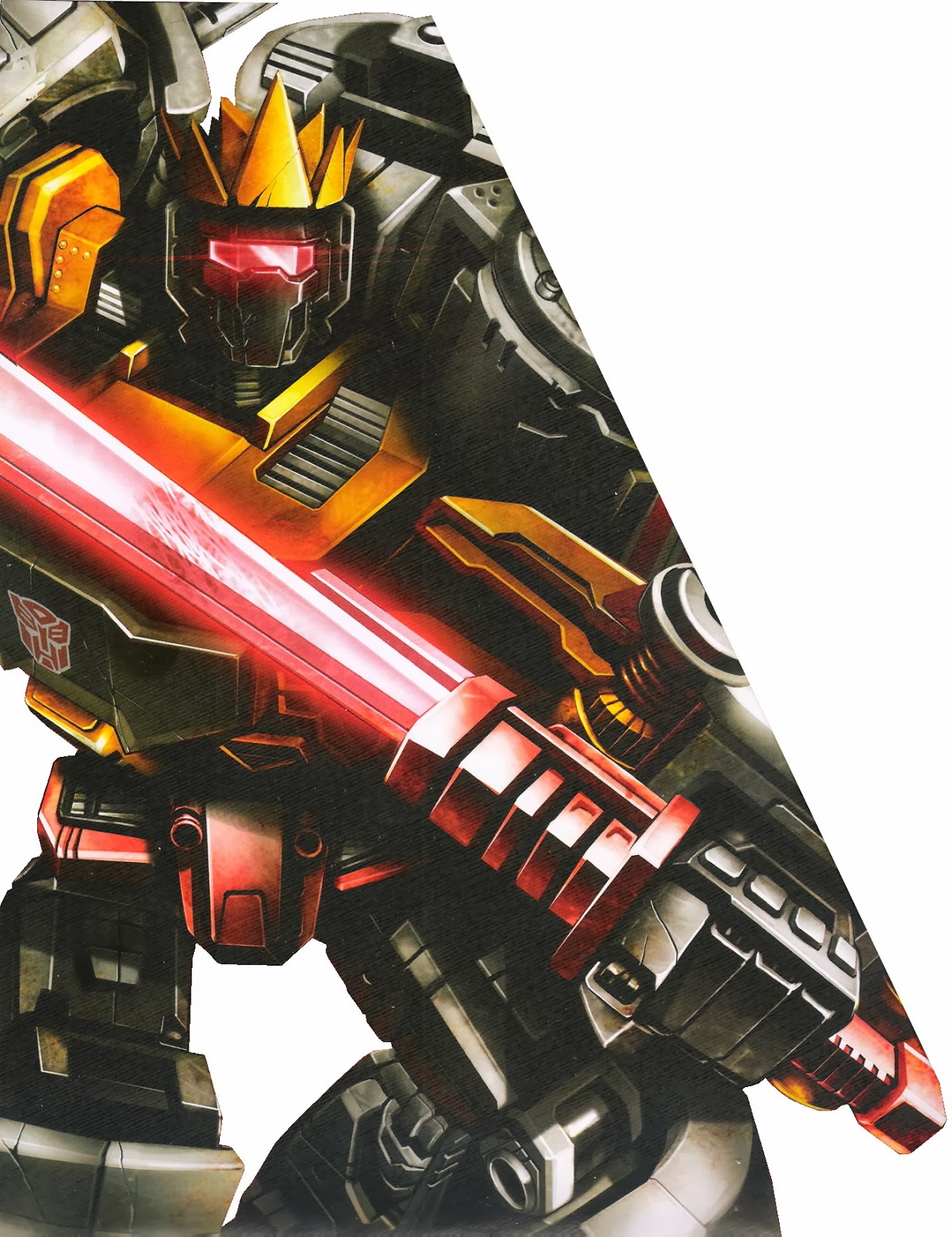 While there's still one more Decepticon to cover from the original 1984 cast of Transformers characters (and those who've been following this series can't have any mystery about who that is), my sense of balance dictates that we need to cover a couple more Autobot characters before we get to that Decepticon. Since there were only 28 characters in the 1984 group, that means picking out a couple of special "honorable mentions" to round out the "Thunderous Thirty." This is a purely arbitrary distinction based on nothing more scientific than who I, personally, think should go here. With that said, the first "honorable mention" goes to Grimlock. Grimlock was almost certainly destined to become one of the most prominent Transformers characters before he was even released. After all, he's a Tyrannosaurus rex, most popular of all dinosaurs (at least, until Jurassic Park came along. I'd argue that Velociraptors may be more popular these days), and as I pointed out back when I did a week-long feature on the Dinobots a few years ago, kids love dinosaurs! Even scientifically-inaccurate ones! (In the 1980s only scientists knew that the upright posture seen on G1 Grimlock couldn't be accurate for the T. rex. Even museums didn't start to catch on until the early 1990s. Nowadays, most folks who follow dinosaurs know that the T. rex's body should run parallel to the ground, not perpendicular to it.) 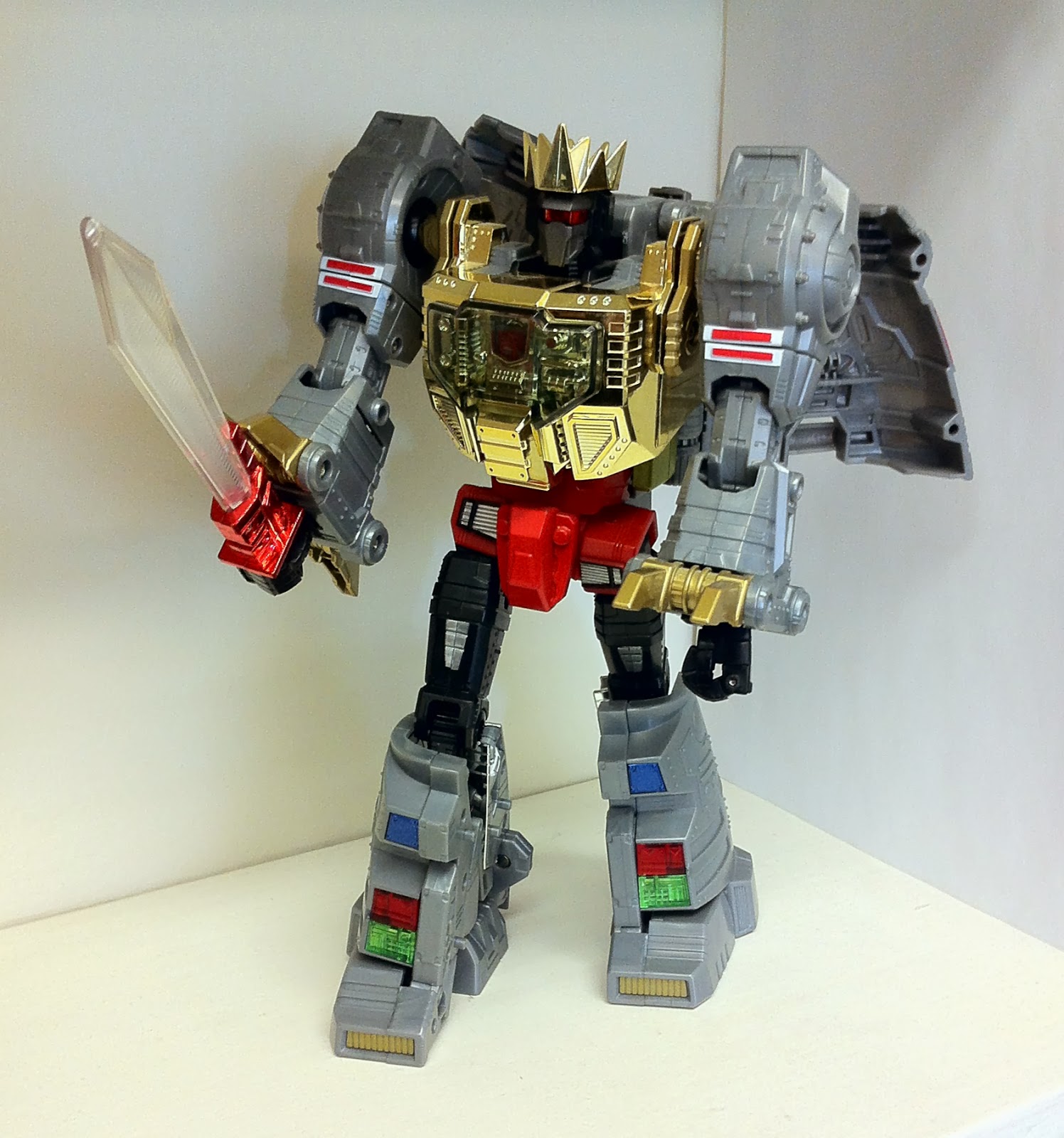 The oddity of Grimlock's popularity is that, even back in Generation One, there were two significantly different versions of the character. I've already discussed the Marvel comics version, which featured Grimlock on two distinct occasions as the leader of the Autobots (and not just his own Dinobot sub-faction, although the less said about his first stint as leader, the better). While this version was belligerent, he wasn't exactly stupid, so much as he's a rebel who prefers actions to planning (in fact, even his crowning moment of forethought and planning, late in the comic's run, came out of his rebellious streak). Cartoon Grimlock was barely intelligent enough to rise above the purely animalistic personalities of Decepticon cassettes like Laserbeak or Ravage (again, as depicted in the cartoon). He could talk, but he was really just there to smash things. This got even worse by the time of the cartoon's third season, where Grimlock was mostly just buffoonish comic relief. His lack of intelligence was such a significant plot point that an episode was written around the fact: "Grimlock's New Brain," whereby Grimlock was temporarily endowed with super-intelligence, which enabled him to build an entirely new faction of Autobots (the Technobots) before reverting back to his moronic self.

More recent depictions of the Grimlock character have perhaps tried to blend the two versions together, with a definite edge toward the comic interpretation. I think that this is a good thing. While I might argue that Grimlock has gotten too much attention in recent years (especially as written by Simon Furman as a foil to characters like Prowl, and almost always at the other characters' expense), he really is a fun character when used properly.
Posted by Mark Baker-Wright at 9:00 AM No comments: 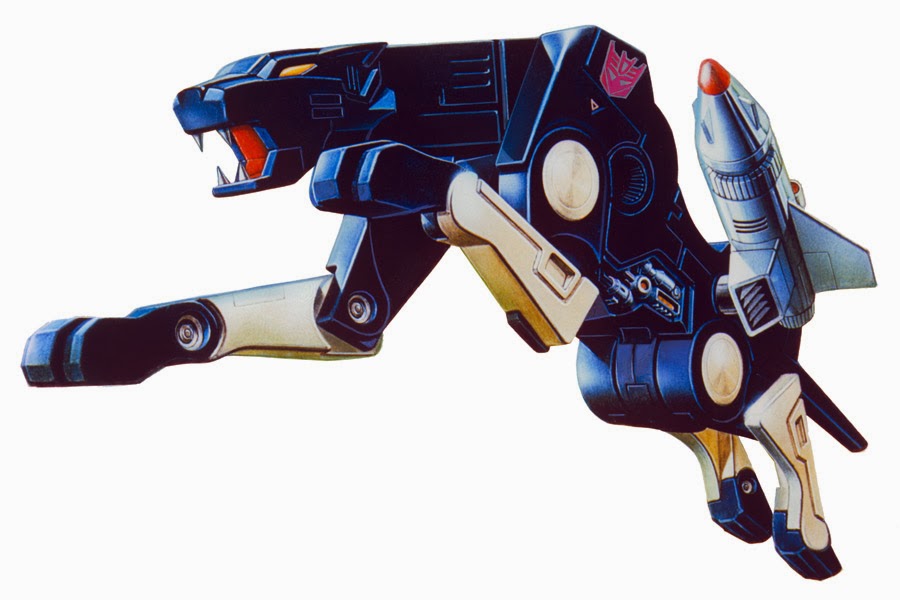 Some soldiers need constant supervision. They are either inept enough or untrustworthy enough that if you don't watch what they're doing, they're sure to mess things up for you in the long run. Ravage is the absolute antithesis of this soldier. Ravage needs no supervision. In fact, it's best if you just leave him alone to do what you need him to do. You can rest assured that he will not rest until he's completed the task to your satisfaction.

Provided, of course, that you're the rightful Decepticon leader. If you're not, Ravage could easily end up your worst enemy. 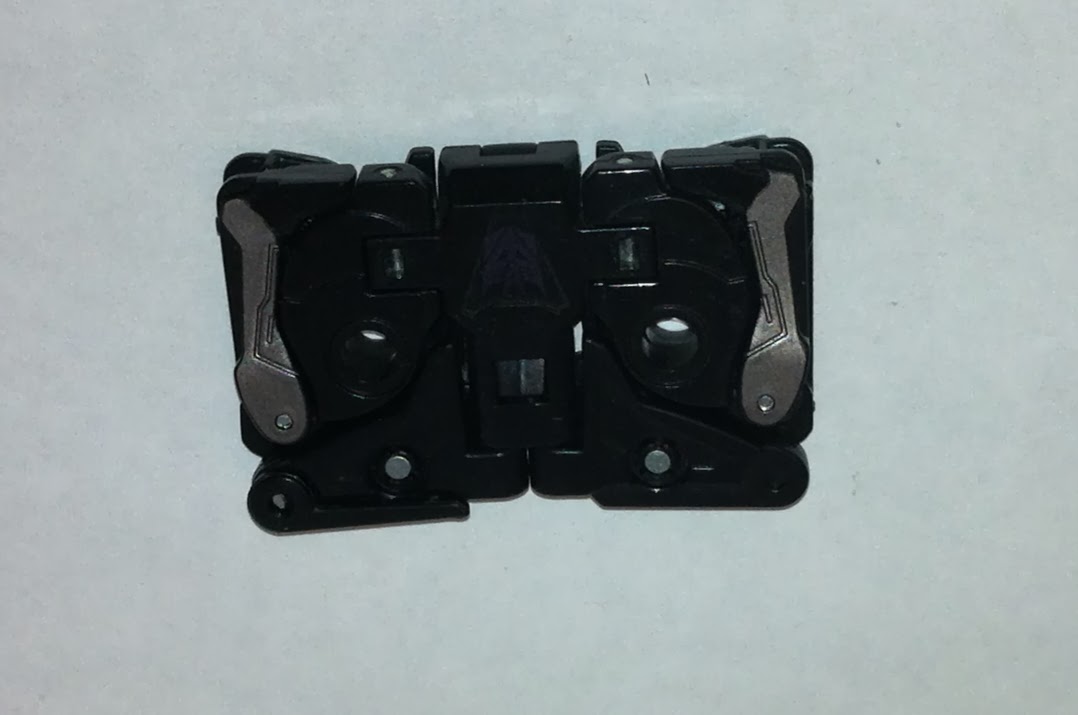 Possibly the most well-known of the Decepticon cassettes, Ravage has been reinvented more times than perhaps any first-year Decepticon with the exceptions of Megatron (about whom more later) and Starscream. He has appeared in nearly every Generation One-related form of media and toyline, and has even been seen in forms not strictly related to his original panther and cassette alt-modes. 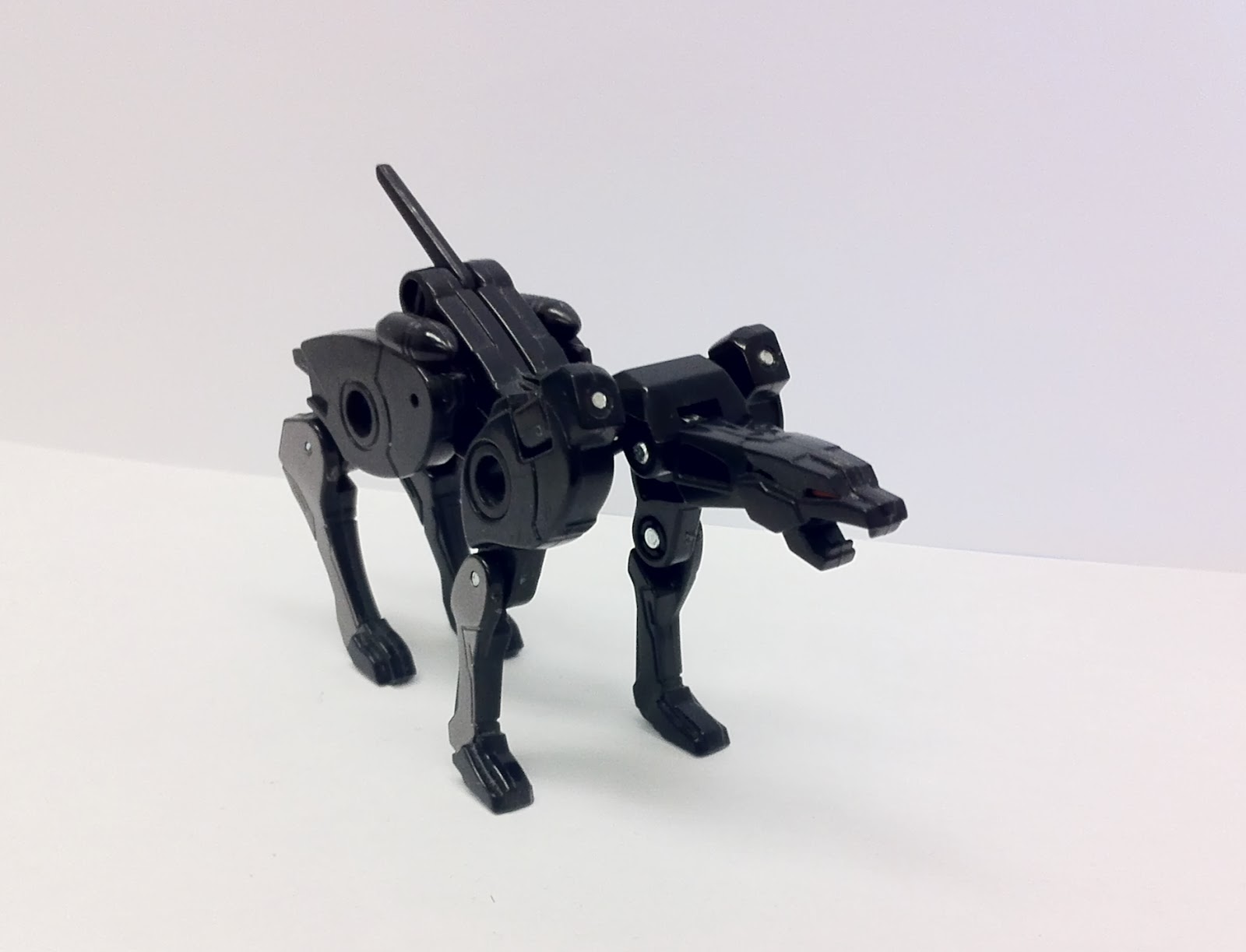 Ravage's characterization is a bit difficult to pin down. In the comics, he was able to talk, while in the cartoon, he was almost strictly an animalistic character. The thread that almost always connects these disparate versions is his ability to procure information through covert means. A creature of the shadows, Ravage is seldom seen until it is too late. Another near-constant is Ravage's sense of loyalty, which is perhaps rare among the Decepticon ranks. Whereas most other Decepticons can be seen to be working on their own agenda at some time or another, this is not the case with Ravage. He follows Megatron alone, does whatever Megatron needs him to do, and that's it.*

Ravage's popularity among Transformers fans was such that he was a rare example of a Generation One Decepticon that played an active part in the Beast Wars cartoon, attempting to serve his absent master one last time. Although that attempt ended in Ravage's own death, that hasn't stopped fans from looking for Ravage in other iterations of the Transformers franchise since. 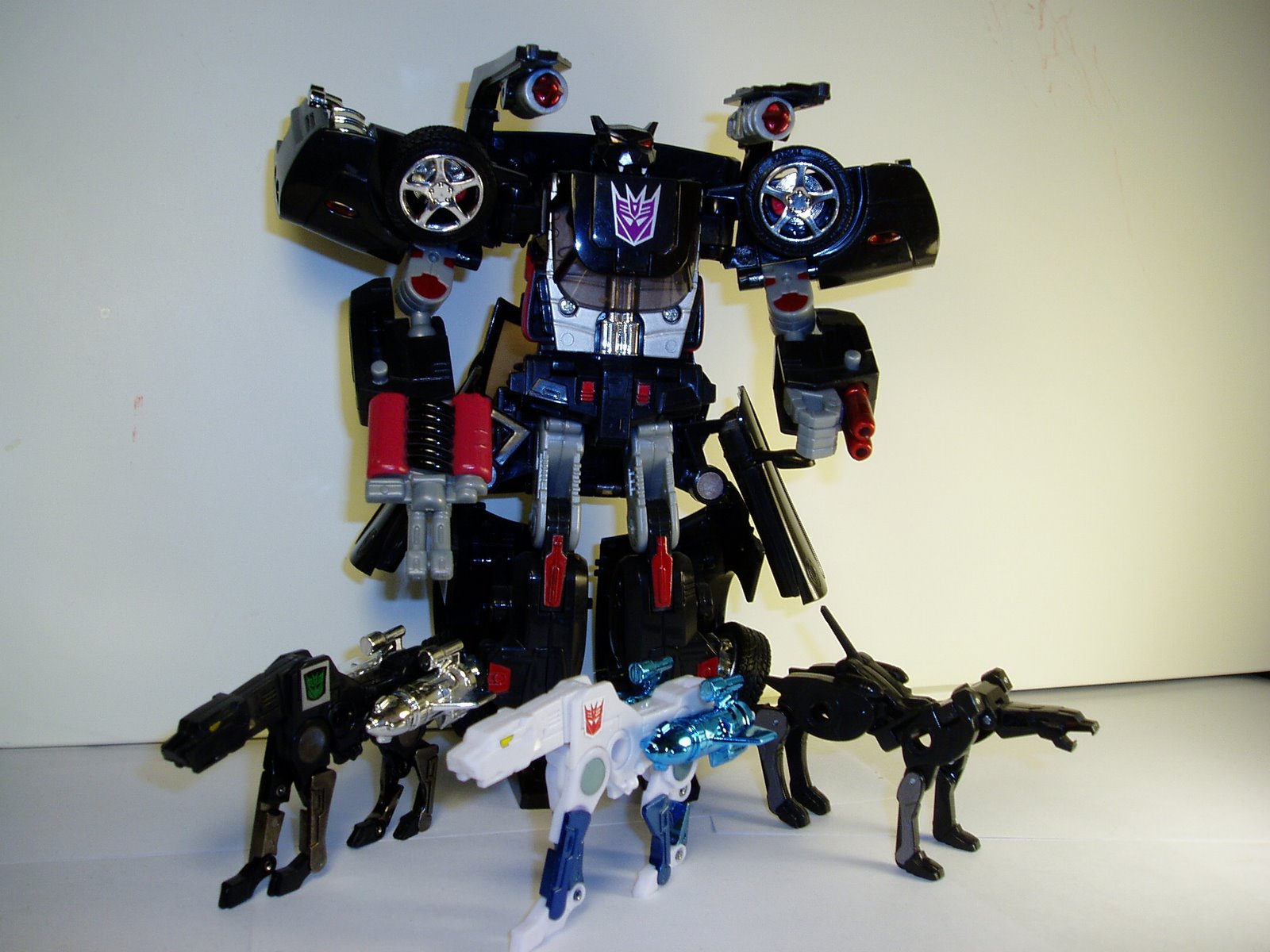 *I'm aware of at least two exceptions, whereby Ravage is seen to follow a Decepticon leader other than Megatron. In the first example, Shockwave had just beaten Megatron to a pulp, and demanded an oath of fealty from all other Decepticons. While Ravage might be legitimately said to take part in that oath, he's not really seen to be acting again until after Megatron is off the table entirely (if temporarily), and he immediately rejoined Megatron (against Shockwave) at the earliest opportunity. In the second example, Megatron was believed to be dead, and Ravage's (limited) actions in what became known as the "Decepticon Civil War" might well be justified as the kind of thing Megatron might have wanted him to do, were Megatron available to tell him so.
Posted by Mark Baker-Wright at 9:30 AM No comments: