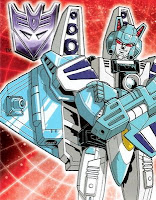 As an incentive to get people to actually come to BotCon, rather than just fork over the money for a non-attendee set or make arrangements to buy the figures on eBay, Fun Publications always includes one figure that is "free" with the main box set, but which is only given to people who actually attend the convention. This year, Leozack was that "attendee freebie." Leozack is an homage to a Japanese-only toy from 1989. 1989 Leozack was a member of the "Breastforce," which meant nothing more prurient than the fact that he had a breastplate that could transform into an animal (a lion, as perhaps indicated by Leozack's name) and then into a weapon. Kind of the "next evolution of Targetmaster," if you will.

BotCon Leozack avoids any of the potential of lascivious misunderstandings that have naturally arisen over the years via the concept of Transformers with removable breastplates (stop that! I mean it!) by making this toy a straight-up repaint of Energon Starscream. 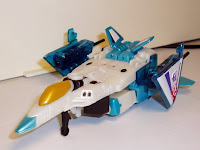 That's not to say that Leozack doesn't have extra weapons. It's just that he comes with the same ones that came with Energon Starscream. Here, for example, we see how Leozack's wings can fold down to reveal missile launchers. Of course, by removing the very things that would keep Leozack in the air, I'm assuming that the designers intend this to be some kind of odd tank mode, or some such. 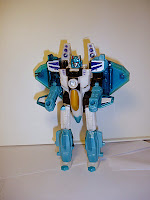 Recognizing Leozack's Japanese origins, the writers of this year's BotCon comic gave Leozack one of the most over-the-top personalities seen in a Transformer in recent years, as he displays a combination of Japanese anime stereotypes. For example, his Tech Spec bio card says that, due to the nature of his "experimental combat upgrades," Leozack actually has to shout out the nature of his weapons attacks before they can be activated. 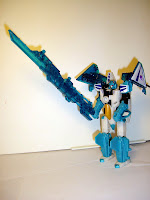 Given the personality Leozack has been given, the ridiculously long sword he has (if you combine the two energon weapons that come with him, and really, they make more sense combined than not) makes perhaps even more sense on Leozack than it originally did with Energon Starscream. Here's a picture of Leozack with those energon weapons separated and his missile launchers deployed in robot mode, perhaps ready to employ his "Great Power Rocket Swarm Attack."

I've always argued that I often care more about the characterization behind the robots than the toys themselves, and by that standard, Leozack is a lot of fun. I hope the folks at Fun Publications can find more ways to use this character in the future.
Posted by Mark Baker-Wright at 12:00 AM