There can be little doubt that Optimus Prime is the most iconic Transformer of them all. The sheer number of toys dedicated to the Generation One version of the character alone demonstrates the enduring popularity of the character. If further evidence should be needed, one need only observe what happened when the 1986 animated Transformers: The Movie came out. But I've told that story already....

But why has Optimus Prime been so popular? His quasi-religious ability to die and come back to life again (now so common it's become a cliché) cannot be the cause, as it was Prime's popularity that caused Hasbro to bring the character back after having killed him off for the first time back in the 80's, while quite a few other characters were allowed to remain dead without much notice.

To some, it may seem like Optimus Prime doesn't have much personality aside from a stereotypical "hero" archetype, and there is certainly some truth to this. While later interpretations of the character (notably under comics scribe Simon Furman) have given Prime additional layers of self-doubt and anguish, even these came after his original fan-demanded return to the world of the living. 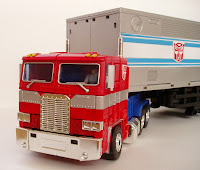 Indeed, I would argue that it is precisely because Prime fits our heroic stereotypes so well that he has been so beloved by so many fans. Prime is the one that can be depended on to save the day. When all hope seems gone, once Prime walks onto the screen, the viewer knows that everything will work out all right. I suspect that this was the intention even from the beginning. One can certainly hear overtones of "John Wayne" (best known for playing other iconic, if occasionally stereotypical, heroes from days gone by) in voice actor Peter Cullen's portrayal of the character in the original cartoon.

Now, nearly thirty years later, the concept of Optimus Prime is still beloved by many, although most children today are more popular with some other iteration of the character, whether through the live-action movies, or perhaps the recently-completed Transformers: Prime cartoon. While each of these versions represents its own unique take on the character (even if most of them today are still voiced by Peter Cullen), each one retains those heroic archetypes that made the original version so popular. If the history of the Transformers franchise has proven anything, it is that the concept of Optimus Prime will never die. 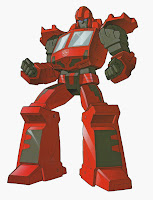 Ironhide is, as his name perhaps suggests, a tough guy. But while he shares Cliffjumper's penchant for action before words, Ironhide is far more kind-hearted, if a bit ornery at times. Perhaps that's because, of the original 1984 group of Autobots, Ironhide is said to be (in the words of his original Tech Specs) the "oldest" and "most battle-tested" among them, and thus Ironhide is able to allow some measure of wisdom to temper his aggressive impulses. 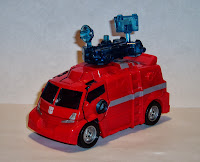 Ironhide isn't just "tough" in the sense of "ready to prove himself in a fight," but he's also "tough" in sense that his armor (his "Iron hide," if you will) is able to hold up against all but the most powerful of attacks. While Ironhide isn't stupid enough to just stand there and let his enemies shoot him before he fights back, he could almost get away with it.

While Ironhide may be one of the more memorable characters in the original cartoon (I can't say he did much in the comics), he has had the unfortunate distinction of not ever really having gotten a decent official toy representation of the character. The original toy (having been designed for a line where the robots were piloted mecha, rather than sentient beings in their own right) doesn't even have a head! Even the most recent toy, from 2008, is kind of a mess. I have therefore chosen to represent Ironhide by means of the 2005 BotCon toy, which wasn't even created with Ironhide in mind, although the fact that the mold shares characteristics with the original — most notably the detachable weapons platform — made the idea of an Ironhide version somewhat inevitable. Being one of the first BotCon toys produced by Fun Publications, even this toy is subject to some criticism, but honestly, it's the only G1-esque Ironhide toy I've ever bothered to own.
Posted by Mark Baker-Wright at 9:00 AM No comments:

A few years ago, a group of museums undertook a controversial series of exhibits designed to help teach audiences more about the human body. In many ways, the displays were much the same as the statues and models you would see at any museum. The crucial difference was... they weren't statues. Instead, real human cadavers (usually donated by either the family or the person themselves prior to the body's death) had been preserved. In many cases, the bodies had been surgically opened in ways intentionally designed to display vital organs. For those able to get past the "ick" factor, these exhibits helped people to understand the mysteries of the human body in ways not previously possible.

Now imagine a similar display, but without the educational component. This is done strictly because someone thinks it makes for good art. As controversial as the educational exhibits were, surely this raises the controversy level even further. Buzzsaw is this kind of artist (Yes, I am aware that I'm supposed to be discussing Transformers here!). Perhaps imagining the bodies as robots makes the whole thing sound a bit more palatable, but remembering that Buzzsaw is, himself, one of those robots, it's hard to escape the implications.

Being almost physically identical to Laserbeak (Laserbeak is red while Buzzsaw is golden), it's perhaps no surprise that most of the fiction of the 1980s focused on one to the exclusion of the other, and Buzzsaw's artistic inclinations aren't touched upon as often in the stories as his Tech Specs bio perhaps might suggest. Even so, when Buzzsaw did appear, he often made an impression, if perhaps less upon the reader than on the Transformer he chose to exercise his skills on!
Posted by Mark Baker-Wright at 6:30 PM No comments: 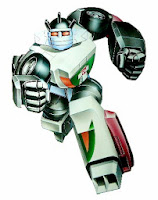 When you've got a job to do, but the tool you need to do it just hasn't been invented yet, Wheeljack is the guy you call to get it done. Of course, you're just as likely to find your project destroyed in the ensuing catastrophic malfunction, but hey, any chance is better than none, right?

Wheeljack was a fairly prominent character in the old Transformers cartoon, and so is remembered fondly by most fans old enough to have watched it in the first place. If I had to choose a particular example of something that Wheeljack is remembered for doing, it would have to be the creation of the Dinobots, which actually exemplifies Wheeljack's potential for causing as much damage as good quite nicely. After trashing the Autobot's headquarters, the newly-created Dinobots were ordered to be deactivated. However, by the end of the episode, Wheeljack had more than demonstrated the Dinobots' value to the team. But one still has to wonder why he created them with "dinosaur-accurate" simple brains in the first place.... 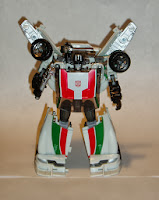 Many fans have taken to calling Wheeljack a "mad scientist," as his original Tech Specs bio itself does. But Wheeljack isn't the "try to take over the world" kind of mad scientist. He definitely has the best of intentions. It's just that Wheeljack really loves a challenge. He'll figure out a better way to do something if it kills him.

Posted by Mark Baker-Wright at 10:00 PM No comments: