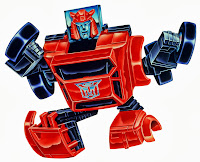 Some Autobots are cool, calm, rational beings. These are robots who strive for peace at all times, looking for the least violent solution to every situation, even while recognizing that they are in a battle against evil.

Cliffjumper is not one of these Autobots. 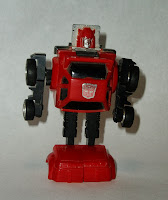 This is not to suggest that Cliffjumper is someone who, like Sunstreaker, blurs the lines between good and evil. To the contrary, Cliffjumper has very clear ideas of right and wrong. Cliffjumper's attitude is more along the lines of "if you're not for us, you're against us." This black-and-white ideology, coupled with a hot temper and an impetuous nature that nearly always causes him to act first and ask questions later, does mean that Cliffjumper can often get himself into trouble, and he can possibly make a bad situation worse if his impulses aren't kept in check by his fellow Autobots. But in emergency situations where decisive action is required, Cliffjumper is a great Autobot to have around. 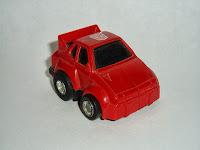 Believe it or not, Cliffjumper's original 1984 alternate mode is actually supposed to be a Porche 924, but the "Penny Racer" super-deformation inherent to all of the early Minicars obscures this more than a little bit. Indeed, it's pretty easy to see why so many kids thought that this car was the same vehicle as Bumblebee's Volkswagen Beetle, just in red, despite the real cars looking little like each other. This misconception hasn't been helped by the fact that most more modern Cliffjumper toys (with one notable exception) have been Bumblebee repaints or remolds. Surely this is a wrong that Cliffjumper should be fighting to make right!

What a different world we would have lived in, if Starscream, arguably one of the most prominent characters in the entire Transformers franchise, had kept the name he was given in the original story treatment by Jim Shooter. I think we can all breathe a sigh of relief that Marvel comics Transformers editor (and later writer) Bob Budiansky decided to change "Ulchtar's" name to something less bizarre. 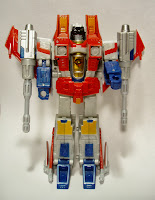 Of course, whatever name he ended up with, Starscream came to be so well-known because of his persistent attempts to take over command of the Decepticons from Megatron (and, perhaps, because of Megatron's persistent inexplicable refusal to have Starscream destroyed for his insubordination... well, the animated movie notwithstanding, of course).

One actually wonders how Starscream got to the position of authority that he has (his Tech Specs function is "Air Commander"). None of the other Decepticons seem to respect him, and few seem to truly fear him. It would seem that to be an effective leader, you'd have to have at least one of those two qualities. Besides all this, let's face it, Starscream's a bit of a coward. He acts all tough for as long as he seems to have more power than his opponent, but the minute the tables are turned, he starts to panic and whine like a frightened child: "Please don't hurt me! I'll be good! Honest!"

That's not to say that Starscream hasn't had a few moments of triumph. In the cartoon, he was responsible for the (re)creation of the Combaticons, and had both the Autobots and Decepticons at his mercy... until the Combaticons turned on Starscream, too. In the comics, powered by the Underbase, he destroyed entire swaths of characters (conveniently no longer available in stores)... before he himself was destroyed (temporarily) by the very power source he was using.

That's just how it is for Starscream. He can indeed be truly dangerous for short stretches, but he inevitably fails due to his own impatience and incompetence.

But he's just so much fun to watch....
Posted by Mark Baker-Wright at 9:00 AM No comments: 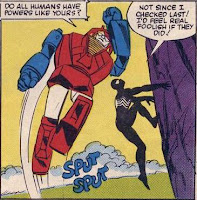 Given his bright red-and-blue color scheme, it's perhaps no surprise that Gears often makes me think of Superman. This image from issue #3 of Marvel's 1980's Transformers comic (his only significant appearance in that series) of Gears ascending alongside Spider-Man probably helps support such an idea.

Too bad Gears is such a grouch. 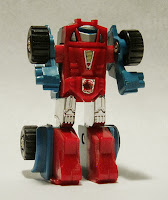 To be fair, his original Tech Specs bio suggests that at least some of this grumpiness is an act, as he hopes to boost his comrades' spirits (presumably in need of it due to their exile on Earth and the ongoing war with the Decepticons) as they try to boost his. They also say that he can be airborne (he doesn't really fly, per se, but he can shoot into the air like a rocket, controlling his decent through compressed air beneath his feet) up to 20 miles, which is well into the stratosphere. Actually, that's also in keeping with the Superman motif, especially when you consider that the original version of the world's most famous superhero couldn't really fly, either, but was limited to a literal (rather than figurative) ability to "leap tall buildings in a single bound." 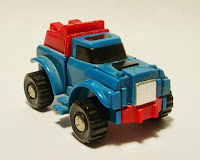 Oddly enough, despite nearly all of the original cast of Transformers characters having received official updates in recent years, this toy from 1984 remains the only one (not counting reissues) for the original Generation One character to date.* The character of Swerve, whose original 1986 toy was a remold of Gears, is getting the latest of what has been a string of updates, reportedly due in stores next month, but there's still been no word yet that a new Gears will be made, although the possibility of a remold/redeco of that upcoming Swerve toy is perhaps the best chance for a new version of Gears we've had in ages.

Sounds like something else for Gears to complain about.
*The name Gears has been used on a toy related to the Revenge of the Fallen line in 2009, but that's not only not the same character, but the toy really bears pretty much no resemblance whatsoever, so it's hard to even call it an homage, despite obvious conscious attempts to use blue and red in places.
Posted by Mark Baker-Wright at 9:00 AM No comments: 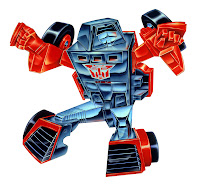 Poor Windcharger. According to the TFWiki, when the Transformers were introduced to the cartoon-viewing world with the three-part "More Than Meets the Eye" mini-series, Windcharger never got to speak, or even so much as get his name mentioned on-screen. It's no surprise that many Transformers fans (perhaps especially those who didn't grow up during the earliest days of the franchise) don't remember him.

Like most of these initial characters, Windcharger is remembered (by those who actually do) for a single signature ability. In Windcharger's case, his arms can function as powerful magnets. Yes, Windcharger is to the Transformers what Magneto is to the X-Men (except not evil!). In retrospect, I'm actually kind of surprised that no official Windcharger toy has ever incorporated magnets into the design. It's comparatively easy to do, and kids would have tons of fun with such a feature....

Windcharger's original Tech Specs tell us that he's the fastest Autobot for short-distances (of course, this really only applies to the original characters, as obviously faster characters were developed later). This is in keeping with his sporty Pontiac Trans-Am alternate mode, although like Windcharger's smaller-robot buddies, his proportions are super-deformed rather than realistic. Of course, this less-than-authentic detail didn't stop me from taking a spare toy and painting it black to resemble KITT from the original Knight Rider. And, besides, it's not like most modern car-type Transformers adhere to realistic stylings, anyway, as that tends to require licensing from the car companies, and can be expensive. That said, it's hard not to argue that the more recent Mustang/Camaro hybrid version of Windcharger (featured last year) is a better toy, and I'm still glad that I went to the effort to pick it up. In fact, I've since picked up the nearly-identical Japanese version of the toy so that I could get the all-black "Wipe-Out" toy that comes with it. I haven't yet decided to add a red scanner to the front of Wipe-Out to turn him into a new version of KITT, however.
Posted by Mark Baker-Wright at 9:30 AM No comments:

When I wrote about Rumble, I commented on how only about a third of the original Transformers were actually Decepticons. Fully half of those are, in fact, characters that turned into cassettes when they were originally introduced. If these entries were done in the vein of my usual toy-centered Transformers posts, that would mean a bunch of entries with nearly identical alt-mode pictures. One of the reasons I'm looking to focus more on the characters in this series is an effort to shake that pattern up a bit, allowing for toy images, yes, but hopefully introducing a bit more variety into the mix. 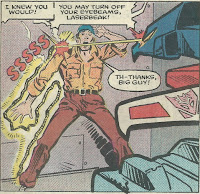 Laserbeak is said to be the Decepticon interrogator. There is at least one time in the old Marvel comics where Laserbeak is seen to be involved in an interrogation, and by all appearances, he was no doubt generally successful in this role. That said, I don't think most Transformers fans specifically remember Laserbeak as an interrogator, first and foremost.

Although Laserbeak was occasionally seen taking part in major battles, he was much more frequently seen playing the part of spy. This is perhaps especially fitting given Laserbeak's well-established cassette alternate mode (or even the data disc mode used by the Fall of Cybertron version, seen here on the left), but the other cassettes seem to have used their modes for espionage-related purposes far less frequently than did Laserbeak. Even so, I wouldn't say that "spy" was Laserbeak's main function.

Laserbeak's main role, it seems to me, was to inform the world who the leader of the Decepticons was. Being something of a coward, Laserbeak was not an especially loyal follower, known to change shoulder-sitting preferences to whoever happened to be the commander of the moment. This bit of visual imagery was seldom (if ever) explained outright, but it was nonetheless fairly common. Need convincing? Take this little exchange from the comics when Shockwave conceded that Megatron was indeed more fit to command. 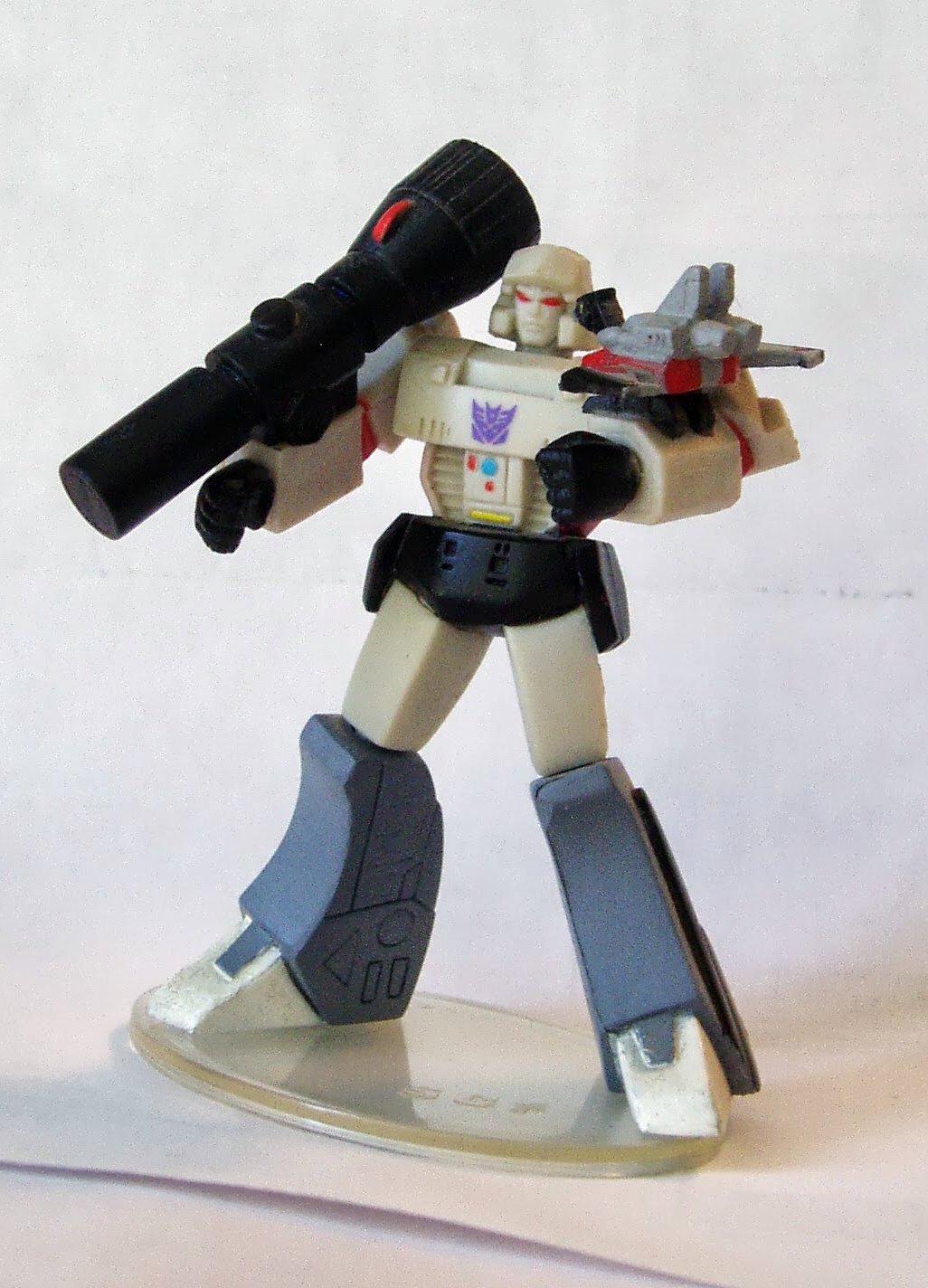 Posted by Mark Baker-Wright at 10:45 PM No comments: