It's a bit hard to properly talk about Bluestreak's character without also getting into the long-standing oddity of his name (long-time readers know all this already, of course). Put bluntly, the character has no blue on him whatsoever. Bluestreak's introduction in the Marvel Comic explains his name thusly: "Nice to hear how you got your name, Mirage. Now, I got mine, Blue Streak (sic) by being as fast as a blue streak -- whatever that is. Some wise guys even said I talk a blue streak -- whatever that is. Anyway, here I am."

As I explained back in June, no official Transformers toy (either by Hasbro or its Japanese counterparts) has ever featured Bluestreak in the blue color scheme from which the character seems to get his name (the above-stated reason notwithstanding)*. This has led to tremendous confusion among fans who swear they remember seeing a toy of this coloration when they were kids. Indeed, this is largely why Hasbro took to calling the character "Silverstreak" in years when the name "Bluestreak" was unavailable to them for trademark reasons. 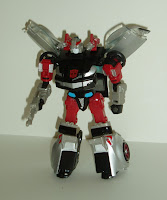 Whether it explains his name or not, Bluestreak certainly does talk a lot, and writer Bob Budiansky uses this quirk to give Bluestreak some ironic character depth. Bluestreak talks so much to hide his pain at having witnessed his home town being destroyed by the Decepticons (the original toy's Tech Specs aren't entirely clear about Bluestreak's having witnessed the event, but the extended bio upon which these were based, which appeared in the Transformers Universe comic, spells this out. Indeed, that bio points out that Bluestreak was the sole survivor of that incident). This helps Bluestreak to become a very conflicted character, having tremendous power at his disposal as a warrior, but despising war having seen first-hand what it can do. However glib Bluestreak sounds as he jabbers away about something that seems meaningless, one can be assured that he will never see his role in the ongoing battle against the Decepticons in such a glib manner.
*While I've heard the expression "talking a blue streak" used in the way Bluestreak describes here, I have to confess I'm not sure if the term actually existed before 1984. Urban Dictionary was no help whatsoever on this. I assume that Bob Budiansky didn't just make the term up out of nowhere, but would appreciate any pre-1984 confirmation anyone is able to share. By the way, before someone points out this toy as being blue, I don't count that toy as being of the G1 character, apparent-but-vague-intentions notwithstanding.
Posted by Mark Baker-Wright at 10:30 AM No comments: 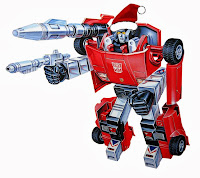 Quite early in Sideswipe's original Tech Specs, we are told that he is "less cold-blooded" than his twin brother Sunstreaker. Given that we've already seen that Sunstreaker is rather a nasty piece of work (at least, for an Autobot), such a statement may well be damning with faint praise. The fact is, Sideswipe is indeed a fighter who is by no means above using "underhanded tactics" (another phrase straight out of those Tech Specs).

Sideswipe was one of several Transformers (including the aforementioned Sunstreaker) that turned into a Lamborghini of some type or another (Sideswipe is specifically a "Countach" model). Lamborghinis were apparently very popular in the 1980s among those who paid attention to such things, but I have to confess that I'd never actually seen a Lamborghini in real-life until my arrival in Southern California in the late-90s! I imagine that part of the reason for this is the fact that Lamborghini's very extremely expensive. One could easily pay $100,000 for the model of vehicle that Sideswipe represents back in the 1980s (and that's in 1980's dollars!). 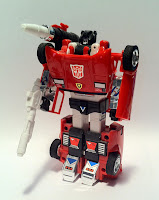 Sideswipe definitely has a strong ego, as might be expected of a robot that turns into such a fancy alternate mode. However, Sideswipe's ego is much more focused on his fighting prowess than it is on keeping himself in pristine condition (that's Sunstreaker's department). In fact, one of Sideswipe's most well-known abilities is the fact that his arms act as pile drivers, enabling him to punch through rock and create tunnels. Not something that someone who cares about keeping his paint free from chipping would be likely to do! Of course, readers of Sunstreaker's article may remember that there was a likely bio-swap sometime early in the development process. This is especially relevant in Sideswipe's other well-known ability, that of possessing a rocket backpack, making him one of the few early Autobots with an explicitly-stated (if limited) ability to fly. Good luck finding any features on the toy itself that relate to that purported feature! Nonetheless, these are the characterizations and abilities that have become a part of the fiction, and there are more than a few examples of Transformer characters revealing whatever part or equipment they might need, seemingly out of thin air, whenever a plot might require it.
Posted by Mark Baker-Wright at 12:30 PM No comments:

Previous studies of the original cast of Transformer characters have shown a few times where an Autobot character blurred the lines between "good guy" and "bad guy." This complexity was not limited to the Autobots. Thundercracker is perhaps the earliest example of a Decepticon who, although undeniably on the wrong side, is just unsure enough about why he fights on the side that he does that one can imagine possibly swaying him to come over and join the good guys.

That said, Thundercracker's never quite defected to the Autobots' side yet.

For one thing, Thundercracker has a definite superiority complex. He can fly. Most Decepticons can. Most Autobots can't. Humans certainly can't. According to Thundercracker, those who can fly are better than those who can't. For Thundercracker to become an Autobot, he'd have to come to an epiphany on the value of life that goes against some of his most fundamental beliefs.

There's also the fact that his fellow Decepticons would make life very difficult for Thundercracker (if, indeed, not outright impossible) if they suspected that he might betray them.

I've stated before that Thundercracker, along with fellow Seekers Starscream and Skywarp, was one of the very earliest "repaints" in the history of the Transformers franchise. I've managed to used toys for three different molds for each of the Seeker entries in this series of "Thunderous Thirty" posts, but it bears noting that every one of the molds used in these three entries has been used for all three characters (although the Skywarp toy using this mold may not quite be in stores yet at the time of this posting). This particular mold represents the Seeker form as it appeared in the "Fall of Cybertron" video game, thus representing a pre-Earth form, which has since been "re-adopted" by certain characters in the modern IDW G1-related comic lines. In fact, this particular Thundercracker toy comes with a pack-in comic that demonstrates his sense of uncertain loyalties rather nicely.
Posted by Mark Baker-Wright at 4:30 PM No comments: 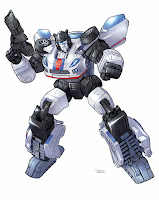 Being Optimus Prime's right-hand man sounds like a heavy responsibility, but you'd never know it to listen to Jazz. An enthusiastic lover of Earthen culture (and especially its popular music), Jazz is almost always positive and upbeat. It's not that Jazz is unable to see the harsh realities of the war he's involved in. Far from it. In fact, Jazz is often right there taking part in the most dangerous assignments, doing whatever it takes to keep the evil Decepticons from destroying everything important. 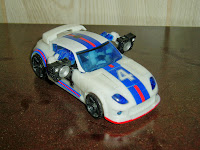 Whatever needs to be done, Jazz not only can find a way to do it, but he'll get it done in the coolest way possible. He's like what the Fonz from Happy Days might have been like if the Fonz was an Autobot (and if the Fonz's jukebox played music from the 1980s rather than the 1950s...). 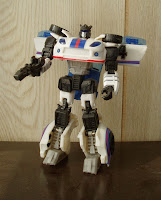 Jazz has a somewhat unusual distinction among the original cast of Transformers characters. Nearly all of those original characters were officially killed off in the animated Transformers: The Movie, but Jazz was one of a very few that was seen alive at the end. And even among those few, Jazz was one of the only ones to show up in the cartoon afterward. Unfortunately, Jazz was doomed to remain in the background, and his voice actor (the legendary Scatman Crothers) passed away that same year (although, given the lead time necessary to produce cartoons, nearly all of the episodes of season three had already been recorded by that time, so Jazz's relative absence during that season was probably intentional, and not a direct result of Crothers' decline). Even so, those late background appearances demonstrate Jazz's popularity, which has only grown in the decades since.
Posted by Mark Baker-Wright at 10:30 PM No comments: 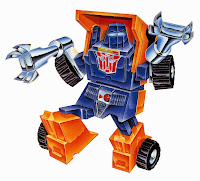 Although it's fair to say that most of the characters in the Transformers franchise are combatants of one type or another, it's equally safe to say that many of them are not fighters, first and foremost, but are rather support personnel. Those you call upon to make sure that everything is working properly so that the ones who do fight are able to do so effectively. 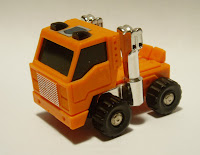 Huffer is a construction engineer. This puts him in a category similar to Wheeljack, insofar as it's his job to create whatever is necessary for the Autobot cause, and indeed their functions do overlap to some degree. The main distinction is that Wheeljack works mostly on equipment and/or machinery, while Huffer maintains the buildings and/or installations themselves. 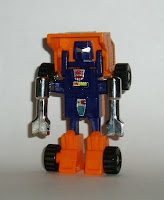 Huffer's personality is also different than Wheeljack's. While Wheeljack is pretty much always upbeat (even when he's done something to injure himself), Huffer is a complainer.

It's not so much that he's a defeatist. Indeed, just after he's told you something can't be done, he's almost certain to go ahead and prove that it can. He seems not to realize just how reliable and capable he really is, even after he's demonstrated his abilities again and again. 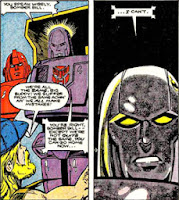 This almost certainly stems from Huffer's intense homesickness. Back when the Transformers saga began in 1984, the Autobots were not only trapped on Earth, but had been dormant for roughly four million years. They weren't entirely certain that their home planet of Cybertron even still existed, and even once they'd proven that it did, they still weren't able to get back there for quite some time. Indeed, depending on what version of Generation One continuity you follow, Huffer wasn't necessarily even still around to enjoy getting back home once the Autobots were finally able to do so.

Notwithstanding Huffer's pessimism, I have to admit that I rather like him. Sure, he's cranky and cantankerous, but he gets the job done. If I had to chose between a friend who was optimistic but flaky, and one who was grumpy but reliable, I'd almost certainly go for the latter.
Posted by Mark Baker-Wright at 9:00 AM No comments: