As I mentioned back when I reviewed BotCon Elita-1, "female Autobots" are a bit of a rarity. Of course, being robots, the very concept of Transformers as even having gender is a bit of an oddity, but whether it makes sense or not, most continuities suggest that there are male Transformers and female Transformers, with female ones being quite rare (there are female Decepticons, but they're even more rare!). Perhaps the most prominent female Autobot in Generation One was Arcee. But, to this day, G1 Arcee has still never been given a mainstream transforming toy (there was an exclusive made for BotCon 2001, although quite frankly this toy bears little resemblance to the character she's supposed to represent). In fact, if you only count mainstream retail releases, it took even longer for Hasbro to make any transforming Arcee toy than it did for them to make a Unicron! 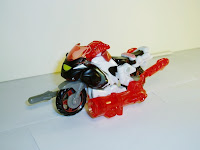 The first transformable Arcee available at retail was made for the Energon line in 2004. Arcee turns into a motorcycle, a mode that has since been used for other Arcee toys, and it seems that these toys get repainted to represent other "female" characters quite a bit. In fact, including the BotCon 2005 toys, this particular mold has been reused no fewer than six more times! I'm not at all clear on why a motorcycle is particularly "feminine," but there you go. 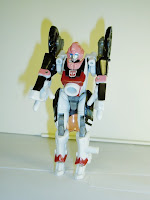 Although Energon Arcee is not actually intended to be the same character as Generation One Arcee, the homage is clear enough. Both Arcees have a predominately pink color scheme, and clearly "feminine" curves, including an... *ahem* enhanced chest. Energon Arcee has some of the wimpiest hands I've ever seen on a Transformer (at least, among those that actually have dedicated hands). They almost seem put on there as an afterthought, and aren't really any good for much anything. All in all, this toy is most definitely not what I would consider a movement toward gender equality. 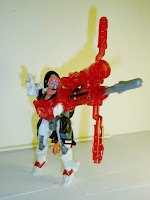 Energon Arcee is a member (in at least some accounts, the leader, perhaps to offset that gender inequity problem) of a subgroup called the "Omnicons." Unlike Generation One, where a "-cons" suffix was a clear indication of being allied with the Decepticons, "Omnicons" are Autobots (there were rumors before Energon started up of this group being called "Omnibots" — no clear relation to these guys — but that name apparently didn't clear legal). "Omnicons" were intended to be unique among Autobots for their ability to work with and shape Energon into tools and weapons. The transparent red star and other similarly colored parts with Arcee are intended to represent such Energon. The stars (called "Energon Chips") could be attached to other Energon Transformers to represent being given a power-up, which the other parts could be rearranged in various ways. Arcee's Energon parts are intended to form a kind of crossbow, but the design of the figure is such that the only way Arcee can actually hold it is to hold it way out to the side and take a wide stance with her legs. Even then, she's rather liable to falling over, so I feel fortunate that this shot turned out so well!
Posted by Mark Baker-Wright at 12:00 AM