While it is true that animal forms have been a part of the Transformers franchise since the very beginning, the transition to the Beast era is marked by a move away from strictly mechanical approximations of animals to more organic forms. A focus exclusively on animals (as was the case when the Beast era began) also meant a wider variety of fauna being represented. It is hard to imagine a Transformer based on a pill bug (called a "roly-poly" when I was growing up) having come out during the "Generation One" era, but by the Beast era, such a mode was by no means unusual. 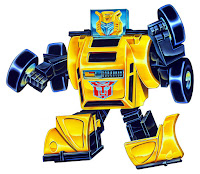