My wife and I put this parody together a number of years ago, about the same time we came up with this one. Riffing on hymns may seem a bit sacrilegious  but it's all in good fun. I definitely imagine the Disney version of the dwarfs when I think of this song:

(To the tune of "Let All Mortal Flesh Keep Silence")

Let all seven dwarfs keep working
In the diamond mines all day
Let them sing about their labors
As they earn their daily pay
Then they'll march on home, "Heigh-Ho! Heigh-Ho!"
To their house of stone and hay

(My wife, a professionally-trained musician, notes that one could segue straight into "Heigh-Ho" from here if you like.  It works really well!)
Posted by Mark Baker-Wright at 8:30 AM No comments:

Last week, I featured the 1950's version of the Tic-Tac-Dough board game.  This week, I'm discussing the 1970's version, which like the original version, seems to have come out roughly around the time of the show's premiere (1978, in this case, although the copyright actually says 1977 for some reason). The game play of the new show was rather similar to the original version, although they changed pretty quickly from shuffling only after both contestants had been asked a question to shuffling after each question. Also, center-box questions on the show became routinely two-part questions, as opposed to merely "more difficult" than other questions (although like the original, extra time was allowed for the contestant to consider a response). 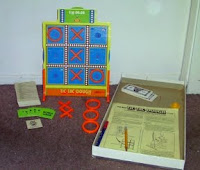 There's little point in denying that the 1970's board game itself is considerably cheaper than the 1950's version.  Instead of mechanical gears and a lever to shuffle the categories, the 1970's game settles for a mostly cardboard affair, using numbers for categories on a single rotating disk. This does, however, have the benefit of easily allowing for different categories in each game (I'm under the impression that one was supposed to order accessory kits to add new categories to the 1950's game, but I've never seen that these actually exist).

One oddity deserves mention that applies to both versions of the board game. The scorekeeper (a disk on this version; a pointer on the original) allows for rounds to be worth up to $1000.  Each box being worth $100 (or $200 for the center square). This is accurate enough to the daytime network versions of each show, but the 1978 network version of The New Tic-Tac-Dough didn't last very long, and the syndicated version (which lasted much longer) awarded $200 for each square ($300 for the center), which really isn't possible to do if you're limiting yourself to the board itself (of course, it's pretty easy to just grab a piece of paper and a pencil!).*

The other big difference in this version of the board game involves the Bonus game (a feature that the original 1950's show didn't have in the first place). Oddly enough, while the dollar amounts for the main game reflect the 1970's network version, the bonus game is instead taken from the syndicated version of that era. The game provides cards with the words "Bonus Game" on the back, and you are to lay these out on the table in a 3-by-3 grid. The contestant turns over one card at a time, which reveals either a dollar amount or a dragon. The contestant is allowed to add to their score the accumulated total of the dollar amounts revealed after each turn, or risk losing that amount to turn over another card. If the contestant reaches $1000, they win the Bonus game and receive a total of $2000 added to their score. If the dragon is revealed, all money from the Bonus game is lost.† This is somewhat different than the show, where two of the dollar amounts are replaced by cards that say "TIC" and "TAC," which award no money, but which will automatically yield a victory if both are selected. This actually makes the home version considerably easier to win than the real thing. The real game would also add a prize package (worth quite a bit more than $1000, in my experience) in addition to the money accumulated (rather than a set $2000), so perhaps the added risk evens out in the long run.
*I should also point out here that the 1950's show had a nighttime version where the values were $300/$500.
†I should point out here that the game actually gives you 12 cards, even though the instructions say you should only use 9. Basically, they give you 3 extra dragons for no apparent reason. The rules even make clear that there should only be one dragon among the 9.
Posted by Mark Baker-Wright at 12:00 AM No comments:

I've featured a few game show board games on this blog in the past, and it's high time I got back to doing a few more. This time, I'm going to feature the oldest such game in my collection: a 1956 or 57 (my sources differ on the year) edition of the game created for the original Tic-Tac-Dough. Jack Barry (later known to my generation as the host of The Joker's Wild before his death in 1984) is featured on the cover, and was indeed the original host of Tic-Tac-Dough. But since Barry was only host of the show for a few months in 1956, it seems reasonably likely that he had already moved on by the time this game would have been available.

Tic-Tac-Dough was a quiz show built on (as the name no doubt makes obvious) Tic-Tac-Toe. The game board features nine categories, a different one appearing in each square of a 3-by-3 grid. The returning champion, playing as "X," selects a category (and its corresponding square), and the host reads a question from that category. If the contestant gets the correct answer, an "X" is placed in that square, and the cash value of that square is added to a game pot. If not, the square remains unclaimed. The "O" contestant may then choose one of the remaining categories/squares to capture it in the same way. After both contestants have had a chance to answer a question, the categories would shuffle around the board, a feat done by virtue of a series of rollers on which the categories have been written. As in Tic-Tac-Toe, a player wins the game (and the accumulated pot of money) by capturing three squares in a row. 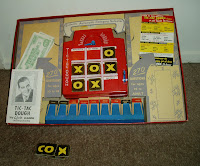 The board game really captures the feel of the actual show rather brilliantly. I'm especially impressed by how the board game duplicates the mechanism for shuffling categories, almost precisely scaled-down from what was done on the 1950s-era set. The categories are shuffled by pulling down on the blue lever to the right. The questions are contained on a series of cards held in a blue stand. While this means a lot of potential parts to be lost, it is much closer to how an actual quiz show host gets his questions than the standard "question book" that most game show board games of a later era would have.

The box proudly calls itself a "First Edition," but I do wonder just how many variations of this edition were made, as the images I've found elsewhere on the web of early 1950s-era Tic-Tac-Dough games use the form "1st Editon," rather than spelling the ordinal number out. Either way, it seems clear that the game comes from the time before the show was investigated for game rigging (as many game shows of that era were, most notably Jack Barry's most well-known show of the time, Twenty One). The board game continued to be released after that, but with all references to Tic-Tac-Dough removed, going by the name 3 In-A-Row Home Quiz.

Being born in 1974, I of course never actually saw the 1950s version of Tic-Tac-Dough when it was originally on. I've had to rely on the wonders of You Tube for that. I grew up with the 1970s/80s version, which had its own board game version released. I'll feature that next week, along with some of the differences between the two.
Posted by Mark Baker-Wright at 12:00 AM No comments: