Requiem for Toys R Us

If you've been following the news, you already know that Toys R Us, already in bankruptcy since this past September, finally announced liquidation this past week. While liquidation sales are not yet starting (at least, for those remaining stores not already having clearance sales since February, which were at one time hoped to be the only stores to have to close), they will very shortly, and the company, as we've known it, has effectively ceased to exist.* 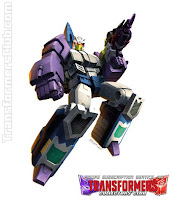 The recent fan poll conducted by Hasbro to promote their upcoming toyline paired Spinister (featured two weeks ago) with Wheeljack, Needlenose with Tracks, and Impactor with Mirage. I'll deal with Impactor next time, but for now, it's enough to say that Hasbro's reasons for these pairings are still a bit murky for the Spinister/Wheeljack and Impactor/Mirage options. For Needlenose and Tracks, on the other hand, a discussion of the IDW comics should make Hasbro's reasoning pretty obvious.