There is a sense in which, once you've talked about one of the Generation One Micromaster patrols, you've talked about them all. This is part of why I've only done so twice before in more than a decade on this blog (the Race Car Patrol and the Battle Patrol). That said, these are fun little Transformers that deserve more attention, especially now that Micromasters are making something of a comeback in the current War for Cybertron: Siege toyline. Having done two Autobot teams already, it's time to give some Decepticon Micromasters some love. While I could focus on a patrol that has a new release in that toyline (as has been the case with both of the aforementioned Autobot patrols, although only two members of each team have actually been released), I'm going to stick with these guys, who have yet to be announced for a modern update (a Combiner Wars release of Blackjack notwithstanding), but who hold a special place in my heart due to their role in a Marvel Comics storyline that brought both Ratchet and Megatron back to the limelight... if only for a moment. 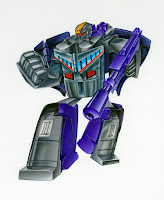 A few weeks ago, Hasbro conducted the latest of their Transformers fan polls. This time, the purpose was to determine which of four Generation One molds would be reissued in the Spring of 2020. The winner of that poll was Astrotrain, and since I've somehow yet to feature the original Astrotrain mold here, it seemed a good opportunity to do so now.