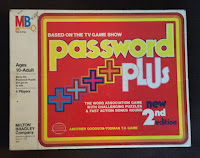 Five years ago, when I did a feature on the board game version of the original Password, I promised to do a future post on Password Plus. I didn't expect to take five years getting to it, much less to have moved to a new blog in the meantime, but the future is finally here!

That Time I Found The Quadrovelocipede from Legend 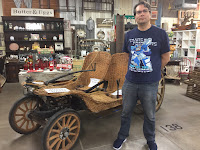 When most people hear that I'm a fan of Legend, they think I'm talking about something else. I can't really blame them. My version of Legend only lasted for 12 episodes, which first aired more than 20 years ago, on a network that no longer exists. The show is all-but forgotten. Indeed, although it was (amazingly) released on DVD last year, they had to change the theme music and some other musical cues for legal reasons, and I doubt it's sold especially well (Indeed, the DVD link in this sentence was found on the ninth page of search results for the name "Legend" on Barnes and Noble, after already filtering for "Movies and TV," under the "Top Results" sorting!). So I don't really expect people to quite understand how it is that the impossible happened last week. But first, some context.